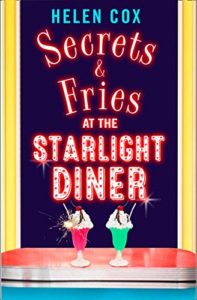 I’m very pleased today to be taking part in the blog blitz for Secrets and Fries at the Starlight Diner by Helen Cox. Thank you to Rachel Gilbey from Rachel’s Random Resources for the place on the tour. I’m going to be sharing an extract from a short story by Helen and I also have a lovely giveaway to tell you about but first let’s have a look at what the book is all about:

What brings Bonnie Brooks to The Starlight Diner? And why is she on the run?

As the front-woman in a band, Bonnie is used to being in the spotlight, but now she must hide in the shadows.

Bonnie only has one person who she can turn to: her friend Esther Knight, who waitresses at the Fifties-themed diner. There, retro songs play on the jukebox as fries and sundaes are served to satisfied customers. But where has Esther gone?

Alone in New York City, Bonnie breaks down in front of arrogant news reporter, and diner regular, Jimmy Boyle. Jimmy offers to help her. Can she trust him?

When the kindly owner of the Starlight Diner offers Bonnie work, and she meets charming security officer Nick Moloney, she dares to hope that her luck has changed. Is there a blossoming romance on the cards? And can Bonnie rebuild her life with the help of her Starlight Diner friends?

Sound good? Then the ebook is available now.

Hot and Cold at the Starlight Diner

I was at the 14th Street Restaurant when I heard. Gazing into Bernie Castillo’s brown eyes and weighing up whether or not I’d let him kiss me.

He’d combed his hair into a pompadour. Anything he did to imitate Elvis only boosted his chances of making out with me on the walk home, and he knew it.

I didn’t mind him kissing me. In fact, I think I enjoyed it. Sometimes, perhaps four seconds out of ten, kissing Bernie could make me forget myself. And back then, that was all I was interested in.

It’s incredible, the details you remember, about days like that day. A kid sitting in the corner, feeding a fork-full of blueberry pie to a stray dog that’d wandered in; the occasional snap from a red-haired girl, sitting up at the counter, blowing pink bubbles with her gum, and the deep orange of Bernie’s cardigan, blazing against the backdrop of the rundown restaurant. It’d opened in the thirties and hadn’t had so much as a lick of paint since then. The dark green leather of the booths was torn in places, baring sickly, yellow-sponge innards. I’d watched Peggy, a girl from my school days who waitressed at the restaurant, mopping the black and white tiles more times than I could count. But to look at them, you wouldn’t think it. There was no sparkle there. No shine.

Still, it was the best place in Little Spain for milkshakes. And so, it’s where Bernie always took me.

‘I tell ya, one day I’m gonna have a place just like this one. People always gotta eat.’ The skin just above Bernie’s nose crinkled as it always did when he spoke from the heart.

‘Lose the gristle in the burgers and the broken ceiling fans, and you could really have something.’ I teased. He was forever talking about going into business, every day promising himself he’d quit his job at the gas station on 8th Avenue. But his widowed mami was still washing oil out of his overalls, and right then I had no reason to suspect that would change.

‘You could waitress.’ He grinned, before taking a sip of his milkshake.

‘Oh, great. A waitress. That’s real neat for a straight A student. Thanks a lot.’

‘Beats selling over-priced clothes to snobs the rest of your life.’ said Bernie.

‘Does it?’ I smirked. But he knew I’d even take waitressing over my position in the clothing department at Lord and Taylor. The other girls who worked there loved being around the luxurious fabrics and flirting with the men buying new dresses for their wives or mistresses – whoever was sore at them that week.

That, I’d known all my life.

Bernie, noticing my smirk sagging at the edges, reached his hand over and ran his fingers through my hair. It was long and dark, swept into a side pony tail and tied with a ribbon of royal blue.

‘Rita…’ he started but never got to finish.

Because right then, a cry sounded out.

Bernie’s eyes darted towards the counter. I turned and saw Peggy, tears streaming from her eyes. Her blonde curls bouncing as she shook her head, left to right and back again. She brought both hands to her mouth; squeezed her eyes shut.

There was nothing so unusual about Peggy crying. Once in the school hallway, I’d seen her cry over a chip in her French pink nail polish. As though anyone gave a damn about manicures when the Russians were plotting to drop a bomb on us. Or so we were told.

But somehow, I knew Peggy’s tears were about more than nail polish or whichever jock buffoon had broken her heart that week. Her sobs were like a child’s, one who has lost its Mami or Papi and believes itself alone.

I don’t know who said the words but when they were spoken every soul in the place heard, as the restaurant had already hushed at Peggy’s hollering.

‘The President’s been shot.’

A wave of questions from all but me:

‘Is he really dead? I can’t believe it.’

‘Did it happen in Texas? Who’s the shooter?’

The Twist by Chubby Checker played on the juke box. I remember because the song seemed to get louder. Impossible, of course. Why would anybody go to the trouble of turning up a juke box just then? But it seemed someone had. Even the vanilla in my milkshake tasted real strong all of a sudden. To this day, vanilla turns my stomach.

The questions dried up. Tears flowed. Even some of the guys started sobbing. But not me. I hadn’t cried in as long as I could remember and not even a dead president could change that.

Staring over at Bernie, I noticed his eyes had glazed over.

‘We gotta get outta here,’ he said, his voice low, almost rusty, like it was a strain to speak. ‘Gotta get to a TV lickety-split. See what the hell’s happened.’ He slapped three dollar bills on the table, dropped his grey trilby down on his head, grabbed my hand and yanked me out of my seat. I had only a second to snatch up my crimson swing coat, which trailed behind me as we scurried out into the November chill.

In silence, we walked back towards my parent’s apartment. Outside, people who’d heard wept in the streets, crying without even having to try for it.

Others were quiet. They stood stock still, staring either at the ground or at the sky, anywhere but at each other.

I don’t know why. I never knew why. But in the saddest version of my voice I’d ever heard, I started to half-sing the chorus to The Twist. I sang, while everyone else was blubbering.

‘Rita.’ Bernie turned me to face him, square on. He took hold of both my shoulders. Shook hard. ‘Don’t start with that right now, Goddamnit. You can’t do that right now. Not now…’ Glaring deep into my dry, green eyes, the tears in his finally broke their seal. He pulled my body close. Wrapped his arms around me. Cried. And for the first time in a long time, I wished for something.

Breathing in Bernie’s cologne, which had strong notes of cedarwood, I peered over his shoulder into a nearby shop window. My eyes fixated on a mannequin.

What I’d have given to be that blank slate of a woman. To stand so still, so oblivious. To never question this world I was born into. A matter nobody took the trouble to consult me on. Wouldn’t that be at least polite?  For somebody to ask if you wanted to be born.

They could hold a short meeting about it, conducted by one of those men in dark suits I used to see scuttling down Wall Street. They no doubt believed themselves important enough to deputise for God.

‘Want to be born into a world where your role is already decided? There’s death and war and oppression but we’ll throw in a nice dress or two. And a pair of shoes that’ll crush your toes and make the soles of your feet burn. A special perk for you women.’

They’d tell me my place. The home. The kitchen.

They’d tell me when people die, you cry. And if a boy looks your way, you smile. And so long as you never think, you’ll do just fine.

‘Would you like a place in this world, Miss Rita?’ As a thank you to signing up to the mailing list you will receive three short stories too. Helen Cox is a book-devouring, photo-taking, film-obsessed novelist. If forced to choose one, Helen’s Mastermind specialism would be Grease 2. To this day, she still adheres to the Pink Lady pledge and when somebody asks her if she is a god she says ‘yes.’

After completing her MA in creative writing at the University of York St. John Helen found work writing for a range of magazines, websites and blogs as well as writing news and features for TV and radio. She has written three non-fiction books and founded independent film publication: New Empress Magazine. She currently lives in York and writes novels.