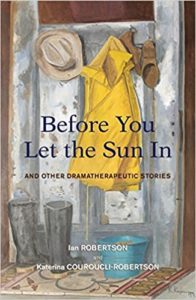 It’s my turn on the blog tour for Before You Let the Sun in by Ian Robertson and Katerina Couroucli-Roberston. I’d like to thank Natalie and Rox from The Book Publicist for asking me to take part. I will be sharing an extract with you today but first, here’s what the book is about:

This book consists of ten case histories that cover a wide range of themes from obesity to depression. One woman is trying to come to grips with past memories, another cannot escape from a passionate love with no future, an adolescent immigrant is trying to overcome a persistent stammer, a fifty-year-old man decides to separate from the love of his life rather than compromise with his principles.

Writing in the first person, the dramatherapist describes her reactions to and interaction with the client as well as some of the techniques used in the therapeutic process. The stories are based on real cases, but in order to conform to the story-telling genre they contain a beginning, middle and end, which is not always the case in real life.

Before You Let the Sun In, is out May 2018, published by Sphinx, an imprint of AEON Books, priced £14.99 each. For more information see:http://www.aeonbooks.co.uk/

It was hard to believe that this imposing dyed blonde with the stunning green eyes and strong, almost manly, features could be utterly paralysed by fear, a fear without apparent cause or agent. Yet, such cases are not uncommon. The victim is overcome by a total lack of control over their rational being. Their defence systems collapse, leaving them feeling pow­erless, exposed to all the negative forces around and within them. The somatic reactions are so strong that the sufferer may feel on the point of death or as if they are about to have a massive heart attack.

Iris, however, showed none of these symptoms as she strode through the doorway into the hall. She was immacu­lately dressed in a green chiffon minidress that struck me as slightly inappropriate for a woman in her mid-forties. She was a secretary in a small electronics firm. Yet, she had the appear­ance of a hostess on an afternoon TV chat show, giving off an air of overweening confidence, which seemed very much at odds with the psychological condition she had briefly described to me on the phone.

She sat down in the armchair in front of me and crossed her legs. I noticed that her fashionable high-heeled shoes seemed painfully tight, forcing the skin of her large feet to bulge out around the edge. I couldn’t help thinking of the relief she must have felt every time she took them off.

She introduced herself and I took down some preliminary notes. She portrayed herself as being quite ordinary: husband, two children, just an average middle-class family. It was hard to believe that what she had told me on the phone had any relevance to her.

“You mentioned having panic attacks,” I said. “Would you like to describe what you experience exactly?”

As if she had received a shot of adrenalin, her back straight­ened and her face seemed to contract and her eyes narrow as if suddenly on guard against a lurking enemy. “It usually hap­pens when I’m driving to work along the motorway. I come out in a terrible sweat and my heart starts pounding and I find myself gasping for breath. I feel as if I’m going to die. It’s like a nightmare I can’t wake up from.” She began breathing fast, almost gasping for breath, merely at the thought of what she went through on a near daily basis.

“Take your time,” I said trying to get her to hold back the torrent of torment.

“Have you ever had to stop on the motorway?”

“Once I did. I sat there on the hard shoulder for I don’t know how long. I just couldn’t move. Finally, a traffic police­man stopped and told me it was illegal to stop on the motor­way and that I had to move on. Couldn’t he see that I was a total wreck? I don’t know how I managed to get back on the road. I think I drove the rest of the way at about 30 kilometres an hour with my arms clutching the steering wheel like steel clamps. I must have looked like a ninety-year-old granny out for an early morning spin.”

I explained to her that her condition was quite common and that it was usually associated with anxiety or depression. I asked if she was aware of being under any stress.

She looked at me strangely as if my question had no relevance to her. “Stress? Well, nothing out of the ordinary. My relationship with my husband has never been good. So, that’s nothing new. No, except when I have these panic attacks.”

She realised at once what I was getting at. “Well, because I don’t know when it’s going to happen, I don’t like leaving the house.”

“I watch television a lot and surf the Net.”

“Going to work must be very difficult for you?”

“I hate it, particularly driving.”

“Tell me something about yourself.”

“I want to work on my panic attacks,” she said obstinately. “I want them to stop.”

She interrupted me before I had managed to complete my sentence. “Surely there must be pills I can take?”

I was used to clients coming to me for a quick fix and although I didn’t want to disillusion them I still had to tell them the truth, that such a thing didn’t exist, at least something that would produce a lasting and healthy solution. “There are pills of course, that may help you cope but they will only anaesthetise the problem, not cure it. The aim is to tackle it at its root.” Ian Robertson is a graduate of Trinity College Dublin, where he studied French and Spanish Language and Literature, and holds an MA in Creative Writing from Lancaster University. He lives in Greece, where he works as a teacher, actor, translator and writer. He has written a number of English Language Teaching books as well as novels, short stories and poems. Recently, he co-authored Before You Let the Sun In, which was published in Greek by Nefeli Athens.

Dr Katerina Couroucli-Robertson was born in England and brought up in Greece by her English mother and Greek father. She is a psychotherapist with a PhD in Dramatherapy from Surrey University. She is also a teacher in special education, Head of Studies at the Herma Institute of Dramatherapy and Playtherapy, and an external lecturer at the University of Thessaly. She is the director of a theatre group for V.S.A. Hellas (Very Special Arts) made up of people with and without learning difficulties, and has published numerous articles on Dramatherapy as well as the book Before You Let the Sun in, written in collaboration with her husband Ian Robertson, which comprises a collection of stories based on her work as a Dramatherapist.