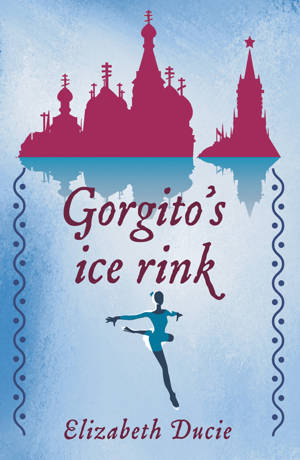 I’m very pleased to be taking part in the Book Birthday Blitz for Gorgito’s Ice Rink by Elizabeth Ducie today. I have a fabulous guest post by the author to share with you. My thanks to Rachel Gilbey from Rachel’s Random Resources for the place on the blitz.

Gorgito’s Ice Rink was runner up in Writing Magazine’s 2015 Self-Published Book of the Year Awards.

Two small boys grieving for lost sisters — torn between family and other loves. Can keeping a new promise make up for breaking an old one?

When Gorgito Tabatadze sees his sister run off with a soldier, he is bereft. When she disappears into Stalin’s Gulag system, he is devastated. He promises their mother on her death-bed he will find the missing girl and bring her home; but it is to prove an impossible quest.

Forty years later, Gorgito, now a successful businessman in post-Soviet Russia, watches another young boy lose his sister to a love stronger than family. When a talented Russian skater gets the chance to train in America, Gorgito promises her grief-stricken brother he will build an ice-rink in Nikolevsky, their home town, to bring her home again.

With the help of a British engineer, who has fled to Russia to escape her own heartache, and hindered by the local Mayor who has his own reasons for wanting the project to fail, can Gorgito overcome bureaucracy, corruption, economic melt-down and the harsh Russian climate in his quest to build the ice-rink and bring a lost sister home? And will he finally forgive himself for breaking the promise to his mother?

A story of love, loss and broken promises. Gorgito’s story, told through the eyes of the people whose lives he touched.

Until 14th October, Gorgito’s Ice Rink is only 99 p/c in all territories.

I started writing Gorgito’s Ice Rink as my NaNoWriMo (National Novel Writing Month) project in November 2007. I finally published the novel in October 2014. Why did it take so long? Well, to start with, it was my first novel. All I’d written fiction-wise before that was short stories. And I had to learn the differences between the two forms. I was used to being brief, keeping details to a minimum, and leaving the reader to fill in all the gaps. You need to do that with a 1000 word story. But with a 90,000 word novel, there’s room for expansion; for descriptions of surroundings. I had room to let my words breathe; but that took time to learn.

I actually only managed 6,000 words that first November before real life and the day job got in the way. The first four chapters. And for the next couple of years, I worked on those four chapters. I edited them; I polished them; I changed the order – several times. But I really didn’t get any further. It was time to take radical action.

In 2010, I enrolled as an MA student in Creative Writing at Exeter University; thirty years after last being on campus. My aim was to employ the discipline of the course, taught modules with assignments after each one, as a way of working my way through the rest of the first draft. If I didn’t finish it within the two years, I declared, I would accept I wasn’t going to be a novelist and stick to short stories. In fact, I didn’t quite manage it: the course finished in September 2012, by which time I had the story fully plotted out and nearly 70,000 words in the bag. And by the time of my graduation ceremony in January 2013, the first draft was done. Only the editing and publication to go

There were also a few issues I had to deal with along the way. I struggled for a long time with a fear that people would think the story autobiographical. Never mind the fact it was completely fictional, and partly set during Stalin’s time. The narrator was a British woman working in Russia; just as I had been. Poor Emma had a really boring life for a long time. I was unable to give her leeway, especially with men, in case people thought it was about me. In the end, it was my husband who said: “for goodness sake; it’s called fiction for a reason! Give the poor girl some fun!” So I relaxed and rewrote her story with a bit more spice. I also switched from first person point of view to third person, which helped create some space between me and her.

The majority of the book takes place in Russia; and most of the characters speak Russian. Of course there are lots of books set in non-English speaking communities where one just assumes everyone is speaking their own language: War and Peace for a start. But I had to deal with conversations between non-Russian speakers, like the British visitors, and locals. I added the role of an interpreter, but kept his intervention as light as possible, so as not to labour the point. And I cheated in a way with Emma, by giving her a Russian grandmother. That way her bilingual abilities didn’t seem too forced.

Finally, I was conscious I was writing about another culture. Sometimes I am horrified by the completely negative portrayal of Russia in books or films and I didn’t want to fall into the same trap. That wasn’t always easy, given the times I was writing about. I needed to strike a balance between being realistic and not being too disrespectful. I hope I’ve managed to do that satisfactorily.

Thank you, Elizabeth, for such an interesting look at your book’s journey. When Elizabeth Ducie had been working in the international pharmaceutical industry for nearly thirty years, she decided she’d like to take a break from technical writing—text books, articles and training modules—and write for fun instead. She started by writing travel pieces, but soon discovered she was happier, and more successful, writing fiction. In 2012, she gave up the day job, and started writing full-time. She has published four novels, three collections of short stories and a series of manuals on business skills for writers.