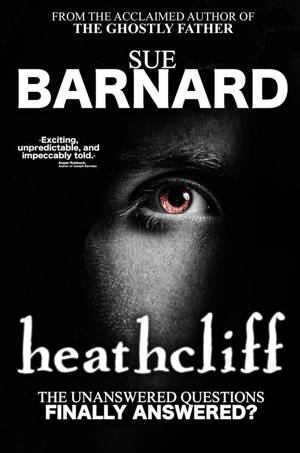 I’m delighted to welcome you today to help celebrate the book birthday of Heathcliff by Sue Barnard. I have a lovely extract to share with you from what sounds like a fascinating read. There’s also a chance to win your very own signed copy. My thanks to Rachel Gilbey from Rachel’s Random Resources for the place on the blitz.

It would degrade me to marry Heathcliff now…”

Cathy’s immortal words from Wuthering Heights change Heathcliff’s life.  At just seventeen years of age, heartbroken and penniless, he runs away to face an unknown future.

Three years later, he returns – much improved in manners, appearance and prosperity.

But what happened during those years? How could he have made his fortune, from nothing? Who might his parents have been? And what fate turned him into literature’s most famous anti-hero?

For almost two centuries, these questions have remained unanswered.

In this extract, Mistress Mary O’Keefe (the manager of The Mermaid Tavern) describes how Heathcliff first arrived in Liverpool.

Well, that was a strange evening, and no mistake.

It started out ordinarily enough – the usual crowd came in and started planning their next moves. Mr McDougal said that he’d heard news of a new convoy of ships heading for the Americas, and there were rumours that they’d be carrying cargo of French brandy, and gin and lace from the Low Countries. Rich pickings, I’d say. Not to mention the sugar. I have lots of recipes for cakes and the like; all very good for using up the stuff so that those dastardly revenue men don’t sniff it out.

Well, anyway, they were all sitting in their usual corner, drinking their tankards of ale and smoking their pipes, when the door opened and in walked a total stranger. I could tell he wasn’t from these parts, because he spoke with a strange twang in his voice. And he looked dark and swarthy, almost foreign-looking. If it wasn’t for the way he spoke, I’d swear there might even be a touch of the Irish gypsy about him.

But he was tall, quite young, and looked very strong. Mr McDougal bade him welcome, and bought him a pint of ale. He was gruff and brusque at first, but nonetheless he sat down at the table with them. I offered him a bite to eat, and he grunted his thanks. It was only a bowl of potage, the heel of a loaf and a lump of hard cheese, but he wolfed it down as though he’d not eaten for days. Well, maybe he hadn’t, for he cheered up a little once he’d got some food in his stomach.

“What kind of soup is this?” he asked, when he had finished and had wiped the bowl clean with the remains of the bread. “It is quite unlike anything I have ever tasted.”

“I call it mock turtle, sir,” I replied. “It is made to my own special secret recipe.”

He nodded appreciatively. I took away his dish and then offered him a slice of my rich plum cake, which he accepted and devoured with equal gusto. By the time he had finished he was almost smiling.

Then he asked if there was any work going. I could tell that he was down on his luck. Having once touched the depths of despair myself, I could not turn him away.

“Do you need somewhere to stay?” I asked him.

He nodded. “But I cannot afford—”

I held up my hand for silence. “You are welcome to lodge here for the moment. Whilst you search for work you can help me in the tavern, in return for your board and lodging.”

“Thank you. You are very kind.”

The other men round the table all looked at one another, then Mr McDougal spoke.

“Are you strong, young sir?” he asked.

By way of answer, the stranger rose from his chair and walked over to where I was standing. In an instant he had whisked me off my feet, picked me up as though I weighed no more than a small child, and carried me back to the table.

“Is this strong enough for you?” he asked.

The other men were all clearly impressed.

“Indeed it is!” said Mr McDougal. “Now, pray unhand Mistress O’Keefe and allow her to return to her business.”

The stranger complied, setting me down on the ground as swiftly and effortlessly as he had picked me up.

I smoothed my apron and returned, flustered, to my place behind the counter. But I could still follow their conversation.

“Where are you from, young sir?” asked Mr McDougal.

“From Yorkshire,” answered the stranger.

“And what, may I ask, brings you here to Liverpool? It is a long way from your home.”

“It is no longer my home,” the stranger answered, in a voice heavy with both anger and regret.

“Why not?” asked Mr McDougal, carefully.

“I would rather not say at this point,” the stranger replied. “But for now, suffice it to say that I have neither desire nor reason to return. I am seeking a new life, far away from the troubles I leave behind.”

I caught my breath, and the men around the table all exchanged glances. They were clearly all thinking the same as I was: what kind of life – and what kind of troubles – was this young man leaving behind?

Was he a fugitive from justice? If he was, what crime had he committed? Was there a price on his head? Was he fleeing from the hangman’s noose? If so, did he realise that by coming here, he might well be leaping from the frying pan straight into the heart of the fire?

Giveaway to Win a signed copy of Heathcliff (UK Only) Sue Barnard is a British novelist, editor and award-winning poet whose family background is far stranger than any work of fiction. She would write a book about it if she thought anybody would believe her.

Sue was born in North Wales but has spent most of her life in and around Manchester. She speaks French like a Belgian, German like a schoolgirl, and Italian and Portuguese like an Englishwoman abroad.