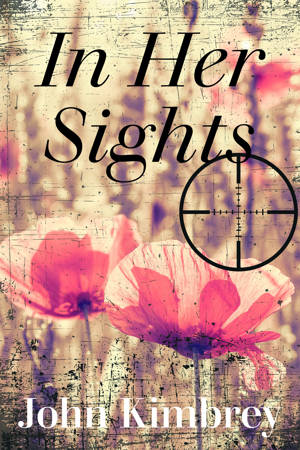 I’m delighted to be taking part in the blog tour for In Her Sights by John Kimbrey. He’s sharing the five favourite thing about his main protagonist. My thanks to Faye Rogers for the place on the tour.

Title: In Her Sights

Set at the outbreak of the Great War, the story depicts a young woman from a Gloucestershire village, tired with the constraints of her life in Edwardian Britain.

In 1916, her brother, a weak and introverted man is called up for military service. She sees an opportunity to finally compete with men in their own world and formulates a plan to go to war in his place.

In this unique and compelling tale of sibling love and extraordinary bravery, they learn to swap lives completely and she quickly adapts to her life as a man, seeking to fight alongside her male peers in war- torn France.

With many twists and turns, it demonstrates the very best and worst of soldiers of the time and brings a new perspective to the many aspects of war. With unbelievable conditions, great loyalty and unrivalled friendships, her world is then shattered as the military machine closes in. With her life now in danger, she battles to survive, bringing a conclusion the reader won’t see coming.

What are your five favourite aspects of your main protagonist?

The determination showed by the heroine, is beyond doubt the single most important part of her story. The powerful display through her early life to show her father the strengths she had, on a busy farm, were paramount, as I needed to show she was born with untold drive and it wasn’t something that developed later in her life. This was followed by her decision to go to war and fight alongside her male peers, which showed her thoroughness in planning and preparation, leading up to the day she departed. I created a series of knocks too, that would progress right through the book, in quite different forms, but she always managed to overcome any situation that was placed before her. Importantly, the reader had to know she never doubted her own abilities.

I had to create a person who from an early age, performed her daily jobs, to a high standard. This was paramount to the storyline, as she had to be perceived by the reader, to be in control of her destiny, by her own efforts. She also had to be efficient and effective in all that she did. Born and raised on a farm, she would have experienced personally, the killing of animals and would have shot birds throughout her childhood, as a matter of course. So, developing her character to be professional as a young woman, was deliberate and necessary. This, she would then take forward into the army and would ultimately produce a high standard of soldiering, right through her training and selection as a sniper. Her professionalism stayed with her throughout her time in the trenches and through the difficult times in no-mans-land. She was to be tested fully, when she awoke from her hospital bed, awaiting her destiny.

As a child, I was immensely excited the day I first went to a rifle range, as a member of the cadet force. In those days, one generally fired .22 rifles in an indoor range, but on this occasion, we were granted permission to fire 5 rounds of the Lee Enfield .303 rifle, the very rifle used by British forces throughout WW1. I watched the demonstration with eager anticipation, before finally laying down at the firing point. My eyes were wide, my heart was crashing inside my body, as I tightened my grip, waiting for almighty thump of the rifle butt into my shoulder… I remember that moment, very clearly, even today.

So, I was inspired to use this knowledge in masterminding a story that led to this experience within the manuscript. Ed’s step to become a sniper, came from a chance meeting with one of my ex-military colleagues, when we were reminiscing over a beer. Using Ed’s skills as a fine shot, it wasn’t too hard a task for her to be selected for sniper training, as some of my favourite memories as a soldier, was stalking a target in the undergrowth, of a military training area.

I wanted Ed to be seen as a loving person, full of passion for her life and for those close to her. This is demonstrated well during her lead up to joining the army, when she is trying to manage a busy farm, deal with her brother’s tantrums and prepare for the greatest challenge of her life. Her love and respect for the Rev Bryan O’Callaghan, her guardian, is clear throughout the book, and as her life progresses in the army, others come to the fore, ultimately changing her life forever.

I designed Ed’s character to be a thoughtful and resourceful person, who never failed to support her kin and closest friends. In the story, she goes through some personal losses as a teenager, which affected her greatly, but she never shows her feelings. When her life gets difficult, she focuses on the job to be done, instead of dwelling of her loss. By staying loyal to her twin brother and priest, she develops new strengths from within, taking her into an unknown future. In the military, it was inevitable her life would change significantly, and she quickly bonds with one soldier, and the loyalty between them grows at every turn, until they are protecting each other, every single day. A loyalty that becomes a hugely important part of the story and leads to something she never expected.

Thank you for that insight into Ed, John. John Kimbrey served in the Royal Marines for twenty-five years and has travelled the world extensively. He visited Antarctica three times on exploratory and scientific expeditions and was awarded the Polar medal. He lived in New Zealand for seven years, and now lives in Lincolnshire.

In Her Sights, his first novel, depicts the heroism of soldiers in the great war, demonstrates the very best and worst of soldiers of the time. It is the first book of a trilogy that focuses on this period, and, unexpectedly, its main protagonist is a woman. She thrives on many challenges the war offers her, and ultimately becomes a cool and calculated killer.

The sequel to In Her Sights is finished and John has several months of editing and fine tuning ahead of him before it is published.

John has enjoyed reading since childhood, and always felt he had a book in him, but now feels there are many more to come. His writing style is open and reactionary, and whether it’s a gift or luck, his creative mind always develops a variety of plotlines. He gets so absorbed sometimes that ideas flow quicker than he can write them down.

John loves the great outdoors and enjoys exercise. He cycles every week and makes regular visits to his local gym. He was widowed in 2014 and has two married children and three grandchildren.