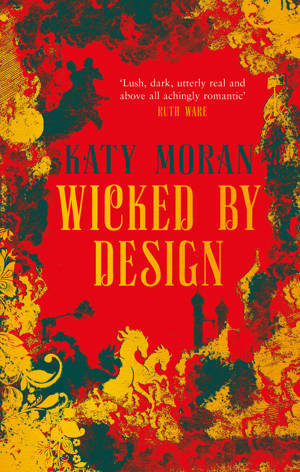 It was my stop on the blog tour for Wicked By Design by Katy Moran on 14th September but due to a mix up I wasn’t able to post that day. I’m therefore delighted to be able to share an extract with you now. My thanks to Vicky Joss from Aria for the place on the tour.

1819.
CORNWALL.
Four women sit in the candlelit drawing-room at Nansmornow, an ancient Cornish manor house. The air is thick with unspoken suspicion and secret malice. As Hester Lamorna pours tea for her three guests, she has no idea one of them is about to rock her new marriage to its very foundations.
ST PETERSBURG.
Half a world away, Hester’s impossible and charmismatic husband, Jack ‘Crow’ Crowlas, will be caught up in a chess game of sexual manipulation, played out across the sumptuous ballrooms of St Petersburg. All Hester and Crow hold most dear will be tested to the limit and beyond: their love for each other and their child, and for Crow, the loyalty of his only brother.

Shouting to those of his men still on horseback, Crow called on them all to dismount. If he could not reach the Deliverance by sea, he must reach her from Carn Du itself: there was nothing to do but to send a rope-team into the water, himself at the fore. There was just a chance that men could be pulled from the water so close to the wreck, even if the gig could never reach them without also being smashed against the rocks with those waves rising like great whales. Whisking the coiled rope from his saddlebag, Crow slung it over his shoulder and sprinted to the narrow, winding path that led away from the beach and up towards the cliff-top, along to Carn Du itself. He snatched at handfuls of broom to steady himself, careless of the needles tearing into the palms of his hands. Once he reached the cliff-top, wind tearing at his face, his hair, he saw waves and spray smashing against the cliffs, against the rocks, and the spars of the Deliverance again, still sliding beneath the waves, with now only two figures clinging to them.

‘Run!’ Crow shouted at the men behind him. ‘With me, come on!’ And where in hell’s name were Castlereagh, Mulgrave, Vansittart or any of the others? Peers of the realm still asleep in bed, leaving servants and fishermen to save lives? Reaching the outcrop of Carn Du itself, the heap of vast grey rocks rearing up against a sodden sky, Crow tore off his coat and jacket and unshouldered the rope. He lashed it around his waist with swift expertise, leaving one long end for his men to belay him with, and the rest to throw. This he coiled for now, and slung over his shoulder. Looking again, there was but a single man still clinging to the yards of the Deliverance. Squinting through spray and rain, Crow saw that the survivor was not even a man, but a boy. If he climbed down the seaward face of Carn Du as far as he could, there was a chance he could toss the rope to him, and failing that to anyone still clinging to wreckage below even as it was flung at the rocks. Amid the thundering roar of the surf and the hideous crunch of wood against rock as the top spars of the Deliverance were smashed against granite by the force of the ocean, he shouted to Hughes to take up the belaying end of the line.

‘My lord,’ Hughes said, his face rigid with emotion, rain streaming down his dark skin from grizzled, short-cropped hair, ‘if you will permit me to speak? This is suicide. The waves are too high – you’ll be washed away yourself.’

Crow turned to his assembled servants and tenants, rain-soaked, hair splattered across their faces as they passed the rope from one man to the next. ‘What then must I do? Stand here on my own land and watch people die? Just for Christ’s sake don’t let go of the line.’

He ran light-footed to the great carn; he had climbed down it many times as a boy, clinging to fissures in the rock and leaping from narrow, algae-speckled ledges into the ocean twenty feet below, and he had clouted his young brother for doing the same too, but even then there had not been waves almost as high as the rock itself. Amid the roar of water and the groan of failing timber, Crow glanced over his shoulder as he climbed and saw the boy still clinging to a spar like kelp splattered against the upright timber of a jetty. What remained of the mast leaned at a heart-stopping angle. Wave-soaked, Crow clung to the rock, the rope taut above him, digging into the spare flesh of his midriff through his wet shirt. One boy out of a crew of seventy: was that really to be all? Another wave crashed into him, and he dug the fingers of one hand into a fissure in the rock, grasping a heaven-sent handful of sprouting marram grass with the other as he yelled over his shoulder at the boy, ‘Hold on.’ Crow could see now that he was really very young, perhaps only eight or nine, his face familiar – one of the many urchins one saw on the cobbled streets of St Erth. Crow knew in the same instant that the child was losing the will to hold on, that he was too cold, and too afraid, his face white and pinched with exhaustion and terror. Katy Moran is a Carnegie nominated author, she write high-octane Regency romance, which include, muskets, gunpowder, Cornwall and Russia. She writes that when she is inspired by a new place ‘Regency England, Cornwall, Russia, the ancient palace of Fontainebleau — I want to actually be there. I want to take you there too, in the company of complex characters that you will fall a little (or a lot) in love with on the way.’