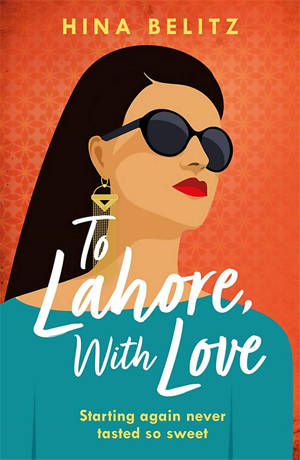 I’m delighted to be able to share an extract from To Lahore With Love by Hina Belitz with you today. This is a book that really appeals to me and I’d love to read it at some point. My thanks to Anne Cater from Random Things Tours for the place on the tour.

A truly feel-good novel to warm the heart, tickle the taste buds and take you on the journey of a lifetime Addy Mayford has always struggled with her identity. Brought up in a household of stories, food and faith by her Irish mother and Pakistani Nana, she feels constantly torn between the two sides of her upbringing. Since the death of her father, she’s found contentment cooking delicious recipes from his home city of Lahore, despite the protestations of her mother that being a chef is no career for a young woman. It’s only with the love of her gorgeous husband, Gabe, that she’s truly found happiness.

When Addy stumbles across a secret that shatters her entire world, she desperately needs to escape and is drawn to the sights of Lahore and the family she’s never known. Waiting for her there is Addy’s final acceptance of who she is, and a long-buried family secret that will change her life for ever.

There is something different, unfamiliar in the entrance hall. She breathes in slow and deep as she closes the front door behind her. The scent of earth, equal parts musk and saline, rides above the familiar notes: ribbons of air freshener, traces of an earlier meal, Gabe’s particular

smell still hanging ever-present in the air like a promise. And his scent is strong, stronger than usual. She places her shopping, the ingredients for this evening’s meal, on the kitchen worktop, ever so quietly. Christ Church clock framed in their kitchen window says it’s 6.00pm. Gabe will still be at work. She’s planned a special meal tonight, a dish to elicit amorous inclinations, this being her ovulation ‘time of the month’. One of her three fertile days for scheduled lovemaking. She dismisses her misgivings and strikes a match to light the stove. It’s a moment she loves, a rite of passage to her mysterious world of cookery. She is hypnotised by that explosive moment before the ebb and sway of flame.

She draws back. Something is still troubling her. She waves out the flame and sniffs like a tracker dog, sensing something beyond the char of snuffed match. It’s there. That spectre of human presence: warmth, moisture, the disturbance of air. She knows she’s not alone. In the hall, the line of wedding photos to her right, stairs to her left, she hears it: the creak of floorboard upstairs. A familiar sound she recognises as the spot at the end of their bed, the spot they avoid if they rise at night.

Gabe, she thinks, but it can’t be. He’s still at work. She considers. Should she call out? Something stops her. She takes one stair at a time, breaking between to gather nerve. The silence is dense and full, like a breath held in. That unfamiliar scent lingers in pockets here and there. The top step creaks.

She releases her trapped breath in a long slow stream, goes limp with relief. ‘Gabe. What are you doing home?’ she says, stepping into the bedroom.

And that’s when it hits, at once, thick as a wall.

She gags at the warm fug of cheap floral perfume and curdled sweat. Gabe’s in bed. It’s not his familiar sprawl, arms and legs akimbo, sheets in a mess. He’s propped on his elbows, rigid, limbs aligned, sheets pulled up to his neck like a child in hiding, pretending he’s not there. There’s no move to welcome her, none of his usual lifting of the sheets to invite her in.

‘Why are you home so early? . . . And in bed,’ she says, voicing thoughts more than questions. Her hand strokes her belly.

Liar! He is flushed but there’s no weight of fever on his eyes.

‘You should have phoned,’ he says. ‘Weren’t you supposed to be out tonight?’

Why would I call?

She scans the room without answering. Beside him, her pillow lies punched in an unfamiliar way. Dented, so it’s half inside itself like a cup fallen on its side. As she steps forward, the scents strengthen. Salt, damp leaves, sweat. Her neck begins to tingle. The same feeling when

her cookery is going well. The feeling that tells her that her instincts are right.

The wardrobe door is ajar, but the clothes she’d left in a spill that morning are gone. Then something catches her eye behind the frosted glass panel of the wardrobe door. A shift so slight you could persuade yourself you didn’t see it. But she is certain she did. For a moment she holds it in. The fury and shame. The humiliation and hurt. All that is about to unfold. A scene enters her head, one imagined a thousand and one times: caught redhanded. She takes a small step forward. Towards the wardrobe. And then one more. Next, three intentional strides.

She sees Gabe’s knuckles whiten as his fists tighten.

In a moment she’s there by the wardrobe, her breath jagged. His voice reaches her as if in a tunnel.

‘Shall we go downstairs?’ he says. ‘Have some tea?’

She reaches out, her hand now resting on the wardrobe door. She leaves it there. Enjoys the power.

There is a sliver of a gap. From it, the ooze of sweat. A thread of cocoa butter. She can almost feel the woman’s heart beating on the other side of the wardrobe door.

She grips the knob so hard the cold metal hurts.

She tightens her grip, her fingers white, bloodless.

Then she pushes the door closed.

He is shocked. His jaw loose, lips apart.

After a beat, she looks at him square on. HINA BELITZ is an author and renowned equal rights lawyer. Born in Pakistan to an Indian father and a mother of Iranian, Afghan and Indian descent, Belitz was brought up in Hampshire – a place starkly different to her parent’s home city of Lahore, and where she was the only Asian person in her school. Her debut novel, SET ME FREE, was critically acclaimed and led to her being interviewed by Morgan Freeman and starring in a National Geographic documentary about love. Her writing has appeared in numerous publications
including the Guardian and the BBC.

A lot of the narrative in TO LAHORE, WITH LOVE has its roots in Hina’s own life experience, she can write pieces on: Normalising Asian stories, food and identity, diversity in literature, careers and women, surviving heartbreak, fertility and growing up in the English countryside, amongst other topics.