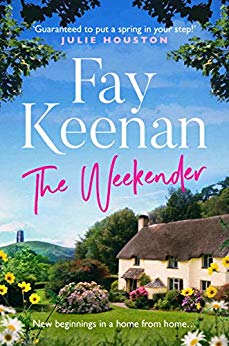 Welcome to my stop on the blog tour for The Weekender by Fay Keenan. I’m sharing an extract with you today. My thanks to Megan from Boldwood for the place on the tour.

When Charlie Thorpe met Holly Renton, they were not a match made in heaven…

Holly lives and works in the beautiful town of Willowbury in Somerset. An incorrigible optimist, she is determined to change the world for the better.

Charlie Thorpe on the other hand, is the ultimate pragmatist. As Willowbury’s new member of parliament, he has to be. While he’s determined to prove himself to the town, as far as Holly’s concerned, he’s just another politician on the make.

But when their paths cross again, it’s clear they’ve got more in common than they think. Can Holly and Charlie overcome their differences and work together, or are they destined to be forever on opposite sides? And why does Holly have a funny feeling she has met Charlie before…

Let Fay Keenan whisk you away to a world of glorious country views, unforgettable characters and once-in-a-lifetime love. Perfect for all fans of Fern Britton, Veronica Henry and Erica James.

Amazon Link to The Weekender

The voice, clear as a bell, cut over the top of the cheesy tunes of The Greatest Showman as Charlie Thorpe walked in through the open door of ComIncense. Although somewhat stung by the stridency in the speaker’s voice, he reflected, perhaps he shouldn’t have been surprised. Surveying the shop floor, he’d been assailed by hanging crystals, his nostrils filled with the scent of burning herbs, his eyes assaulted by the myriad rainbow-coloured New Age books on the shelves, and his mind overwhelmed by the shelves of apothecary jars of weird-looking dried plants, all labelled, he admitted grudgingly, with exquisitely handwritten names. He wondered how many of them were strictly legal, despite what the labels said.

‘Er, Miss Renton?’ he asked, closing the shop door behind him, which elicited an alarming jangle from the bells tied to the top of it.

The dancing figure froze with her arms above her head; slim arms, Charlie noticed, with the hint of a tattoo peeking out from one shoulder, revealed by her vest top. Charlie felt even more like an intruder on some strange planet. He’d known Willowbury was the home of all things alternative when he applied to stand as the replacement Member of Parliament, but the last time he’d been inside this shop, admittedly some years before, and long before he’d considered becoming an MP, this place had been a toyshop. He’d bought a cuddly toy dog for his newborn nephew, which the baby had promptly vomited on. The only touch of normality, to his eyes, was the sight of an adorable, curly-haired toddler sitting on the floor by the open back door, playing with a selection of exotic wooden animals.

As the dancer turned around, Charlie noticed her clear-blue eyes, the pale skin and the long, messily tied-back auburn hair, tendrils escaping to soften the high cheekbones and the slightly pointed nose. A large, generous mouth, probably captivating when it smiled fully, was curled up slightly at the edges as she looked him briefly up and down.

‘It’s Holly,’ the woman replied, seemingly not embarrassed in the slightest by the fact she’d been sprung swaying to some highly suspect soundtrack during business hours, not to mention slagging off the local MP to his face. Well, almost. Not that she knew that, of course. ‘And you are?’ She glanced down to her phone and slid the volume control down a notch or three, to a more sociable level, before putting it back on the shop counter.

‘Charlie Thorpe.’ He extended a hand and tried not to look too closely at the one she offered in return, which appeared to have traces of nicotine staining on the fingertips. ‘I’m just doing a quick tour of the local, er, businesses to introduce myself.’

‘Why? Are you the new manager of the pub?’ Holly asked, having clocked his looking-but-not-looking glance at her fingertips and the way he dropped his hand immediately after he’d shaken hers. She was surprised he didn’t wipe his hand on his jeans, he seemed so put off. She thought about explaining that she’d been hand-dyeing some fabric out the back in a strong turmeric solution but didn’t bother. He probably wouldn’t have got it anyway; from the looks of his clothes, he was more of a designer guy. The crisp white shirt, open at the neck and the dark blue, slim but not skinny jeans with a tan belt looked suspiciously expensive. As did the boots he was wearing. Somehow, she doubted that they were vegan leather…

‘Not exactly,’ Charlie smiled what he hoped was a winning smile. ‘I’m the new Member of Parliament for the area.’

Charlie felt a stab of satisfaction as Holly’s cheeks flushed slightly, clashing with her hair. Clearly she hadn’t expected to be overheard in her vocal criticisms of him and his new job.

‘So, you’re the one taking over from Fingers-in-the-till Fitzgerald, are you? Good luck with that.’

‘Thanks,’ Charlie said gruffly. He wondered if he should leap to the defence of his predecessor but conceded that actually Holly was probably right about the fiddling, and not just with cash, but also with interns, if local gossip was to be believed, so he decided not to. ‘It’s going to take a while to get my bearings, so I wanted to come and say hello while Parliament’s in recess for the Easter holiday. Since I’m new to the area, I want to make the most of the time to settle in.’ Among his plans was a visit to every local business in his constituency, which included several cider farms, as well as quite a few smaller concerns like Holly’s shop. While he was looking forward to sampling some of the produce at the cider farm if he got the chance, he wasn’t entirely sure if anything from ComIncense really took his fancy.

‘Oh, I see,’ said Holly. ‘Doing the rounds, checking out your patch, then?’

‘So how long have you had the shop?’ Charlie asked, ignoring the veiled jibe. Press the flesh, Charlie… form a rapport with everyone you can. You never know when you might need their support.

‘About four years,’ Holly replied. ‘I was left some money by my grandfather, and after wondering what on earth to do with it other than blowing it on fast cars and drugs, I decided to invest in this place.’ She grinned. ‘I’m joking about the drugs, by the way.’

Charlie found himself smiling back, and trying not to glance again at the weird dried herbs and plants that had caught his attention as he’d walked in. ‘I’m glad to hear it.’ He glanced around the shop. ‘So, what are your, er, best-selling items?’

‘Oh, you know,’ Holly replied. ‘Everyone who moves house wants a stash of white sage to burn to chase away the bad vibes, and I get a lot of tourists in who love the fact we’re in the shadow of Willowbury Hill here, which, I’m sure you know, is a hugely important spiritual and archaeological site.’ She pulled an odd-looking doll off the shelf behind her. ‘And people fed up with their jobs tend to like these.’ She pressed it into his hands.

Charlie looked alarmed, until he took a closer look and found it was a jokey representation of a voodoo doll, split into sections marked with things like ‘talked over me at the meeting’, ‘stole my ideas’ and ‘denied me a pay rise’. He laughed gamely. ‘I can see why they’re popular. Perhaps I’ll buy a few to take back to the House!’ Fay Keenan is the author of the bestselling Little Somerby series of novels. She has led writing workshops with Bristol University and has been a visiting speaker in schools.  She is a full-time teacher and lives in Somerset. Fay’s new series for Boldwood will begin with The Weekender in November 2019.