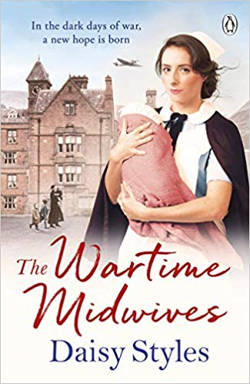 Well, if ever a book was up my street this is it, and unfortunately there wasn’t time for me to fit in a read of it 🙁 . I do have an extract to share with you today though. My thanks to Sriya Varadharajan from Penguin for the place on the tour.

On a blustery May morning, with the wind rattling the windows of the nurses’ boarding house of Mary Vale Hall, Ada Dale struggled as always to confine her long golden- auburn curls under her starched white cap. Knowing she’d get a ticking off from Matron if she didn’t present herself without a hair out of place, she stopped in the hall to check her appearance in an unsatisfactory small mirror. Throwing her navy- blue cape around her shoulders, Ada hurried along the long, echoing corridor that connected Mary Vale Mother and Baby Home to the convent of the Sisters of the Holy Mother, where she boarded in the wing specifically set aside for staff accommodation. Passing the beautiful golden-and-blue statue of Our Lady of the Sea, Ada automatically crossed herself. Though brought up a Protestant in her home town of Sheffield, Ada had grown to respect the customs and practices of the Catholic Church during her stay at Mary Vale; if you spent as much time with nuns as Ada did, one inevitably picked up certain customs, and this was just one of them.

Ada checked her fob watch and saw that she had a few minutes to spare, and, having always been drawn to the outdoors, she pushed open the heavy front door and walked out into the large garden that wrapped itself around the big old, multi- gabled, red brick house. Mary Vale had originally been built by the parish as a place for the destitute and insane but was now used as a refuge for unmarried pregnant women and their babies.

Standing in the garden, Ada’s roving gaze landed on Mary Vale’s attic windows; she always spared a thought for the poor, sad souls who’d been confined to those high, dark rooms so long ago – locked away after conceiving a child out of wedlock. She’d read in Mary Vale’s old records of rejected spouses, women who’d been committed to the asylum, condemned on some trumped- up charge to a brutal and unjust internment so that their husbands could claim their inheritance. Thinking of the women presently occupying the Home, Ada was sure that Mary Vale was a far happier place these days.

‘Though,’ she thought as she breathed in and filled her lungs with fresh air, ‘the place regularly echoes with the cries of heartbroken mothers unable to keep their babies.’

Ada again checked the time and quickly followed the garden path that led across a railway track and on to the beach. Standing buffeted by the stiff spring breeze, she admired the breath-taking, sweeping view of Morecambe Bay before her, while behind her ranged the soft, swelling hills that steadily rose to meet the lower fells of the Lake District. Ada marvelled that the view was never the same, though the landscape remained constant: the ever-changing light and shifting tides coloured it differently every day. On one such as this, a passionate fell-walker like Ada itched to stride out and ascend to the mountaintops.

‘Wait until you’re next off-duty,’ she firmly told herself. Clutching on to her nurse’s cap, which was in serious danger of being blown into the Irish Sea, she retraced her steps into Mary Vale. Daisy Styles grew up in Lancashire surrounded by a family and community of strong women whose tales she loved to listen to. It was from these women, particularly her vibrant mother and Irish grandmother, that Daisy learned the art of storytelling. There was also the landscape of her childhood – wide, sweeping, empty moors and hills that ran as far as the eye could see – which was a perfect backdrop for a saga, a space big enough and wild enough to stage a drama, one about women’s lives during the Second World War.