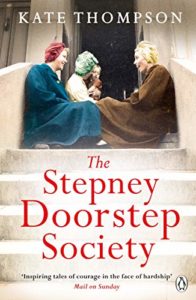 I have a great extract to share with you today from The Stepney Doorstep Society by Kate Thompson. This is a book I already have on my TBR pile and I think it sounds fabulous. I hope you enjoy the extract. My thanks to Sriya Varadharajan from Penguin for asking me to be a part of the blog tour.

The unsung and remarkable stories of the women who held London’s East End together during not one, but two world wars.

While the men were at war, these women ruled the streets of the East End. Brought up with firm hand in the steaming slums and teeming tenements, they struggled against poverty to survive, and fought for their community in our country’s darkest hours.

‘Crash, bang, wallop! Let’s be having yer!’ boomed the compère as he beckoned Minksy up on to the makeshift stage. The bouncy blonde bombshell was just sixteen, but there was no trace of nerves as she patted her platinum waves and swanked her way into the spotlight. A hush fell over the occupants of Bethnal Green Underground Station as she parted her cherry- painted lips:

I had a little back room to let, the rent was half a crown, A smart young lodger took the room, in the name of Brown . . .

Minksy belted out the tune with all her heart. Who needed a microphone? The acoustics of the curved platform roof carried her song the length and breadth of the station. Reaching her favourite part, she gave a coquettish grin and lifted the hem of her dress teasingly:

I tiddly highty, tickle me under the nightie . . .

A gale of laughter echoed up the tunnels as the crowd joined in with the chorus, even starting up an impromptu conga line, which snaked up the station platform.

‘There’s only one winner –  Minksy Agombar!’ announced the compère, handing round a cap into which the grateful shelterers tipped their coinage.

‘You’re a caution, Minksy,’ hooted a woman in the crowd, dabbing the corner of her eye with her hankie. ‘I forgot myself for a minute there.’

Thanks to Minksy, the drudgery and fear of war had been suspended, if only for the duration of a song. Her win also meant there’d be grub tonight. Counting up her winnings, Minksy dashed excitedly through the heavy steel door and pelted up the stairs of the Tube and over the road, to where her mum Hetty, dad Bill, three sisters and brother were sheltering in the railway arches behind the Salmon & Ball pub. Here, it was even more crowded and her breath hung like steam in the damp, coal- scented night.

Bill Agombar turned, his craggy face lighting up on seeing his eldest daughter.

‘Fancy that!’ he grinned, holding up seven fingers to Jack the Potato. ‘I taught you well, my girl.’

Soon, Minksy and her younger sisters, Marie, Jeannie and Patsy, and brother, Billy, were tucking into a handsome tea of piping- hot jacket potatoes, split down the middle and doused with vinegar, salt and pepper. As she licked the salt from her fingers, Minksy gazed affectionately at her father.

She knew he could be a right old rogue when the fancy took him, spending most of his earnings down the pub and making life a struggle for her mother, but when it came to his talent, she was a chip off the old block. Kate Thompson was born in London in 1974, and worked as a journalist for twenty years on women’s magazines and national newspapers. She now lives in Sunbury with her husband, two young sons and a soppy Jack Russell called Twinkle. After ghost writing five memoirs, Kate moved into fiction. Kate’s fourth book, The Allotment Girls was out March 2018 and her first non-fiction, The Stepney Doorstep Society is out in paperback right now.