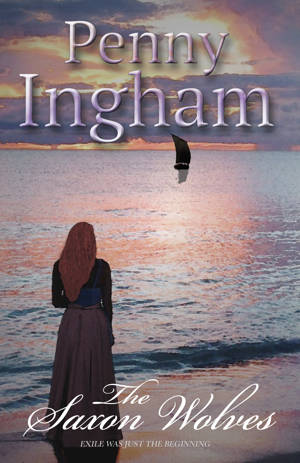 I’m so pleased to be sharing an extract from The Saxon Wolves by Penny Ingham with you today as part of the blog tour. My thanks to Rachel Gilbey from Rachel’s Random Resources for the place on the tour.

Britain 455AD. The Roman Empire has fallen. As the daughter of a king and a priestess of the sacred grove, Anya’s life in Germania is one of wealth and privilege – until she dares to speak out against the high priest’s barbaric human sacrifices. Her punishment is exile. Forced to leave her homeland, she sails to Britannia, to an island that is sliding into chaos and war, as rival kingdoms vie for power. Alone and far from home, Anya must learn to survive amidst the bloodshed, treachery and intrigue of fifth century Britain. Can she find a place to belong – a home, a hearth, a welcome?

Britain 455AD. The Roman Empire has fallen. As the daughter of a king and a priestess of the sacred grove, Anya’s life in Germania is one of wealth and privilege – until she dares to speak out against the high priest’s barbaric human sacrifices. Her punishment is exile. She sails to Britannia with her brothers Hengist and Horsa, who are to act as mercenaries for the British warlord Vortigern…

She awoke to the sound of Cato shouting. She stood up unsteadily and shivered. The sun had been shining when she had fallen asleep, but a blanket of flat, grey cloud now covered the sky. The sea looked cold, grey and ominous without the sun upon it. The wind had picked up and there were black clouds on the horizon. They seemed to be erupting from the sea itself like a monstrous birth and as she watched, they grew taller and fatter, as if nurtured by the wind. Her eyes were watering now and her face felt numb. She tried in vain to hold her long hair in check, but it lashed wildly against her cheeks. A fierce gust knocked her back a step, and she stumbled into Hengist.

‘Watch where you’re going!’ he snapped.

‘Prepare to come about!’ Cato shouted. ‘Move yourself, my princess unless you want to lose your pretty head.’

Hengist manhandled her towards the stern. His soldiers moved aside to let them pass. They had been full of banter not an hour since but were quieter, more wary now. The ship crested another swell. It heaved then sank heavily into the trough. Anya slid awkwardly across the wet keel and Hengist caught her before she fell.

‘Sit down, before you fall down,’ he said roughly then looked up at the sky. ‘This is going to get a lot worse.’

‘Too close to the wind!’ Cato shouted.

Anya followed Hengist’s gaze. The black clouds were no longer on the horizon. They were just off the bow, and racing towards them as if propelled by the gods themselves. The sea had come to life, rough and choppy as if a giant ladle was stirring it from on high. A wave crashed over the bow and surged the length of the ship. It swirled and sloshed around her boots, frothing and foaming like a weir after rain. The ship rolled and listed, and her stomach heaved again.

‘We should try to outrun it. See if we can find calmer waters!’ Cato Junior shouted above the roar of the wind.

‘We’ll do no such thing!’ Cato yelled. Tiny droplets of salty water clung like snowflakes to his straggly beard and bristling nose hair. ‘If we run with this wind we’ll be back on the shores of Gaul before you can say ‘coward’. I want his purse of gold, not a flogging until I bleed.’

‘Are you mad? All it takes is one breaker and we’d pitch-poll like a dolphin. Don’t argue with me, boy. We will beat to the wind.’

‘I am,’ Anya thought, ‘I’m very afraid.’ She looked at Cato Junior, and she realised that he was too. Cato had called this gale ‘a storm’, and she had heard terrible tales of whole fleets of ships lost at sea to unforgiving storms.

The ship lifted and slewed with such force that she fell to her hands and knees. She tried to stand up but the boat pitched again, and she slid further towards the stern, choking as the salt water surged down her throat. For a brief moment, the wind calmed, but it was merely a prelude to the rain. It arrived suddenly and violently, huge droplets that pierced the waves like arrows. The rain turned to hail; huge, hard balls of ice that battered the ship’s wet planks and stung her cheeks.

Thunder cracked, lightning flashed and the sea lit up, silhouetting the seething clouds, foaming silver against the black sky. Tor, the warrior-god of the storm, was riding his chariot across the heavens and she stared in awe. She had never seen anything quite so beautiful and terrifying in equal measure.

The soldiers were crouching at mid-ship now, hail bouncing fiercely from the shields they held above their heads. Cato and his son were struggling to reef the sail, their shouts carried away by the howling wind. Another wave hit the ship, and its timbers creaked and groaned. Water surged the length of the keel, stirring up the hail stones. It surged over the cross timber, lashing Anya’s face with icy water. Her eyes stung and her throat burned from the bitter salt.

She gripped the side of the ship and hauled herself upright. She had not understood much of Cato and his son’s argument, but she knew they were not running away from the storm. They were facing it head on, tacking a torturous and painfully slow route through the heaving sea. And the storm was fighting back with all its raw, angry power.

She felt her stomach heave again, and she turned just in time to vomit over the side. Her fingers gripped the shiny wet planks, and she stared blankly at the foaming, churning sea as it swirled and boiled beneath her. There was no sign of the other ships, and her heart lurched as violently as the waves.

Where was Horsa? Was he safe? Penny’s father, a journalist, instilled her with a love of history from an early age. Family holidays invariably included an invigorating walk up an Iron Age hill-fort whilst listening to his stirring stories of the Roman attack and the valiant defence by the Britons. Consequently, Penny has a degree in Classics and a passion for history and archaeology. She has enjoyed a varied career, including BBC production assistant, theatre PR and journalism, but her ambition was always to write historical fiction. Her first novel, The King’s Daughter, was awarded Editor’s Choice by the Historical Novel Society. Penny has worked on many archaeological excavations, and these ‘digs’ and their evocative finds often provide the inspiration for her books. Penny’s research also takes her to the many spectacular historical sites featured in this novel, including Hadrian’s Wall and Tintagel.”