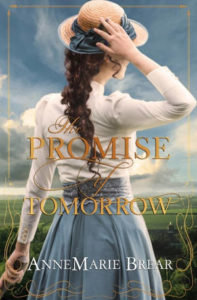 I’m delighted to have an extract to share with you today from The Promise of Tomorrow by AnneMarie Brear as part of the blog tour. My thanks to Amy Bruno from Historical Fiction Virtual Book Tours for the place on the tour.

Perfect for the fans of Dilly Court and Rosie Goodwin.
Charlotte Brookes flees her lecherous guardian, McBride, taking her younger sister with her. After a year on the road, they stumble into a Yorkshire village where the Wheelers, owners of the village shop, take them in. This new life is strange for Charlotte, but preferable to living with McBride or surviving on the roads.
Harry Belmont is an important man in the village, but he’s missing something in his life. His budding friendship with Charlotte gives him hope she will feel more for him one day, and he will marry the woman he yearns for.
When McBride discovers where Charlotte lives, his threats begin. Harry fights to keep Charlotte safe, but World War I erupts and Harry enlists.
Left to face a world of new responsibilities, and Harry’s difficult sister, Charlotte must run the gauntlet of family disputes, McBride’s constant harassment, and the possibility of the man she loves being killed.
Can Charlotte find the happiness that always seems under threat, and will Harry return home to her?

Charlotte hurried along the bustling streets of York, not wanting to get too wet from the slight drizzle of rain falling. The majority of the winter snow had thawed, only remaining high on the hilltops, and there had been a few bright days of early spring, but the weather today was dull and grey. However, it didn’t deter her when Stan had offered to take her shopping in York for a present for Hannah’s birthday.

They had planned a small tea party tomorrow for Hannah after she came home from school, and invited a few of her new friends as well. Charlotte hoped that the weather would turn and the sun would shine.

She paused in front of a toy-shop window and looked at the goods on display. Wooden hoops, spinning tops, dolls and games, so many things that she knew Hannah would adore. Going inside, Charlotte took her time to view everything on the shelves. With her limited money, saved from her wages she received from working for Bessie and Stan, she had enough to buy a few small gifts. Besides, she felt guilty that Hannah was forced to leave behind all her possessions when they fled from McBride.

After fifteen minutes of making choices, she settled on a yellow paper kite, a book, Alice’s Adventures in Wonderland and a small stuffed rabbit wearing a red bow. Next, she stopped at a sweet shop and bought four small bags of sugared almonds, something they didn’t sell in Wheeler’s shop.

With her money spent and arms full, Charlotte, thirsty and late to meet Stan, hurried along Market Street towards the tea shop where they had arranged to meet after her shopping and his business was completed.

Side-stepping an elegant tall woman instructing her driver to load her parcels into her sleek automobile, Charlotte wasn’t really watching where she was going and suddenly she collided with a man emerging from an alley.

‘I’m so sorry.’ Juggling her packages, Charlotte shot an apologetic glance at the stranger then froze on recognition. Neil Featherstone. Her heart flipped and she instantly stared around looking for McBride, for the two men were thick as thieves and just as dangerous as she knew to her cost.

Shaking, Charlotte tried not to show her fear. ‘Leave me alone!’ She barged past him, but he grabbed her elbow and pulled her closer to his side.

‘Not so fast, little chicken. We have much to discuss.’

‘Let me go.’ Her heart felt like it would clearly jump from her chest as she looked into Featherstone’s granite grey eyes.

‘You’re coming with me. McBride is only a few streets away, and he’s going to be beside himself to have you back.’ AnneMarie has been a life-long reader and started writing in 1997 when her children were small. She has a love of history, of grand old English houses and a fascination of what might have happened beyond their walls. Her interests include reading, genealogy, watching movies, spending time with family and eating chocolate – not always in that order!

AnneMarie grew up in Australia but now lives in the UK.
For more information please visit AnneMarie Brear’s website. You can also connect with her on Facebook, Twitter, Google+, and Goodreads.