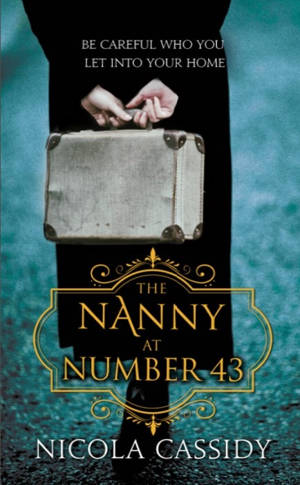 I’m so pleased to be able to share an extract from The Nanny at Number 43 by Nicola Cassidy today as part of the blog tour. I love the sound of this book and really wish I could have fitted in a read of it. My thanks to Anne Cater from Random Things Tours for the place on the tour.

Wanted, a respectable woman to care for a motherless child.

When William D. Thomas’s wife dies in childbirth, he places an advertisement in his local newspaper seeking a nanny for his newborn child.

He is thankful when an experienced nanny arrives at 43 Laurence Street and takes over from his frazzled housekeeper Mrs McHugh.

Mrs McHugh confides in her bedridden friend Betty, who has a bird’s-eye view of all the happenings on Laurence Street, that the Nanny is not all she seems. Betty begins her own investigation into the mysterious woman.

When the bodies of twin babies are discovered buried in a back garden, by a family who have moved from their tenement home into a country cottage, a police investigation begins.

But it is Betty who holds the key to discovering who the Nanny really is … and the reason she came to 43 Laurence Street.

“Miss Murphy,” she said. “Margaret Murphy. Well, I’m from Dublin. The south side. Rathmines. I worked as a governess for the past three years. They’re gone to boarding school now. Lovely girls. I was sad to leave. Before that I was with another family in Dublin. And before that I worked in Wicklow.”

“And babies?” said Mr. Thomas, “What experience do you have with babies?”

“Oh, I adore babies,” she said. “My family in Wicklow had a wee one who I was very attached to. The baby is three weeks old, sir?”

He paused. “Not very well, to be honest,” he said. “She is crying. Hunger, I think. Mrs. McHugh tries her best, but she cries day and night.”

“Ah,” she said. “That can happen with the bottle, you know.”

“I have a lot of experience with bottle-feeding. My family in Wicklow decided on the same thing, not to go with a wet nurse, so I am well used to making up bottles. It causes extra wind in the child, you see, so you need to give gripe water, something to ease the poor little mite. Yes, I have plenty of experience with that.”

He looked relieved. “Well, that’s good then. And references, have you brought any?”

She picked up her case and put it on the couch, clicking open the locks. She sifted through the papers inside and produced her references, one stamped with a wax seal.

She rose and handed them to him.

“Yes,” he said quietly to himself as he studied them. “Very good.”

From upstairs the muffled cries of the baby could be heard.

He opened the door, allowing her to pass first, then he climbed the stairwell, holding on to the banister, his footsteps heavy. The cries grew louder as they climbed. He took her to the second floor and into the child’s bedroom. Balled-up sheets were strewn about. A dressing table was covered in glass bottles, some empty, some half full. Powdered milk was scattered in spilled piles, large rubber teats sitting among the mess.

A low wooden cradle was centred on the floor. Behind it stood Mrs. McHugh, her hair sticking out in wisps around her face. She clutched the wailing baby to her, shushing her, trying to rock the cries from her.

“Let me try,” the woman said, walking across the room, peeling the gloves from her hands.

She took the crying infant and the blanket from Mrs. McHugh. The baby was red in the face and was shuddering. She wrapped the blanket tightly around the child, swaddling her, and held her close to her chest.

She held her hand out for the bottle.

Mrs. McHugh looked at Mr. Thomas and said, “I’ll get one.”

The woman squeezed the baby tight, pushing her into her breast, humming a low sound.

“Sometimes she takes the milk, sometimes she doesn’t,” said Mr. Thomas, his hand gesturing to the table of baby food.

“I find sugar helps,” she said. “But the milk must be kept warm, don’t allow it to go cold.”

Wrapped tight, the baby began to calm a bit, her heavy cries becoming light, peppered with hiccups now. Mrs. McHugh returned with a jug of hot water. The woman held the baby as the bottle warmed in the jug, then tested the milk on the inside of her wrist before using her fingers to rub the milk along the child’s gums and lips.

The baby thrust its mouth open and took the rubber teat offered. She drank, her jaws working as she suckled the milk hungrily.

Mr. Thomas and Mrs. McHugh stood and watched the woman sit down in the rocking chair in the corner. She fed the baby, while rocking gently back and forth. When the child had finished half the bottle, she placed her along her arm as though she were petting a cat and patted her back.

She winded the baby, fed her the rest of the bottle and winded her once more. Full of milk, the child’s eyes fell backwards a little. She lifted her and placed her in the crib, covering her with a white crocheted blanket. The baby turned her head and went to sleep, her tiny chest rising up and down with her breaths.

Silently, the three left the bedroom and stood on the landing.

“I would like to have a word with Mrs. McHugh,” Mr. Thomas said. “Could I trouble you to wait in the sitting room, Miss Murphy?”

“Of course,” she said, and walked down the stairs, a smile, unseen, planted on her lips.

She waited, sitting, satisfied, her hands curled in her lap.

Things had gone well. The baby had cooperated. She knew she would be taken on now.

The door opened and Mr. Thomas appeared, his face less strained than when he had first presented himself.

He smiled and held out his arms in a welcoming gesture.

“When would you be in a position to start?” Nicola Cassidy is a writer and blogger from Co. Louth, Ireland.

She started her writing career early, entering short story competitions as a child and became an avid reader.

Encouraged by her English teachers, she chose to study journalism at Dublin City University and while working in political PR and marketing, studied a series of advanced creative writing courses at the Irish Writers’ Centre.

Later she set up a lifestyle and literary blog http://www.ladynicci.com/, which was shortlisted in the Ireland Blog Awards in 2015 and 2016 and finalist in 2017 and 2018.

She signed with Trace Literary Agency in 2016.

December Girl is Nicola’s debut historical fiction novel and is set in the mystical and ancient Boyne Valley, Co. Meath, famed for its stone age passage tombs. Elements of the story are inspired by true events.

Her second novel The Nanny at Number 43 is published by Poolbeg Press.

She lives with her husband and two young daughters in Termonfeckin, Co. Louth.