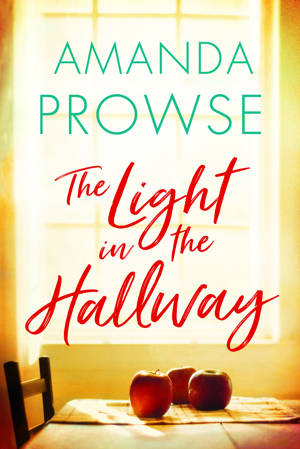 I’m absolutely delighted to be able to share an extract from The Light in the Hallway by Amanda Prowse with you today. I’m reading this wonderful book at the moment so look out for my review coming very soon. My thanks to Megan Denholm from ed pr for asking me to be a part of the tour and for sending me a review copy of the book.

From the bestselling author of The Girl in the Corner comes the moving story of a man whose life is changed in an instant. How do you start again when you lose the only love you’ve ever known?

When Nick’s wife Kerry falls ill and dies, he realises for the first time how fragile his happiness has always been, and how much he’s been taking his good life and wonderful family for granted. Now, he suddenly finds himself navigating parenthood alone, unsure how to deal with his own grief, let alone that of his teenage son, Olly.

In the depths of his heartbreak, Nick must find a way to navigate life that pleases his son, his in-laws, his family and his friends—while honouring what Kerry meant to them all. But when it comes to his own emotions, Nick doesn’t know where to begin. Kerry was his childhood sweetheart—but was she really the only one who could ever make him happy?

And in the aftermath of tragedy, can Nick and his son find themselves again?

Nick took a deep breath and tried to recall the words Peter, the counsellor, had said during their last chat.

‘Try to remember that there is no right or wrong way to behave . . . Don’t force or coerce, because that’s the road to conflict and neither of you need that on top of everything else . . . Remember that she is not only your wife, she’s Olly’s mum too. Tread gently. Leave doors open, encourage, listen and try to understand that this is everyone’s personal journey and everyone takes a different route. Be ready to prop him up when he most needs it, and if it’s at a time when you most need propping up, that’s when it can seem hardest . . .’

‘Okay.’ He nodded, tapping his wedding ring on the door frame. ‘Okay, son. But if you change your mind, I’ll be leaving in a few minutes.’

‘I won’t change my mind.’ Oliver worked his fingers on the keys at double speed and bit his bottom lip.

Nick left the bedroom door ajar and, having neglected to do so that morning in a mad rush to leave the house, he cleaned his teeth quickly in the sparse green-tiled bathroom at the top of the stairs. He popped his blue toothbrush in the pot next to his wife’s lilac one and splashed his face with cold water, patting it dry on the hand towel that felt a little stiff to the touch and had a vague smell of mould about it. Laundry, yet another task, an aspect of ordinary life that had fallen by the wayside in the shadow of the tidal wave from which he was running. Although with his energy levels sapped, it would be fair to say it was now more of a crawl than a run. He balled the towel and threw it into the plastic laundry basket which lived in the corner by the sink.

He took his time, though aware of the urgency, opening the kitchen window, inviting a breeze into the stuffy room where the sun beat against the misty window for the best part of the day. He put the milk back in the fridge and located his car keys, giving the boy a chance to change his mind.

He carried a weird sensation, empty with a hollow thump to his gut, which felt a lot like hunger, and yet he was simultaneously wired, full, as if on high alert.

With one last opportunity looming, his eye on the clock and his heart racing, he ran back up the stairs and walked purposefully into Oliver’s room. His son had slipped down on the pillows and pulled the duvet cover up to his chin. The sight of him curled up like this reminded Nick so much of when his boy was five, six, seven – hiding from the monsters that might lurk under the bed – and his heart tore a little. The actual quilt had been discarded in a heap on the bedroom floor – no need of the fibre-filled warmth on this balmy summer evening – and yet he felt an unwelcome chill to his limbs.

‘The Light in the Hallway’ by Amanda Prowse is out now, published by Lake Union, priced £8.99 in paperback original. Amanda Prowse is a prolific, international bestselling author whose first novel was published in 2014. In just a few years she has written in excess of 20 books and garnered a loyal and devoted readership.

Amanda has lived a remarkable life with many of her books inspired by her own life experiences. Her features have appeared in media from the Daily Mail to the Guardian. She is also a great speaker and her TV appearances include Lorraine, This Morning and The Wright Stuff.