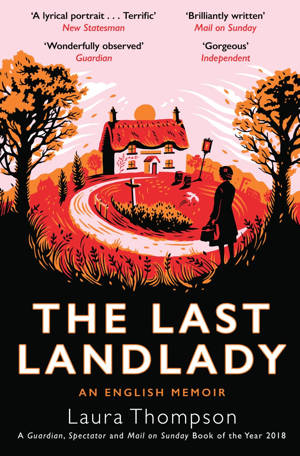 Welcome to my stop on the blog tour for The Last Landlady by Laura Thompson. What a gorgeous cover this book has! I have the pleasure of sharing an extract with you today and would like to thank Anne Cater from Random Things Tours for the place on the tour. Laura Thompson’s grandmother Violet was one of the great landladies. Born in a London pub, she became the first woman to be given a publican’s licence in her own name and, just as pubs defined her life, she seemed in many ways to embody their essence.

Laura spent part of her childhood in Violet’s Home Counties establishment, mesmerised by her gift for cultivating the mix of cosiness and glamour that defined the pub’s atmosphere, making it a unique reflection of the national character. Her memories of this time are just as intoxicating: beer and ash on the carpets in the morning, the deepening rhythms of mirth at night, the magical brightness of glass behind the bar…

Through them Laura traces the story of the English pub, asking why it has occupied such a treasured position in our culture. But even Violet, as she grew older, recognised that places like hers were a dying breed, and Laura also considers the precarious future they face.

When I think of my grandmother, it is thus: seated on a high stool, her stool, in the negligent but alert position of a nightclub singer.

Behind her, a cool brick wall, whose edges made little snags in the satin shirts that she wore loose over trousers. One of her hands rested on her thigh, not quite relaxed, holding a glass.

Her hair was white but not a grandmotherly white. She went regularly to the salon on the top floor at Harrods, a fairyland pink parlour in those days, its air dense and shimmering with little starbursts of Elnett. She would come home with tales of her hairdresser’s love life (somewhat pitiable) and green and gold bags full of Estée Lauder cosmetics.

From middle age onwards she disdained most products that were not by Estée Lauder, and there  was never any arguing with her. The collars of her shirts were impregnated with Alliage scent, and the Re-Nutriv cold cream on her dressing table bore the marks of her fingers dragged across its surface, like little furrows in snow. She wore dark foundation and a deep red lipstick. Even now I feel that I am letting her down if I do not paint my lips.

So here she is: a casual empress on her stool, a woman in late middle age with a brightness, an intensity of being, that still flares in my head.

Mysteriously moving, to feel memory shaping her as I write . . . which reminds me quite suddenly of a camera that she owned, a huge thing with a blue flashlight on top. After the blinding click the photo would ooze slowly out of the camera, a hot square with a white frame around indeterminate dark blobs. My grandmother would clamp it beneath her arm, waiting for it to develop against the warmth of her body. If it didn’t flatter her, she would simply throw it away, ripped quickly in two, before anybody else could see it.

Because of her instant culls, many snapped moments are lost, which I suppose is a pity, but I rather like it that way.

Photos are finite and unarguable. I prefer the images that are stored in the mind, the precious surprises that they spring (which of course you are springing upon yourself), their magical areas of occlusion and sharpness.

Quite unexpectedly I can see, for instance, the slightly pigeon-toed angle of my grandmother’s feet, looking older than the rest of her, placed upon the bar of her stool. I can see how she was framed, by the open wooden door to her left, and the counter on which she would lean her right forearm. I can see the texture of the counter, although I have no idea what it was made of (I might know now; these are childhood memories). It was shiny, orange-coppery in colour, hammered with tiny dents, wet where one least expected it to be. And it was covered with the evening’s ecstatic confusion: beer mats, glasses, a sturdy blue- green ice bucket, a couple of siphons, the large square ashtray into which my grandmother stubbed her Player’s untipped.

Her glass, which was her own thick tumbler, contained whisky and soda.

She loved alcohol with a respectful, tender passion, and nursed the glass rather as she did  her little  dogs (she owned chihuahuas, years before they became fashionable), although she drank from it only occasionally.

Just a deep sip, now and again, to maintain her dégagée buoyancy. She had learned to phrase her personality, as a singer phrases a lyric; she knew the power of withholding, and of brief conspiratorial bursts of charm.

People bought her drinks all the time, seeking to please, and she usually accepted them. She would raise her glass in thanks (‘Cheers, darling!’), put it to her mouth, and then throw   the contents on the floor.

A strip of carpet beside her stool was permanently damp with whisky. Although she did her drink-chucking surreptitiously, as she believed, everybody knew that she did it.

It was part of her legend, like her stage whispers and her London childhood. Laura Thompson won the Somerset Maugham award with her first book, The Dogs, and wrote two books about horse racing while living in Newmarket. Her biographical study of Nancy Mitford, Life in a Cold Climate, appeared in 2003 (re-issued 2015) and was followed by a major biography of Agatha Christie. A Different Class of Murder: The Story of Lord Lucan was published in 2014, and 2015’s Take Six Girls: The Lives of the Mitford Sisters was recently sold to television. She lives in Richmond.