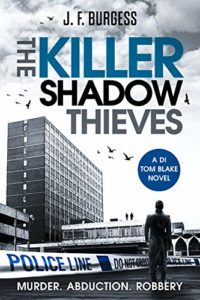 Welcome to my stop on the blog tour for The Killer Shadow Thieves by J.F. Burgess. I have an extract to share with you today. My thanks to Kelly Lacey from Love Books Group Tours for the place on the tour.

Widowed detective DI Tom Blake sets off a chain of events that change his life forever, when the brutal murder of an alcoholic skinhead, and arrest of a vicious Turkish loan shark, unwittingly disrupts an international gang’s daring plans to steal the world-famous Staffordshire Hoard.

In a cruel twist of fate, Blake’s daughter is kidnapped and the trail propels the bereft detective on a personal quest to Miami to save her life. Operating outside the law, he enters into an illicit showdown with a mysterious artefacts Collector, almost costing him his life.

As the body count rises, Blake and his team struggle to unravel the conspiracy of a shadowy killer who leaves no trace. With only circumstantial evidence against each of the suspects, they hit a wall, until twenty-six-year-old photographs linking them to the murdered skinhead emerge. It seems the victim’s depraved past is the key to identifying the killer.

Can the police uncover the truth through all the lies and deception, and crack the case before someone else gets killed? And will they recover a legendary national treasure, worth millions, before it’s lost forever? Detective Inspector Tom Blake sat drumming his fingers on the wheel of the white Astra pool car parked on Victoria Road, a main artery that fed the city of Stoke-on-Trent. His stomach rumbled in expectation of the return of his partner DS John Murphy with breakfast: hot bacon and cheese oatcakes, a Staffordshire delicacy, enjoyed all over the county.

He turned down Radio Stoke, but Sam Cooke’s soulful tones were suddenly replaced with the unmistakable rumble of a high-performance car rapidly approaching from behind. In anticipation of a pursuit he reached for his seat belt and fired up the engine.

Returning to the Astra DS, Murphy glared at the speeding vehicle as it screeched passed them doing at least fifty in the thirty zone. Hastily opening the passenger door, he jumped in, dropped two greasy paper bags onto his lap, before wrestling with his seatbelt.

‘I’d put money on it being nicked. Twenty grand’s worth driven by a maniac in a red cap,’ Blake said, tracing the black Audi TT as it cut straight across the path of an oncoming van and carved through the traffic heading up Lichfield Street.

‘Could be a boy racer,’ Murphy said as his boss hit the siren, then the accelerator and flew towards the busy Joiners Square roundabout. They swerved around a flatbed pickup, avoiding collision with a red Nissan Duke by the tightest of margins. Blake glanced in the rear-view mirror at the chaos he’d caused: cars screeching to a halt, horns blasting, bringing the roundabout to a standstill.

‘Shitting hell, Tom! You trying to kill us before breakfast?’

Focusing on the road ahead he didn’t reply. The back end of the car drifted as he headed up the incline, slamming through the gears, adrenaline pumping through him like an electrical surge.

If you fancy reading on then you can read the rest of chapter one here. I grew up in Stoke-on-Trent and spent many years doing less than ideal jobs in and around the Potteries five towns, before finally taking the plunge and quitting work to follow my creative side. As a keen horse-racing fan, I started off in 2007 self-publishing betting how-to manuals.

This is my main business, but my real passion is for crime fiction, both reading and writing.

Inspired by authors such as Mel Sherratt, Peter James, Val McDermid, James Oswald, Kate Ellis, Martina Cole and Ian Rankin, and in need of a new challenge, I decided to try my hand at writing crime fiction.

After months of hard slog and sheer determination, I finished my first novel: The Killer Shadow Thieves. This is the first in a planned series of gritty crime fiction books set in Stoke on Trent, involving charismatic DI Tom Blake and his larger-than-life sidekick DS Jon Murphy.

The follow up, The Deadly Legacy, is a cult serial killer thriller, with a 200-year-old secret at the heart of a plot full of unexpected twists, which push the relationships of a rich pottery family into life-threatening conflicts.

I write tense, gripping, crime fiction mysteries with a twist – or urban crossbreed, as I call it. My thrillers take you deep inside the criminal mind.

I live with my wife and family in Stoke-on-Trent, England. You can find out more about me on my website, or on Twitter.