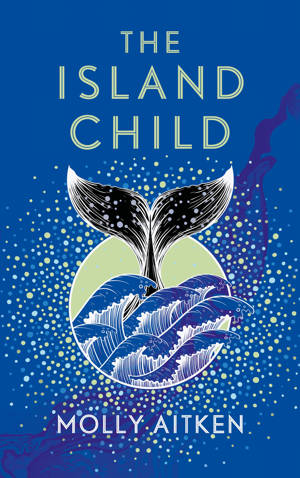 Posted on 6th February 2020 By Nicola

Welcome to my stop on the blog tour for The Island Child by Molly Aitken. I’m sharing a beautiful extract from the very beginning of the book with you today. My thanks to Katie Huckstep from Canongate for the place on the tour and for sending a proof copy of the book.

Twenty years ago, Oona left the island of Inis for the very first time. A wind-blasted rock of fishing boats and turf fires, where girls stayed in their homes until they became mothers themselves, the island was a gift for some, a prison for others. Oona was barely more than a girl, but promised herself she would leave the tall tales behind and never return.

The Island Child tells two stories: of the girl who grew up watching births and betrayals, storms and secrets, and of the adult Oona, desperate to find a second chance, only to discover she can never completely escape. As the strands of Oona’s life come together, in blood and marriage and motherhood, she must accept the price we pay when we love what is never truly ours . . .

Rich, haunting and rooted in Irish folklore, The Island Child is a spellbinding debut novel about identity and motherhood, freedom and fate, and the healing power of stories.

The Virgin in the Storm

My mam whispered the story of my birth to hook the fear in me, to keep me shut up at home with her, but as a child I loved to hear how I came to the island, because it linked me to him, the other baby born during the storm.

Mam told it like so: she was stood by the wall in front of our cottage, waiting. No one was about on the road or in the fields, but below her the bay was busy with boats. Purple clouds climbed the blue; thin and wispy at first and building to heavy stacks that spread like flames in the gorse. A storm prickled in the air. Mam scanned about for Dad’s currach but didn’t know his from any other. She thanked God my brother Kieran and the baby Enda were too young to be out and were safely playing in front of the neighbour Bridget’s hearth so Mam could arrange the house before I came. Already the fishermen were struggling back towards the pier against the sharp-toothed waves. The fear had lit the men.

On the island, the sea was what separated women from men. Women weren’t taken by the water. Instead, mothers were drained by the dropping tears over the bodies of their dead sons. Grandmothers vanished into old age early, almost as quick as waning moons, and girls were drowned in the tides of birthing blood. Men fought death on the sea, women in the home.

Mam pushed away these thoughts and turned her focus inwards. For weeks I’d been beating against her belly like a bird trapped in a chimney. She couldn’t wait to be rid of me and not a drip of terror had entered her about it. She’d already had my two brothers without a bother. What could go wrong with the third?

Thunder rumbled as far off as the mainland, rolling in across the waves to shake the stones, waking the giant, sleeping whale beneath, the mother of the island. Mam had never heard the tale – and it was the outsider Bridget who told me – but still, Mam felt the whale’s shudder and unease build in her as she watched two currachs skip further out across the swell. She could picture the laughter on Dad as he and the other rowers pushed on into the wild waves. If the sea stole him, Mam would be left to fend for herself with three children and she knew if she was alone the island would kill her. She told me all this on one of our many drawn-out days of sighs and work in the kitchen, but still I must have sensed her weakness. With my new fingernails I scratched at a thread inside her and snapped it. Water splashed her bare feet – I couldn’t say why she wore no shoes on that day but before she had me she must’ve lived in a wilder, happier woman.

Pain ripped through her then and she sank to her knees as if to pray but it was curses that appeared on her tongue – I know because I shouted those words myself when I was having my own daughter – but, unlike me, my mam swallowed them down, leaving them to rot in her chest.

Mam hauled herself through the doorway and forgot to look back to see if Dad’s boat was coming home.

A square of light shifted across the floor and was extinguished with rain slashing through the wide-open door. Mam sat on the floor, lips bleeding from biting back the shouts inside her while the Virgin watched her from the dresser, a string of prayer beads wrapped around her saintly neck and a wilting meadow flower at her porcelain feet. For the first time since Mam had landed on the island, she didn’t pray to the mother of Himself. She never told me why, but it might have been because she felt she couldn’t live up to the Mother of Mercy with whom she shared a name or she believed a mortal woman was no good in a case as bad as me.

With Mary’s painted blue eyes burning her back, Mam braced herself against the wall and pleaded with God – she only ever made the big requests to him – to cut the agonies of me, her child, away, but like most men, he wasn’t one to involve himself with women’s matters.

Somehow Mam got herself into the big room. Lightning flashed in the matchbox window and was swallowed by the dark clutch of the storm. The pains tearing through Mam went on and on and on but I gave her no urge to push. She wouldn’t let herself think this was different from the times before but somewhere at the back of her mind she knew I would be the difficult child.

She prayed again to God and listened for his answer, but all she heard was the tormented roar of the storm. Where was Ardàn? Why didn’t Bridget return the boys to her? Through the open bedroom door the kitchen stared its blank emptiness at her. She laid herself on the bed and gave in to the moans and shouts. Molly Aitken was born in Scotland in 1991 and brought up in Ireland. She has an MA in Creative Writing from Bath Spa where she won the Janklow and Nesbit Prize.

The Island Child is her first novel.

Molly now lives in Sheffield with her husband.