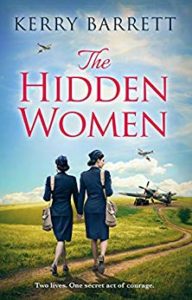 This book sounds right up my street so I’m delighted to be taking part in the blog tour for it today. Unfortunately, I wasn’t able to fit in a read of it so I have a fab extract to share with you instead. Hope you enjoy it. My thanks to Izzy Smith from HQ Stories for the place on the tour.

Berkshire, 1944
When Will Bates offers to take ATA pilot Lilian Miles to the dance, he sends her heart into a flutter. But as their relationship progresses, Lilian can’t help but get cold feet. Deep down she’s always known that the secrets locked in her past would weigh heavily on her future happiness…

London, 2018
Helena Miles loves nothing more than digging into the back stories of celebrity families, making her perfectly suited for her job as a researcher on the hit show Where Did You Come From?. But when handsome superstar Jack Jones sweeps into her life, she unexpectedly finds herself trawling through her own family history.

As she explores her family’s past, she discovers that there are far more secrets hidden there than she ever expected… What really happened to her aunt Lilian during the war, and why can’t she open up about it now?

An inspirational tale of sisterhood and strength, perfect for fans of Tracy Rees and Kathryn Hughes.

‘Here?’ I said, staring at my boss Fliss in astonishment. ‘Jack Jones is coming here?’

‘Yes, here,’ she said, resting her hand on her computer keyboard as though to warn me I was about to lose her attention. ‘Apparently he’s very interested in social history and he wants to know how you work. It’s no biggie.’

‘But I’ve  got a system,’ I said, knowing it was no good protesting when Fliss had decided something. ‘I don’t want him to mess it up.’

‘He’s not taking over, Helena, he just wants to know how you’re getting on.’ Fliss sounded impatient. ‘He’ll be here after lunch.’

I forced a smile. ‘Fine,’ I said. ‘I’ll get some stuff together.’ I wandered back to my desk feeling wrong-footed.

‘What’s with the face?’ asked my colleague Elly as I sat down. ‘Did Fliss tell you off?’

I wiggled my mouse to wake up my screen. ‘No,’ I said gloomily. ‘She told me Jack bloody Jones is coming in this after- noon to see how I’m getting on with my research.’

I blinked at her. Did she really mean me to be quiet?

‘Jack Jones is coming here? THE Jack Jones? We never get to meet the celebs,’ Elly was beginning to babble. ‘I’ve worked on this show for five years and I’ve never met one single person whose family history I’ve researched. Have you met anyone?’

‘No,’ I said. She was right. I’d not worked on Where Did You Come From? as long as Elly had, but I’d researched the family trees of lots of celebrities and not been so much as introduced to anyone.

I nodded. ‘It’s an interesting one, actually. His great-grandfather was at the Somme …’

I trailed off as Elly waved her hand to shush me.

‘He’s gorgeous,’ she said. ‘Properly handsome. And I’ve heard he’s going to be in that new superhero film soon so he’ll be a massive Hollywood star.’

I nodded again. I knew who Jack Jones was of course – star of the latest Sunday night detective drama that was wowing audiences, and tipped for superstardom – and Elly was right, he was gorgeous. In any other circumstances I’d love to meet him. But I had a certain way of working, and a system, and a process, and I didn’t appreciate interference or anyone checking up on me, however handsome they were.

She gaped at me. ‘Seriously?’ she said. ‘The meeting with Jack Jones?’

I couldn’t help laughing at her face. ‘Yes, the meeting with Jack Jones,’ I said. ‘I could do with the help.’

Elly was getting up from her chair. She pulled on her coat and picked up her bag as I looked on in confusion.

‘It’s a yes,’ she threw back over her shoulder as she headed for the lift. ‘I’m going to buy a new top and get my hair blow-dried.’ Chuckling to myself I turned back to my screen. We worked  on more than one celebrity story at a time and I was currently tracking the maternal line of a breakfast TV presenter. I’d got right back to the early 1800s and I thought I might be able to go further if I was clever about it.

I clicked on to the census web page I used, intending to get back to work, though I couldn’t concentrate on Sarah Sanderson properly with the news that Jack Jones was coming into the office weighing on my mind. I absolutely loved my job and I considered myself to be really lucky that I’d landed this role on Where Did You Come From? Social history may have been my passion but it wasn’t exactly well paid – so making the jump into television was brilliant for me – and I enjoyed the research as well as seeing the process of the show being made. My colleagues were lovely, and Fliss was very understanding when it came to having to rush off on time each evening to collect Dora from nursery, or working from home when she was ill.

Spinning round in my chair, I surveyed my shelves of neat brown folders, each with the name of the celebrity written along the spine and arranged in alphabetical order. I ran my finger along them until I found J and pulled out the Jack Jones file. I’d found out quite a lot about his family already so I had things to tell him. But today I was supposed to be working on Sarah Sanderson’s family history. Giving up an afternoon to Jack Jones was going to throw everything out.

I opened the folder and looked at the picture of him clipped to the front cover. I liked to have a photo of each person so I knew whose family I was researching – especially for those celebs I didn’t really know much about. It helped them become real for me, and then their families became real, too.

Elly was right, Jack Jones was really handsome. He had glossy brown hair that was longish and curlyish and flopped over his forehead, and a smile with a hint of mischief. I felt a brief flicker of excitement. Though I wasn’t a massive fan of the whole celeb thing – I couldn’t name the Kardashians or the members of One Direction – I had really enjoyed the detective series that Jack had starred in. I wondered if it would be weird to discuss the cryptic ending with him and decided it would be a bit fangirl. Mind you, I thought, not as fangirl as Elly getting her hair done.

I picked up my phone, smiling at the picture of Dora wearing my sunglasses on my home screen, and took a photo of Jack’s picture, then added it to my siblings’ group chat.

‘Guess who I’m meeting this afternoon …’ I typed.

Almost straight away, my baby sister Imogen replied. ‘OMG!’ she wrote. ‘Is that Jack Jones? I love him!’

I grinned. Before I could reply, a message arrived from my other sister, Miranda. ‘I have no idea who that is,’ she wrote. ‘But he’s easy on the eye.’

I smiled again. My sisters were nothing if not predictable. ‘Has anyone heard from Andy?’ Another message pinged through from Miranda. ‘I can’t see if he’s getting these. Immy manages to reply all the way from Africa and he can’t be bothered to keep in touch from Scotland.’

I made a face at my phone. I adored my big sister Miranda but she could be a bit of a mother hen. Not surprising, I supposed, when you thought about what she’d had to take on when we were kids, and I’d never forget how she’d been there when I needed her when Dora was born.

‘He’s probably not on Wi-Fi,’ I typed. Andy was on an archaeological dig somewhere on a windswept island in the North Sea-hardly hanging out in a coffee bar in Glasgow as Miranda obviously thought. ‘He’ll check in when he can.’

I threw my phone into my bag and pulled out my make-up. If Elly was dolling up to meet Jack Jones, then perhaps I should do the same. Kerry Barrett is the author of eight novels, including the Strictly Come Dancing-themed A Step in Time, and The Girl in the Picture, about a crime novelist who solves a 160-year-old mystery.
Born in Edinburgh, Kerry moved to London as a child, where she now lives with her husband and two sons. A massive bookworm growing up, she used to save up her pocket money for weeks to buy the latest Sweet Valley High book, then read the whole story on the bus home and have to wait two months for the next one. Eventually she realised it would be easier to write her own stories…

Kerry’s years as a television journalist, reporting on EastEnders and Corrie, have inspired her novels where popular culture collides with a historical mystery. But there is no truth in the rumours that she only wrote a novel based on Strictly Come Dancing so she would be invited on to It Takes Two.

When she’s not practising her foxtrot (because you never know…), Kerry is watching Gilmore Girls, reading Jilly Cooper, researching her latest historical story, and hiding her massive collection of sparkly nail varnishes from her husband.