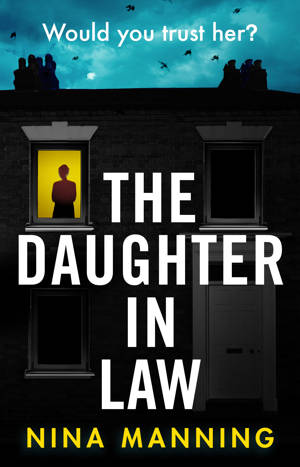 I’m delighted to be taking part in the blog tour for The Daughter in Law by Nina Manning today, and to have a fabulous extract to share with you. My thanks to Megan Townsend from Boldwood Books for the place on the tour. Look at that fabulous book cover. That woman in the window looks very eerie to me.

No one is good enough for her son…

As a single mother, Annie has an especially close relationship with her son, Ben. They have always been together. Just the two of them. So, when Ben brings home his mysterious beautiful new wife, Daisy, immediately Annie doesn’t trust her. Who is this woman who has taken her son away from her? And what is she hiding?

She’ll protect him with her life…

When Ben disappears, suddenly Annie and Daisy are all the other one has. Alone in Annie’s big, remote house, just the two of them, the tension is rising. And like any protective mother, Annie will stop at nothing to expose her new daughter in law, and the secrets she is hiding…

My favourite room is the spare bedroom at the front of the house. It gets all the light in the morning and looks so inviting. I’ve done it up like a picture I saw in a lifestyle magazine: a checked throw across the end of the bed, floral sheets and hooked back curtains, a little wicker chair in the corner with a few well-read paperbacks stacked on top of it, and a white vase on the bedside table. It really is the most comforting place to be. Of course, no one ever uses it. I like to keep the house looking nice. But it was only ever going to be me and my son.

Getting out of bed was particularly hard this morning. It has been every morning since Ben left. I keep thinking, what is the point? I’ve been feeling that empty hopelessness for several months now. Since Ben deserted me.

I’d heard all about empty nest syndrome but I never imagined for a moment it would happen to me. I never actually thought he would leave. I thought we would just keep existing together. Forever.

He kept so much of his stuff here initially, that I felt sure he would return – but just last month, he came and took the lot.

It’s so quiet here now. It was quiet anyway, that’s why I took the house. It’s the house I grew up alone in with my father, but fled from as soon as I was able to support myself.

How do you define an unhappy childhood? In those days it was unheard of to make an allegation about your relative. I accepted the violence – it was, after all, part of him and all I had ever known. Throughout my motherless upbringing, the beach house provided a sanctuary for me with plenty of places to hide. I got stealthier as I grew and with my legs pulled up tightly into my chest and my head pressed to my knees, I would squeeze myself into an alcove, the airing cupboard or the shed with the ringing sound of my father’s threats in my ear. Later on, I would sneak out and find my way back to my bedroom past my father’s drunken snores. The next day he wouldn’t remember a thing. Had I not been able to escape down to the shore to skim pebbles or poke about in rock pools, then I would have run away sooner. The sea kept me safe. But as soon as I turned sixteen I took myself hundreds of miles away. I never heard a whisper from my father, who had told me daily I reminded him too much of my brazen excuse of a mother. Then he was dead and the beach house was mine. I left it sitting empty for a while, too scared to return, too busy trying to salvage my own marriage. Then Ben arrived and I knew it was time.

When I returned here all those years later with my son, it was fairly run down and rotting in places I couldn’t get to, much like my father for all those years. The brown weatherworn cladding needed a sand down and varnish and the white framed windows were peeling, but overall the exterior wasn’t so bad. I did the best I could with it and I could overlook most of the natural decay when I scanned the vast horizon and breathed in the fresh sea air.

It’s a remote spot, perched right on the edge of the peninsular before it slopes round into the sea. Standing in the garden or looking out of the window, you would be forgiven for thinking there were no houses for miles, but there is one around along the shore and to the left and then they begin to scatter more frequently as they feed towards the village. People rarely walk this far down as the shore is a little more rustic with huge pieces of driftwood and great mounds of seaweed washing up daily. Besides, the stretch of beach at the end of the garden and over the low battered wall essentially belongs to me. We are protected a little from the wind by a few surrounding trees, but it does get a little breezy here at times. But when it’s still and the sea looks like a flat piece of mirror you could walk across, that’s when I love it the most. Of course, I love the waves too, especially the ferocious ones that thrust themselves towards the wall. I like to watch those waves and feel my own fury in them.

A house on the seafront, much like a savannah plain, is the perfect spot to see when enemies are approaching. And anyone who tries to come between me and my son, I consider an enemy.

But despite the weather and the waves, I know the house is empty. And although I try to fill my days with mundane daily tasks, I too feel empty. I need to feel fulfilled again. I need my son back. Back where he belongs.

There’s no one downstairs humming a tuneless song whilst they make their breakfast. There are no dirty trainers in the hallway, or piles of washing in the laundry basket. There are no toast crumbs on the kitchen side, or butter streaks in the marmite. The house is so eerily quiet. I have never experienced this. Not since having Ben. I forced all the bad memories away from the time I lived here as a child and made it all about me and Ben. It’s our sanctuary; our hub. Our place away from the world.

Now he’s gone. He hardly texts or rings. She has him wrapped around her little finger. Calling all the shots no doubt.

It was a real shock when Ben told me he had met someone. It was more of a shock when he told me he had gone and gotten himself married. He had been spending a lot of time at her house, that I knew. But I had no idea things had evolved so quickly. And to have done it without telling me, his own mother, first. We used to be so close. I am not coping so well.

I did the right thing, of course. I invited them over for something to eat – mostly because I needed to get a good look at the woman who thinks she has replaced me.

But I know it’s only temporary. I can’t be replaced. My son can’t live without me. Nina Manning studied psychology and was a restaurant-owner and private chef (including to members of the royal family). She is the founder and co-host of Sniffing The Pages, a book review podcast. She lives in Dorset.