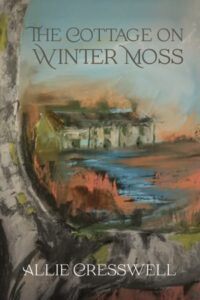 I’m delighted to be sharing an extract from The Cottage on Winter Moss by Allie Cresswell today as part of the blog tour. My thanks to the author for asking me to be a part of it.

The eBook is available now – here’s the buy link.

Burned-out author Dee needs fresh inspiration. Impetuously, she abandons London and her good-for-nothing boyfriend to go wherever her literary quest takes her. Journey’s end is a remote village on the shores of a wild estuary, overshadowed by a ruined pele tower. She rents Winter Cottage and waits for a story to emerge.

The bleak beauty of the whispering dunes, the jacquard of colour and texture of the marsh and a romantic tree in a secluded glade—The Trysting Tree—all seduce Dee. Nevertheless, the secretive behaviour of a handsome neighbour, lights across the marsh, a spurious squire and a bizarre, moonlit encounter all suggest there is something odd afoot.

Local gossip and crumbling graveyard inscriptions give Dee the opening she needs. She begins to weave hints about the tragic history of a local family, feuding brothers and a fatal fire into a sweeping historical saga. Her characters clamour for a voice as the tale spools effortlessly onto the page—demanding to be told. Dee feels more like its instrument than its instigator.

As she becomes enmeshed in the local community, Dee is startled to find her fiction unnervingly confirmed by fact, her history still resonating in the present-day.

Is she being guided by echoes of the past?

One of the most wonderful things about writing The Cottage on Winter Moss has been the opportunity to describe the landscape and weather that prevails here where I am lucky enough to live, in the far NW corner of Cumbria. The story spans a five-month period of winter, and I wrote it in real time, transferring the horizontal rain, the thick hoar frost and—as in this extract—the eerie mists from where they manifested themselves outside my window onto the pages of my tale.

I had not intended my story to have any weird or spooky elements but they crept in anyway. My protagonist, Dee, is a writer who has travelled to the far northwest in search of fresh inspiration. The village where she settles is strange, remote, very insular, and she is conscious of undertows of history, a story that needs to be told but about which local lips are sealed shut. The oddness of an unfamiliar place and things not understood are augmented by odd lights across the Moss, strange noises in her cottage and—as here—people met in the half-light of shadows whose identity, nature and appearance seem oddly veiled.

The sun had disappeared from the Moss leaving a strange miasma of mist in its wake. I stood on the doorstep, my coat on and boots laced, but hesitant now to venture out. The mist seemed to exude from the ground itself, like steam—a weird emanation of curling vapour and morphing shapes lit from within, much brighter than the surrounding twilight. It boiled up, spilling over the informal hedge that separated the track from the Moss, reminding me of dry ice in nightclubs I had frequented many many years before. It snaked in ghostly tendrils towards me. Bob, who had gone off to pursue his own doggy agenda when I opened the door, had disappeared. In the thick, diaphanous mist I couldn’t see him at all. I whistled, but the sound of it was deadened, swallowed, and soaked by the damp, writhing air.

I called him. ‘Bob! Bob! Come! Come on, boy!’ but there was no answering bark, no disturbance in the wall of roiling vapour that had now filled the track, absorbed the trees and was coiling itself through the gate and into my little garden, around my feet, and beginning to press against my face like a thick veil. I felt suffocated, but I couldn’t go back inside and leave Bob out in these conditions. I stepped down into the whorling brume and edged forward along the track, taking small, hesitant steps, my arms stretched out in front of me.

By instinct and the kind of body memory dancers use to learn their moves, I found myself on the bridge. It was thick with hoar frost; I felt the crunch of it beneath my boots. The water beneath the bridge was a floe of cloud that boiled up and up, swamping everything. I turned back to see if I could make out the glow of light from the cottages, but everything behind me was obscured in a cliff of fog. I turned again and took a step. I mustn’t have turned a full one eighty degrees—I don’t know what saved me from stepping over the edge of the bridge—my boot found only insubstantial murk. Thankfully I hadn’t committed my full weight to it and I leaned back, helicoptering my arms to keep my balance, almost fell, stumbling back onto the planks and disorientating myself still further. Now I didn’t know which way was which, where home lay, where the Moss, where were the edges of the bridge.

I heard a noise behind me and swung round. ‘Bob?’ I called into the fog.

‘No,’ came a low voice I did not recognise. It startled me with its proximity; so close, and yet I could not see a thing. The mist shifted, exuded a hand, an arm, the tenuous shape of a man hardly more substantial than the fog that surrounded it. He could not have been more than two arms’ lengths in front of me but the mist was so thick I couldn’t make out more than just the nebulous outline of head, shoulder, torso. They melded into one another, barely defined at all.

I hesitated. The hand he held out to me seemed benign, though extraordinarily pale. Palm upwards, it was impossible to discern its age or anything about its owner. It was not calloused, not nicotine-stained, not dirty. It wore no ring. Its lifelines were blurred, smudged, the faint tracery of vein in its wrist was no more than a fine shadow on its pallid skin, disappearing into a colourless cuff.

‘Bob …’ I began, looking back over my shoulder.

I sensed—rather than saw—a shake of the head. ‘He’s all right. Waiting for you, by the gate. Can’t you hear him whining to be let in?’

I put my head to one side, straining to hear through the deafening, deadening murk.

‘He is,’ said the voice. The fingers of the hand before me curled its fingers once, twice, beckoning me.

I reached out and put my hand in his. It was so cold that I almost flinched and snatched my own hand back, but his fingers gripped mine and drew me forward across the rough, crusted planks of the bridge and back onto solid ground. I felt the brush of bracken against my trousers, the stony surface of the track beneath my feet. No matter how many steps I took, the man who led me remained obscure, moving as I did, maintaining his distance, keeping himself shrouded in the thick pall of fog. At some point he moved to my side, retaining my hand in his, but still too distant for me to see anything other than an indistinct outline. I reached my other hand out to touch him, to garner something from the texture of his clothes, the heft of his figure. My hand disappeared through the mist as through a curtain, with only empty air beyond.

Allie was born in Stockport, UK and began writing fiction as soon as she could hold a pencil.

Allie recalls: ‘I was about 8 years old. Our teacher asked us to write about a family occasion and I launched into a detailed, harrowing and entirely fictional account of my grandfather’s funeral. I think he died very soon after I was born; certainly I have no memory of him and definitely did not attend his funeral, but I got right into the details, making them up as I went along (I decided he had been a Vicar, which I spelled ‘Vice’). My teacher obviously considered this outpouring very good bereavement therapy so she allowed me to continue with the story on several subsequent days, and I got out of maths and PE on a few occasions before I was rumbled.’

She went on to do a BA in English Literature at Birmingham University and an MA at Queen Mary College, London.

She has been a print-buyer, a pub landlady, a book-keeper, run a B &amp; B and a group of boutique holiday cottages. Nowadays Allie writes full time having retired from teaching literature to lifelong learners.