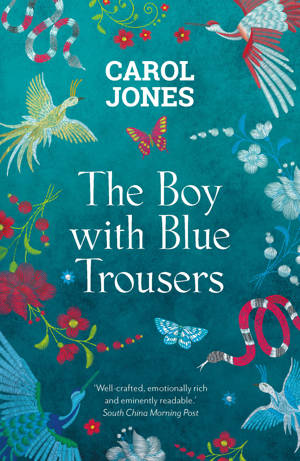 Welcome to my stop on the blog tour for The Boy With Blue Trousers by Carol Jones. Isn’t that cover a stunner? I’m sharing a fabulous extract from the beginning of the book with you today. My thanks to Lauren Tavella from Head of Zeus for asking me to be a part of the tour.

On the goldfields of 19th century Australia, two very different girls are trying to escape their past.

English governess Violet Hartley has fled from England after a scandalous liaison. Now she is angling for a rich husband and a new life.

Little Cat is fleeing from her home in Southern China after killing the powerful old man who tried to abuse her. Disguised as a boy, she joins the huge Chinese workforce on the goldfields of Victoria. But the son of the murdered man is on her trail, intent on vengeance. Violet Hartley becomes first suspicious, then jealous of the delicate looking Chinese boy.

The handcart was almost too heavy to lift. It bumped and wobbled around mullock heaps, skirting gaping holes, threatening to spill its cargo onto the pockmarked earth. Steadying the cart, the youth braced for the descent into the gully. In the distance, campfires flickered like fireflies amongst the tents, whilst ahead the bush beckoned.

The gully’s banks were ridged with erosion where an army of miners had been at work, shovelling and sluicing with water dragged up from the creek. Makeshift plank bridges spanned the depleted creek as it trickled through the diggings. The gully wasn’t deep but its banks were steep. The handcart was heavy and its load uneven. One false step and the cart would escape, hurtling over uneven ground to fling its contents into the water.

The youth paused, searching the night sky. But the skies of this southern land had never offered any heavenly guidance. They were alien, just as the land was alien. Wild and brown, populated by outlandish creatures and unfathomable men. Dry and dusty, with grey-leaved trees that shed bark in long, curling ribbons. A land that resisted order and thrived on chaos.

Although his arms were hard from the backbreaking work of mining gold, he started down the slope uneasily, taking one stuttering step then another, his blue cotton trousers hemmed with dust.

But the cart dragged him forward, intent on yanking him from his feet. Gathering speed, it rumbled over a ridge of earth before becoming briefly airborne so that its contents shifted, sliding sideways, threatening to topple cart and youth in an untidy heap. Straining every muscle, he twisted his forearms, battling the dead weight of cart and cargo. Then, in a semi-crouch, he used the power of his legs to halt the runaway cart.

Breathing hard, he rested halfway down the gully’s bank, the cart stable for the moment. But its contents had moved so that one blue-clad leg dangled over the edge, the foot bare and covered with scratches. He grabbed the leg by the ankle to place it back where it belonged, finding the flesh still warm, its heat sending a jolt through his arm.

Cradling the leg, he felt a dense mass fill his throat, as if everything that had happened in the past year was rising up to choke him. His gaze lingered on the figure curled up in the cart – arms crossed haphazardly over chest, a single braid draped about the neck – and he felt hot tears well. How had it come to this? How had they found themselves so far from the ordered groves and rice paddies of the mighty Pearl River? Why had the gods of the Celestial Kingdom abandoned them? And how had they come to hate each other so?

They had been friends of a sort once. Born in Brisbane, Australia, Carol Jones taught English and Drama at secondary
schools before working as an editor of children’s magazines. She is the author of
several young adult novels as well as children’s non-fiction.

Thank you @hqstories for #TheAlibiGirl by C J Skus

Thank you @hqstories for #LittleWhiteLies by Phili

New review: All the Rage by @carahunterauthor. Pub

New review: She by HC Warner Published by HQ and o