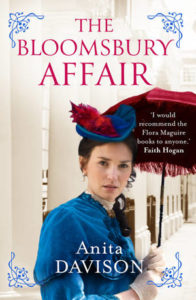 I’m so pleased to be sharing an extract from The Bloomsbury Affair by Anita Davison today as part of the blog tour. Look at that gorgeous cover! My thanks to Vicky Joss from Aria for the place on the tour.

1905 London is a heady mix of unimaginable wealth and simmering political tensions, and with war looming Flora Maguire wants to keep her family safe.

So when her beloved charge Viscount Edward Trent is accused of murder, she’s determined not to leave the investigation to the police. Flora has trodden the path of amateur sleuth before, but with so much at stake, this time it’s personal.

Slowly the body of the victim found stabbed on a train bound for Paddington starts giving up its secrets, and Flora and her husband Bunny become mired in a murky world of spies, communists and fraudsters. And with the police more sure than ever that Edward is their murderer, Flora must work fast to keep him safe.

‘Good evening, everyone. Do forgive my being late.’ Bunny strode to the table where he shook William’s hand vigorously and kissed Alice’s cheek before taking the remaining empty chair.

Flora signalled to Stokes to serve the dessert, when Alice placed a restraining hand on her arm.

‘We’re in no hurry, are we? Why don’t we let Bunny eat his entrée first? After a hard day at work he deserves his dinner.’

‘As long as no one minds,’ Bunny raised his eyebrows in appeal at Flora. ‘I am rather hungry.’

‘Not at all, old fellow,’ William said before Flora could react. ‘Gives us time to let that excellent meal settle. Besides,’ he continued when the door had closed on the butler, ‘Flora has been keeping us entertained. Hasn’t she, Lily – sorry, I mean, Alice.’ He grinned, embarrassed. ‘It will take a while to become accustomed to that name.’

‘Lily Maguire no longer exists in any meaningful way.’ She aimed a sultry look at him through lowered lashes. ‘Everyone knows me as Alice Finch, and after twenty years, that’s who I am.’

‘I always loved your name, although Alice is equally charming,’ William, said, his gaze never leaving her face.

Flora directed a ‘see what I mean?’ look at Bunny, whose lips twitched as he poured himself a glass of water.

‘William was about to tell us about his recent trip to St Petersburg,’ Flora said, steering the conversation back to firmer ground. Despite an overweening ambition to reunite her parents, watching them staring into each other’s eyes like prospective lovers made her feel uncomfortable.

‘I’ve always wanted to go there,’ Bunny said. ‘I’ve heard it’s a beautiful city and the people are amenable.’

‘Not at the moment, it seems.’ Flora dared William with a look to change the subject. ‘The newspapers talk about nothing but riots and strikes.’

‘It’s true, I’m afraid.’ William cradled his wine glass in both hands. ‘The factory workers suffer harsh, unsafe conditions and all attempts to form trade unions are fiercely put down by the factory owners, who in turn are strongly backed by the government.’

‘I thought Tsar Nicholas’s father, Alexander, had abolished the serf system? Or am I being naïve?’ Flora looked to Bunny for his reaction, but he absent-mindedly broke apart a bread roll, his attention elsewhere.

‘He’s taking a hard line with anyone who raises a voice against him,’ William replied. ‘Tsar Nicholas is the richest ruler in the world yet he prefers to live like a country squire devoted to his wife and children. Matters of state take low priority. He avoids making decisions unless forced to, and when he does, he overreacts because he has this morbid fear he’ll be assassinated like his grandfather.’ He paused to take a sip of wine, his eyes troubled.

‘It’s brutal.’ Flora gave an involuntary shudder. ‘I’m not even Russian, and I’m angry with him.’

The conversation trailed off when Stokes reappeared with a covered plate he set before Bunny, lifting the lid like a magician, releasing a savoury aroma of roasted meat.

‘This looks wonderful, Stokes, and very welcome.’ Bunny rubbed his hands together over his plate. Stokes inclined his head with a wry smile implying he claimed full credit.

‘Tell us more about Russia, William,’ Alice asked. ‘I doubt I shall ever go there so I’ll have to learn about it second-hand from you.’

‘It’s a country of contrasts, where the magnificence of the Imperial Court is astonishing. However, the protocol involved in dealing with even minor members of the court stifles any meaningful discussions.’

‘Were you there for that protest march in St Petersburg when those workers were shot?’ Bunny became more engaged in the conversation, perhaps because he was no longer hungry.

‘I was, and it wasn’t so much a protest as a massacre.’ William twisted the stem of his wine glass. ‘Over a hundred people were killed by Cossacks and three times that number injured, when all they asked for was better working conditions and an end to the war with Japan.’

‘There won’t be any real fighting in Russia, will there?’ Alice asked. ‘Or is it my turn to be naïve?’

‘Not if the Tsar can be made to see sense.’ William’s tone betrayed the fact he harboured grave doubts. ‘He’s not a bad man, simply weak.’

‘Their war with Japan doesn’t make things easier,’ Bunny added. ‘All because the Tsar reneged on an agreement to withdraw troops from Manchuria, or did I get that wrong?’

‘A simplified version, but accurate,’ William said. ‘Grand Duchess Olga told me she hoped the soldiers would kill all the Japanese. When I asked her if she also meant the children, she said she didn’t realize they had any. She thought the Japanese were creatures, like monkeys.’

Flora gasped. ‘Whatever did you say to her?’

‘I told her the truth, of course. Olga is only eight years old, but she’s an intelligent child, so I trust I made an impression.’

‘It’s hardly the child’s fault.’ Alice sighed. ‘The Grand Duchesses rarely see real life outside the palace walls at Tsarskoe Selo. If the Tsar has little insight into what goes on in the real world, how can they?’

‘The Tsar and Tsarina must be delighted about the new baby.’ Flora attempted to lighten an atmosphere that had grown sombre. ‘A male heir after four daughters must be such a relief for Alexandra.’

‘I’m afraid the child is a mixed blessing.’ William closed his eyes briefly. ‘Tsarevich Alexei shows signs of having the bleeding disease. He might not live very long.’

‘I had no idea,’ Alice said, horrified. ‘I’ve not seen any reports in the newspapers.’

‘You wouldn’t have,’ William shook his head. ‘It’s being kept quiet, though for how long is anyone’s guess.’

After his initial enthusiasm, Bunny appeared to have stopped listening and had resorted to picking at his food, his thoughts far away.

‘Is everything all right?’ Flora asked in a whisper.

‘Of course, why shouldn’t it be?’ Bunny recovered himself quickly. ‘This lamb is delicious, Flora. It certainly hasn’t suffered from being kept warm.’

‘Then perhaps you’ll let Mrs Cope know you appreciate her efforts, or you may find you’re served cold eggs for breakfast.’

‘Don’t I always?’ Bunny smiled briefly but his amiable mask slipped slightly, convincing Flora something was bothering him.

‘I heard the Imperial family refuse to go anywhere these days without guards,’ Alice said into the brief silence. ‘Wasn’t one of their Grand Dukes assassinated recently?’

‘He was, Grand Duke Sergei.’ William’s voice dropped. ‘I was there at the time.’ Flora gasped and he covered her hand on the table. ‘I was in no danger, my darling, I promise.’

‘How can you say that if you were there?’ Her voice hitched slightly.

‘Do you feel able to tell us what happened?’ Alice asked gently, exchanging a look with her daughter. ‘Unless it would upset you, Flora?’

‘No, really. I want to know.’ Flora waved her away. Born in London, Anita has always had a penchant for all things historical. She now lives in the beautiful Cotswolds, the backdrop for her Flora Maguire mysteries.