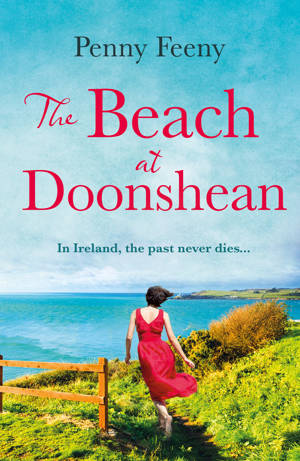 I’m so pleased to be able to share a lovely extract from The Beach at Doonshean by Penny Feeny with you today. My thanks to Vicky Joss from Aria for the place on the tour.

In Ireland, the past never dies…

Long ago, on a windswept Irish beach, a young father died saving the life of another man’s child.

Thirty years later, his widow, Julia, decides to return to this wild corner of Ireland to lay the past to rest. Her journey sparks others: her daughter Bel, an artist, joins her mother in Ireland, while son Matt and daughter-in-law Rachel, at home in Liverpool, embark on some soul-searching of their own.

As the threads of past and present intertwine, Julia’s family confront long-buried feelings of guilt, anger, fear and desire.

Only then can they allow the crashing waves of the beach at Doonshean to bond them together once again.

This is a grown-up, thoughtful family drama for fans of Maeve Binchy and Patricia Scanlan

Rachael was stacking meringue nests into ivory towers. The radio was burbling in the background. Meringues were fragile and liable to crumble into dust at rough treatment, but they required little effort and would keep forever. She produced them regularly at her catering functions and liked to organise advance supplies. Checking her nests were wedged firm, she slotted lids onto containers and arranged them on the slate shelves of the old pantry. Wiping away the sticky residue of spilled egg whites, dumping the used equipment in the deep butler’s sink, she felt a satisfying sense of accomplishment. Then she glanced into the garden and saw the boy.

He was crouched in the middle of the lawn by the pear tree that had, until this instant, delighted her with its frilly white blossom. He was about nine or ten, a scrawny body muffled in a tracksuit. She couldn’t see his face or what he was doing but it looked suspicious. She thumped on the windowpane. The boy raised his head and then resumed his mysterious activity.

Rachael was nonplussed. She should challenge him, of course. The trouble was, she didn’t feel properly established in this house; she had only a toehold. It was the home where her husband, Matt, had spent his teenage years and he’d been reluctant to move back. He said it carried too much baggage and he’d rather have a fresh start. But Rachael, who had long coveted it, had pointed out the obvious advantages: the leafy location, the space, the garden, which would all be wonderful for Danny. It was far too big for just one person and if his mother chose to be generous, Matt shouldn’t be selfish.

No money had changed hands. Julia, newly retired, had moved into the city centre apartment they’d vacated and gone to visit old friends in the Dordogne while it was being refurbished. Rachael had been so elated she didn’t like to admit she was now having second thoughts: that perhaps she wasn’t quite ready for suburbia, or that living with shades of her mother-in-law – with the strong dark colours and functional furnishings – was discomfiting. She longed to redecorate in a scheme that would be as light and airy and floral as her favourite perfume, but until they could afford to do this, she felt almost as much a trespasser as the boy outside.

The Victorian villa had been one of the first built in the street. Its exterior had a worn, comfortable air like a well-thumbed book, but its neighbours were a hash of different styles and periods. The bungalow next door had been empty since its elderly occupant moved into a nursing home and Rachael noticed there was a gap in the privet hedge dividing the two gardens, just large enough for a child to squeeze through. She clattered down the short flight of steps from the kitchen and crossed the flagged patio.

The boy must have heard her but he didn’t react. He was crouching over a piece of slate. Earthworms and slugs were squirming across the surface and he was chopping them into bits with the sharp edge of a stone.

‘Whatever are you up to?’ exclaimed Rachael.

‘That’s not the way to do it!’ It was macabre and repulsive and she couldn’t bear to watch. ‘Shouldn’t you be at school?’

Danny was at school. It had been agonising at first to leave him drooping at the door of the reception class. But since Easter he’d rallied. He’d even let her say goodbye at the gate and watch him trot into the building with the staunch sense of duty he’d inherited from Matt.

The boy looked in her direction for the first time. His hair was shorn brutally close, his eyes rolled, wide apart. He had a scratch along his jaw and an outcrop of freckles that gave his face a rough innocence.

Surely he wasn’t coming to live next door? There was no sign of a removal van. ‘Well, you shouldn’t be in this garden, all the same.’

The boy’s lower lip jutted beyond the upper in an exaggerated pout. He scrambled up and with the toe of his trainer started pawing the ground. ‘She what lives here.’

‘I live here,’ said Rachael – a phrase she repeated often in her head for reassurance. Then she realised he was referring to Bel. Penny Feeny has lived and worked in Cambridge, London and Rome. Since settling in Liverpool many years ago she has been an arts administrator, editor, radio presenter, advice worker, and has brought up five children. Her short fiction has been widely published and broadcast and won several awards. Her first novel, That Summer in Ischia, was one of the summer of 2011’s best selling titles.