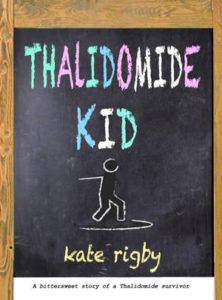 Welcome to my stop on the blog tour for Thalidomide Kid by Kate Rigby. I have an extract to share with you today and there’s also the chance to win a signed copy of the book. My thanks to Rachel Gilbey from Rachel’s Random Resources for the place on the tour.

Daryl Wainwright is the quirky youngest child of a large family of petty thieves and criminals who calls himself ‘Thalidomide Kid’.

Celia Burkett is the new girl at the local primary school, and the daughter of the deputy head at the local comprehensive where she is bound the following September. With few friends, Celia soon becomes fascinated by ‘the boy with no arms’.

The story of a blossoming romance and sexual awakening between a lonely girl and a disabled boy, and their struggle against adversity and prejudice as they pass from primary to secondary school in 1970s Cirencester. The story deals with themes and issues that are timeless.

This excerpt is when Daryl first walks into registration class at the secondary school, Cirencester High.

“Daryl Wainwright.” Mr Carver said it as a statement rather than a question when Daryl first sauntered into the Oakley One Terrapin during registration.

Daryl felt himself colour, his pink a fitting contrast to the salad cream flesh of Mr Carve Up. He knew his form teacher’s nickname from Glen, Stella, Vince, Martin and Sherrie. Mr Carve Up was a science teacher and this probably accounted for why the nickname had stood the test of time. After all, when you sat in the science labs, they were tainted with the smell of chopped and pickled creatures in formaldehyde. Mr Carve Up had been the focus of many a boy’s and girl’s macabre fantasies down the years.  He had the gaunt look of Dracula and it was said that his mind had gone a bit funny in the war. Some pupils had witnessed first hand the sliding of his mind, the first warning signs usually indicated by an unhealthy obsession with the war. The other rumour that abounded was that Mr Carve Up was a homosexual.

“Find yourself a pew then, boy.”

Daryl giggled – something he often did when embarrassed as it helped to break the ice and helped people giggle along with him – before slipping into an unoccupied desk in the front row, his red ears on show for all the pupils sitting behind. Still, better his ears than his hands, though that’d come soon. In fact, it came almost immediately. Children behind him were nudging and whispering. Got no arms, got no arms, look, shhh.

Nothing wrong with his ears.

Mr Carve Up asked one of the culprits to stand up. A girl with plaits, still trying to suppress a giggle, rose behind her desk.

Mr Carve Up flipped his ear forward. “Can’t hear you. Come out here and tell the whole class. Come on, don’t be shy.”

The girl walked to the front, still smiling sheepishly.

“You better stay there then until you’re prepared to share the joke.”

The girl looked at the floor below her knee-length pleats and grey socks. “I just said to my friend that he’s got his blazer round his shoulders.”

“And that’s a laughing matter, is it?”

“Master Wainwright, would you like to come out to the front?”

He would, he would! Mr Carve Up had read him right. They were all looking at him anyway, so he might as well give ’em summat to look at.

“Now let’s get this thing out of the way. Would you like to tell the class why you’re wearing your blazer over your shoulders?”

And it’s Thalidomide Kid, standing at the front of the class, telling them why he’s got no arms, and they’ve all gone quiet.  Oakley One has shut its gob. He’ll have to make ’em laugh with one of his jokes, that’s what you do when you’re Thalidomide Kid, you say, if you twist my arm, I’ll tell you more. And Thalidomide Kid’s got the whole class laughing and that has got to be better than them all just sitting there like a load of suet puddings.

“Right then, you’ve all had a good look,” said Mr Carve Up. “I’m sure young Wainwright will be happy to answer any more of your questions during morning break, but now hurry along, otherwise you’ll be late for assembly.”

Test One, passed. But there’d still be all the other classes and breaks and dinner times and after school, until he stopped being new and people got used to the way he looked, like at Lewis Lane.  And he wondered how Celia Burkett was getting on in Bingham One with her new form teacher and her new house colour, which was royal blue like the sleeping-bags he and Martin slept in. *Terms and Conditions –Please enter using the Rafflecopter box below. The winner will be selected at random via Rafflecopter from all valid entries and will be notified by Twitter and/or email. If no response is received within 7 days then the giveaway organiser reserves the right to select an alternative winner. Open to all entrants aged 18 or over. Any personal data given as part of the competition entry is used for this purpose only and will not be shared with third parties, with the exception of the winners’ information. This will collected by the giveaway organiser and used only for fulfilment of the prize, after which time they will delete the data. I am not responsible for dispatch or delivery of the prize and I will not be collecting any personal data.
a Rafflecopter giveaway Kate Rigby was born near Liverpool and now lives in the south west of England.  She’s been writing for nearly forty years. She has been traditionally published, small press published and indie published.

She realized her unhip credentials were mounting so she decided to write about it. Little Guide to Unhip was first published in 2010 and has since been updated.

However she’s not completely unhip. Her punk novel, Fall Of The Flamingo Circus was published by Allison & Busby (1990) and by Villard (American hardback 1990). Skrev Press published her novels Seaview Terrace (2003) Sucka!(2004) and Break Point (2006) and other shorter work has appeared in Skrev’s magazines.

Her novel Savage To Savvy was an Amazon Breakthrough Novel Award (ABNA) Quarter-Finalist in 2012.