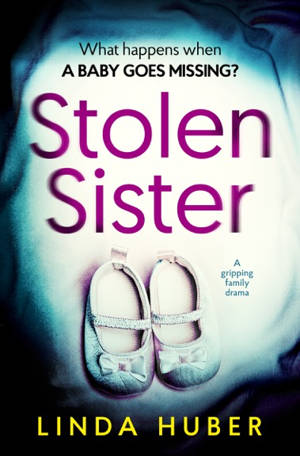 Welcome to my stop on the blog tour for Stolen Sister by Linda Huber. I have a great extract to share with you today. My thanks to Heather from Bloodhound Books for the place on the tour.

What happens when a baby goes missing?

Twenty-two years ago, Erin and Vicky’s parents were killed in an explosion.

Now grown up, Erin and Vicky – who have been separated – are unaware they are siblings. But when Vicky is called to her great-aunt’s deathbed, she learns that she isn’t alone after all.

But where is Erin? Vicky’s search begins…

Elsewhere, Christine has problems of her own. In the first week of her new job, she makes a disturbing discovery, and is struggling to come to terms with impending motherhood.

Vicky is almost ready to give up her search when an old foster mother calls with shocking news.

What links Vicky and Christine?

Will Vicky ever find her sister?

And can Christine’s baby escape the past that befell her mother?

Vicky crept across the room and sank into the chair by the bed, bending towards the slight figure lying there. Maisie was her mother’s aunt, and well over ninety now. They’d had a fabulous party on the big day and Maisie had loved it. She’d never spoken before about something important that Vicky should know. But maybe it was simply the wish to have family with her when she died, and to say and hear ‘I love you’. Fighting back tears, Vicky took the old woman’s hand and squeezed gently. Maisie’s head with its sparse grey hair moved, and she gave a deep sigh.
‘Hello, here I am,’ said Vicky, leaning forward to kiss the papery cheek. It was cool. ‘Can I get you anything, Maisie love?’
Maisie blinked, then gripped Vicky’s hand with surprising strength, though her voice was little more than a whisper behind the oxygen mask. She pulled it away and started again. ‘Vicky – I’m sorry. Sorry I let you go, back then. I wanted to keep you, but–’
‘Hush,’ said Vicky. ‘I know. It’s all right. It was for the best. You couldn’t have taken care of me and Jamie both.’
Maisie closed her eyes and her chest heaved. Vicky’s heart leapt. What should she do if Maisie stopped breathing?
The old woman’s eyes opened again and gazed urgently into Vicky’s. ‘Vicky. There was a baby. You have a little sister. Erin. She was six days old when…’ Her voice tailed off and her eyelids dropped.
Vicky could only sit and gape at her great-aunt. No. Was that even possible? Surely there couldn’t have been a sister too when fate in the form of an explosion had robbed her and Jamie of their parents? She would remember, wouldn’t she? Or someone would have told her. It had all been such a mess… She and Jamie were left with Maisie while Mum and Dad went to a party in England, but Vicky had no recollection of learning about their deaths. Losing your parents was every child’s worst nightmare; she had blanked out a lot. But she’d been four years old – would she really have blanked out a baby sister?
‘Hello, you must be Maisie’s niece. I’m the GP. Alice Peterson.’
Vicky jerked back to here and now. The doctor was a middle-aged woman in a grey trouser suit, and she gave Maisie’s shoulder a pat before shaking hands with Vicky.
‘I’ll have a quick look and then we’ll have a chat.’
Maisie slept – or was she unconscious? – while the doctor examined her, then Vicky followed the other woman into the hallway.
‘Her pulse is very irregular and her breathing is superficial. You know she’s had problems with her heart for years. It’s just her time – I’m sorry.’
The tiny hope she hadn’t admitted to dissolved into nothing and Vicky nodded, pressing cold fingers to her cheeks. ‘Thank you. Will she come round again? She told me something pretty way-out before she dozed off. I really need to ask her about it.’
‘She may just slip away. She’s in no pain, you can be sure of that.’
Vicky’s breath caught. Maisie, please wake up again. Linda grew up in Glasgow, Scotland, but went to work in Switzerland for a year aged twenty-two, and has lived there ever since. Her day jobs have included working as a physiotherapist in hospitals and schools for handicapped children, and teaching English in a medieval castle. Not to mention several years spent as a full-time mum to two boys, a rescue dog, and a large collection of goldfish and guinea pigs.

Her writing career began in the nineties, when she had over fifty feel-good short stories published in women’s magazines. Several years later, she discovered the love of her writing life – psychological suspense fiction. Her first novel was published in 2013, and was followed by eight others. Under her feel-good pen name Melinda Huber, she has also published a charity collection of romantic short stories and a series of feel-good novellas.

After spending large chunks of the current decade moving house, Linda has now settled in a beautiful flat on the banks of Lake Constance in north-east Switzerland, and is working on another suspense novel.