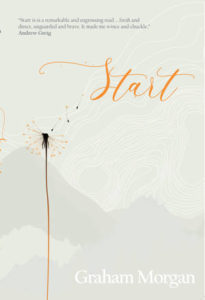 I’m so pleased to be sharing an extract from Start by Graham Morgan with you today. My thanks to Kelly from Love Books Group Tours for the place on the tour.

Graham Morgan has an MBE for services to mental health, and helped to write the Scottish Mental Health (2003) Care and Treatment Act. This is the Act under which he is now detained.
Graham’s story addresses key issues around mental illness, a topic which is very much in the public sphere at the moment. However, it addresses mental illness from a perspective that is not heard frequently: that of those whose illness is so severe that they are subject to the Mental Health Act.
Graham’s is a positive story rooted in the natural world that Graham values greatly, which shows that, even with considerable barriers, people can work and lead responsible and independent lives; albeit with support from friends and mental health professionals. Graham does not gloss over or glamorise mental illness, instead he tries to show, despite the devastating impact mental illness can have both on those with the illness and those that are close to them, that people can live full and positive lives. A final chapter, bringing the reader up to date some years after Graham has been detained again, shows him living a fulfilling and productive life with his new family, coping with the symptoms that he still struggles to accept are an illness, and preparing to address the United Nations later in the year in his new role working with the Mental Welfare Commission for Scotland.

Reviews
Graham Morgan’s START is a remarkable and engrossing read. It buttonholed me and held my attention with its fervour, modesty, wit, self-questioning, its generosity amid corrosive fear, loss and pain.
Andrew Greig, author of Electric Brae, That Summer, Fair Helen

A compelling read, from the beautiful prose, the wonder of the natural world to the depths of despond of living with schizophrenia. The roller coaster of a life laid out on the page for all of us to learn from will enhance any family members, friend or professionals understanding of the journey people take through mental illness.
Ruth Stark MSc, CQSW, MBE – Immediate Past President,
International Federation of Social Work

MAY: UNDERTHINKING WITH WENDY

Your eyes are bluey-grey, your lips give the best kisses, you are the person I want to be with forever and yet, in a year, a month, a second, it may all be different. But just now, being with you is my heaven. Just now is, is, is.

Just now is my worry that I may fall out of love one day, that I may lose my job, that I may not reach that ideal I cannot express and,

I hide under a bush in a dry hollow with crunchy leaves and let the sun dapple me. I distil myself to the very tip of a juniper leaf, the exact end of it. I become the precise centre of a concentric ripple. I become so concentrated that I explode with a sonic boom and shatter the silence of the lochside, our paused breath in bed. I shatter my equanimity, I startle awake clutching you, breathing fast and deeply, laughing a raggedy laugh that says,

‘Where did all that calm go?’

I walk in a glade of bluebells, becoming smaller and smaller until I am the essence of the green sea-like light. I am so happy that I have become so little, so unnoticeable until I notice my happiness, my pride, and then I swell into being and see your disappointed smile at the mud on my shoes, the crushed flowers, the fact that I was so busy being infinitesimal that I forgot to lie down here and kiss you and do that underthinking that forgets what underthinking is.

I sit on a rock and stare at the mountains, sit on a log of driftwood and stare at the silver mist of the sea, feel the breeze on my face. Watch a long-legged spider walk over my shoe, see a butterfly fluttering amongst the dusty heather.

I pause, I breathe so deep. I am the sand, I am the air, I am that mite of dust flying in the sun, and then I’m not: I am working out how I will tell everyone, how I will describe my magical connection with oneness. How I will resurrect that old story of being at sea, thousands of miles from anywhere, and I became as tiny as a salt grain, as big as an atom, as small as the universe.

And here I could swear so foully, if I weren’t brought up not to swear, and I could accuse myself of forgetting what I am trying to do completely. I could think a glass of whisky this evening will cure this arrogance and think of all the ways I pretend to be clever and feel my stomach curl inside me. Hint that the whisky might come early.

I say to myself and berate myself, ‘Deep breaths, soft breaths. Learn to giggle, to play, celebrate those wayward thoughts. Let the frantic thoughts settle like silt in a disturbed puddle that slowly turns clear and peat brown, lit by the amber sun.’ Graham was born in 1963 in York. He went to university as an angst-ridden student and was quickly admitted to one of the old mental asylums, prompting the work he has done for most of his life: helping people with mental illness speak up about their lives and their rights. He has mainly worked in Scotland, where he has lived for the last thirty years, twenty of them in the Highlands. In the course of this work he has been awarded an MBE, made Joint Service User Contributor of the Year by the Royal College of Psychiatrists and, lately, has spoken at the UN about his and other peoples’ experiences of detention. He has a diagnosis of paranoid schizophrenia and has been compulsorily treated under a CTO for the last ten years. He currently lives in Argyll with his partner and her young twins. Start is his first book.