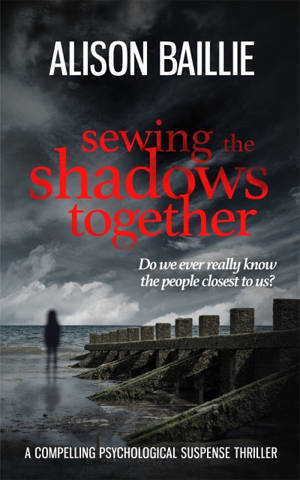 Welcome to my stop on the blog tour for Sewing the Shadows Together by Alison Baillie. I have an extract to share with you today. My thanks to Heather from Bloodhound Books for the place on the tour.

Do we ever really know the people closest to us?

More than thirty years after thirteen-year-old Shona McIver was raped and murdered in Portobello, the seaside suburb of Edinburgh, the crime still casts a shadow over the lives of her brother Tom and her best friend Sarah.

When modern DNA evidence reveals that the wrong man was convicted of the crime, the case is reopened. So who did kill Shona?

Soon Sarah and Tom find themselves caught up in the search for Shona’s murderer, and everyone is a suspect.

The foundations of Sarah’s perfect family life begin to crumble as she realises that nothing is as it appears.

Dark secrets from the past are about to emerge, but can they uncover the truth before the killer strikes again?

I’m alone in the park.  The September moon rises over the Forth and a chill breeze rustles through the branches of the old trees.  I pull my cardigan round my shoulders and feel the rough wood of the bench through my thin skirt.  In the stillness, the water of the burn gurgles through the bushes.  Shona hasn’t come back.  I’m late, I’ll be in trouble.  I feel a mixture of betrayal and fear.  My best friend told me to wait and never came back.

Behind me, a crackle of leaves.  A movement in the shadows, a long black coat, the blur of a white face shining pale in the moonlight.  Logan Baird.  I am breathless with panic.  I try to run but my legs won’t move.

Sarah lay in her bed shaking, her skin clammy. The duvet had slipped off and Rory’s side of the bed lay empty. It was more than thirty years since Logan Baird had murdered Shona, but in that grey void between sleep and consciousness the memories still haunted her.

Tom McIver walked along the empty promenade.  Portobello had not changed much in the last thirty-seven years; the same wide sweep of the bay, the faint distant coastline of Fife and the huge pale sky.  Although it was nearly ten o’clock at night, the daylight was still dissolving slowly into darkness.  He’d forgotten how long the summer evenings were in Scotland; so different from South Africa, where the evening sun sank quickly, the southern hemisphere darkness dropping like a cloak.  He thought briefly of drinking sundowners, watching the sky change colour over Plettenberg Bay, but the image melted and the fishy Scottish air brought him back to the present.

He never thought he’d come back to this place where he’d spent the first sixteen years of his life.  But when his mother clutched his hand and begged him to scatter her ashes on Eriskay, the island of her birth, he’d made the promise to come back to Scotland.  He’d planned to go straight to the Western Isles, but the nearer the trip came, the more he realised he couldn’t avoid Portobello.  He had to come back to confront the memories he’d tried to bury for the whole of his adult life.

The buildings that edged the wide pedestrian walkway were still distinguishable in the grainy evening light; the grim bulk of the Free Presbyterian Church, the red stone of the municipal baths where he’d learnt to swim, the run-down row of cafés and shops.  Then he saw the looming shadow of Brunstane High, his old school, the playground walls topped with broken glass shards.  He shuddered; he was glad the school reunion he’d impulsively signed up for was not being held in this building.

Sooner than he’d expected, he found himself at the more residential end of the prom.  Abercorn Park stretched back from the shore into the darkness, fringed by a row of large, late Victorian villas.  A group of teenagers lounged on the roundabout in the children’s playground.  Behind them, the stark silhouette of the slide stretched up in front of a cluster of old trees and in front of him the waters of the burn disappeared into the dark hole of the culvert which ran under the prom.  He felt a shudder run through him; that was where Shona’s body had been found.

He forced himself to go further and after only a few yards saw the red-stone tenement where his family had lived.  The door at Number 28 was newly-painted, with entry phones replacing the brass bell pulls, but otherwise it seemed almost unchanged.

Looking up to the third floor, he saw the window of his old room and memories of those nightmare days came flooding back: Shona’s empty bedroom, the police questions, the journalists on the doorstep.  His chest tightened.  He couldn’t stand and look any longer.  In the gathering darkness he hurried back to his small room in the Regent Guesthouse and lay down on the floral bedspread.  He’d known it would be hard to come back, but it was even worse than he’d imagined.