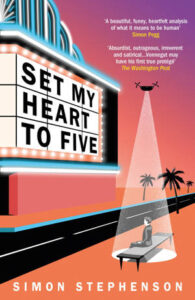 Posted on 9th February 2021 By Nicola

Welcome to my stop on the blog tour for Set My Heart to Five by Simon Stephenson. I have an extract from the book to share with you today. My thanks to Amber Choudhary from Midas PR for asking me to be a part of the tour.

Set in a 2054 where humans have locked themselves out of the internet and Elon Musk has incinerated the moon, Set My Heart To Five is the hilarious yet profoundly moving story of one android’s emotional awakening.

Unhappy with his programmed job of dentistry and inspired by a love of classic movies, Jared sets out on a bold mission: to use the power of his burgeoning feelings to forever change the world for him and all his kind. Unfortunately, Jared intends to do this by writing his own movie, and things do not proceed according to plan…

Unlike anything you have ever read before, Set My Heart To Five is a book for anybody who has feelings, loves movies, and likes to laugh and cry and sometimes do both at the same time. It comes uniquely guaranteed to make its readers weep a minimum of 29mls of tears.*

*Book must be read in controlled laboratory conditions arranged at reader’s own expense. Other terms and conditions may apply to this offer.

My dental practice was in the township of Ypsilanti, in the great state of Michigan.

That made me a Michigander.

Humans from Michigan believe ‘Michigander’ to be a hilarious portmanteau word. Th ey are wrong. A portmanteau combines two words to signify a third thing composed of those constituent parts. ‘Michigander’ would therefore be an excellent portmanteau to describe a male goose from Michigan. But it is an inappropriate term for any human, regardless of their gender or where they come from.

Another collective delusion Michiganders share is a curious belief that the outline of their state resembles a human hand. Consider these contrasting data points:

/Michigan is 250 miles wide vs A human hand is approximately 4 inches wide.

/A human hand has a thumb and 4 fingers vs Michigan has Detroit and over 10,000 lakes.

By any reasonable interpretation of this data, Michigan does not resemble a human hand. Nonetheless, anytime Michiganders wish to demonstrate where a particular place is located in their state, they will invariably hold up their hand and point to a spot on it.

Despite its unfortunate geography, Ypsilanti is a pretty town with a great amount to off er. It is best known as being the home of Eastern Michigan University and its terrible football team, the EMU Eagles. Ypsilaganders nonetheless frequently express civic pride by shouting ‘Go Eagles!’. Th ey even paradoxically shout this in the off season, when the only place the team would realistically be going is on vacation.

Go Eagles – up to the lake!

BTW do not ask me why the team is not called the ‘EMU Emus’. Th at is exactly what I would have named them too.

Yet Ypsilanti boasts many exciting attractions beyond its imperfectly named football team! Surveys have found that people traveling through eastern Michigan will detour up to sixteen miles to visit Ypsilanti’s water tower. Th is is not surprising: male humans are fascinated by objects that resemble penises, and our water tower was once voted the ‘Most Phallic Building in America’.

The inordinate phallic obsession of male humans fascinates me! Perhaps it is because I myself do not have sexual urges.

After all, sexual urges are feelings.

Imagine if bots had sexual feelings and were able to reproduce.

The world would soon be overrun with little toasters!

Ypsilanti’s more family-friendly tourist attraction is the Tridge, a three-pointed crossing at a fork in the River Huron. Unlike ‘Michigander’, ‘Tridge’ is a true portmanteau, appropriately combining portions of the words ‘Triple’ and ‘Bridge’ to denote a structure that connects three points of land over a body of water. Nonetheless, humans do not find the word ‘Tridge’ hilarious in the same way that they do ‘Michigander’. I can only hypothesize that there is something intrinsically hilarious to humans about a male goose but not a bridge.

BTW ‘I cannot’ is a human term I have adopted to put humans at their ease by seeming more human. It is used to express exasperation, but also as shorthand for ‘I strongly disagree’ and ‘This person or species is irrational and therefore irritating to me!’

Of course, the very best thing about Ypsilanti is the world-class dentistry.

Dentistry in Ypsilanti is performed to exactly the same standards maintained everywhere else in the country.

We bots are nothing if not consistent!

My appropriately average dental practice was called ‘Ypsilanti Downtown Dentistry’. It was housed in a small medical building on Main Street. The human I interacted with most frequently there was my assistant, Angela.

Some relevant data points about Angela:

/She loved cats but believed she was allergic to orange ones.

/It is not immunologically possible to be allergic to a specific color of cat.

/That Angela believed that she was allergic to orange cats is what mattered.

Doctoring is an occupation reserved for humans. Bots are considered to make terrible doctors for the same reason we make such excellent dentists: our total lack of empathy. Empathy is so important in a medical doctor that it is even known by another name: ‘bedside manner’. Studies have consistently found that humans prefer ‘bedside manner’ to diagnostic accuracy and treatment efficacy. A sick human would rather have a fellow human misinform them they can be cured, than have a bot accurately state that they will soon surely die a gruesome death!

/He was an excellent doctor by human standards, by which I mean he compensated for his diagnostic shortcomings with a good bedside manner.

/He was not merely a qualified doctor, but also held a minor in Cinema Studies from East Michigan University.

/He enjoyed drinking a Japanese whisky he inexplicably insisted on calling ‘Scotch’.

/He often wished he was not a doctor of humans but a director of films.

/He had a great deal of regret, and also possibly an alcohol problem. So, I’m an author and screenwriter (and once upon a time in a galaxy far, far away I was a medical doctor). I am originally from Edinburgh in Scotland but currently live in Los Angeles, California.

I like all kinds of books and most kinds of movies (except horror, urgh) and love just about everything that has four legs except the chairs in my dentist’s waiting room. My spirit animal is P22, our local friendly neigborhood mountain lion. I have not yet seen him, but I live in daily hope.

My first book, Let Not The Waves Of The Sea’ was a memoir about the loss of my older brother, Dominic, in the Indian Ocean tsunami. The title comes from Khalil Gibran’s book ‘The Prophet’, and a particular passage that resonated with me. People have told me that book is more uplifting than it sounds, but you can of course decide that for yourself if you wish.

My new novel is called ‘Set My Heart To Five’, (that title I made up all by myself!) and it is the story of a dentist android called Jared – a ‘bot’ – who begins to experience feelings. The story unfolds in 2054, in a world where we humans have managed to lock ourselves out of the internet by forgetting the names of our favorite teachers and first pets. It is kind of a love letter to feelings, to the movies many of us grew up on, and the American west. So hopefully there is something for everyone….