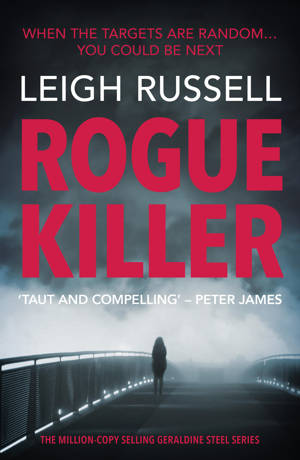 Welcome to my stop on the blog tour for Rogue Killer by Leigh Russell, the 12th in the DI Geraldine Steel series. I have an extract to share with you today. My thanks to Anne Cater from Random Things Tours for the place on the tour.

A man is killed in apparently random attack, and suspicion falls on a gang of muggers. Only Detective Sergeant Geraldine Steel thinks this is the work of a more deliberate murderer.

Two more victims are discovered, after further seemingly indiscriminate attacks. The muggers are tracked down, with tragic consequences. And all the while the killer remains at large. When Geraldine finally manages to track down a witness, she finds her own life is in danger…

For fans of Martina Cole, Mel Sherratt and LJ Ross

The victim had lived in a two-bedroomed terraced house just a short walk from the train station but, for the moment, it was understandable that his widow had chosen to go and stay with a sister in Heslington, a few miles away from the centre of town. Geraldine and Ian drew up outside an old house with a rambling rose growing up one brick wall. In the front garden the leaves of a

gnarled tree bent almost double with age were dotted with waxy magnolia blooms. The idyllic setting was poor recompense for the morbid reason for their visit. They walked carefully along an uneven path to the front door which was opened almost at once by a harassed-looking woman. Still holding the edge of the door, she brushed an untidy strand of

hair off her face with the back of her free hand.

The woman frowned. ‘What is it you want? Only I’m sorry, I’m very busy right now –’

For answer they displayed their identity cards, and she screwed up her eyes to scrutinise them, her face twisting in a frown at the sound of a small child wailing in the house behind

‘This really isn’t a good time –’ she began again.

‘Please, Mrs Jamieson,’ Geraldine said gently, ‘we really do need to speak to your sister, if she’s here. We won’t keep her long.’

The woman drew in a deep shuddering breath and shook her head. ‘Well, you’d best come in then. You can speak to her, but I doubt you’ll get much sense out of her. She’s in a real state, which is hardly surprising. And I don’t suppose you pestering her is going to help any.’

She led them into a front room where a dining table was littered with torn wrapping paper and toys, birthday cards and cake crumbs, and half eaten chocolate fingers.

‘It was my youngest son’s birthday yesterday,’ she said apologetically. ‘We decided to go ahead, even though… The children don’t understand what’s happened, and anyway it was

too late to cancel everyone.’

She shrugged, embarrassed at having held a party on the day her brother-in-law’s body had been discovered. Somewhere in the house a child could be heard whining.

She left the room and returned a few moments later with another woman trailing behind her.

‘Ellie, these are the police officers I just told you about. I’m sorry,’ she added, with an anxious glance at Geraldine, ‘but I’d better go and see to my daughter before she gets hysterical.’

She withdrew, leaving her sister standing in the doorway. Slim and fair-haired, she would have been pretty had her face not been blotchy, her pale blue eyes swollen from crying.

‘Come and sit down, Ellie.’

her invitation, doing her best to speak firmly yet kindly.

‘Ellie, we need to ask you a few questions,’ Ian said.

At her husband’s name, the widow started and her eyes travelled uneasily from Geraldine to Ian and back again.

‘You can’t speak to Grant,’ she said, her voice barely louder than a whisper. ‘Grant is dead.’ She began to shake, and tears slid down her cheeks. ‘He’s dead,’ she repeated in a shaky

‘We’re so sorry,’ Geraldine said. ‘We’re sure you’d like to

Ellie shuffled forwards into the room. Taking a seat, she stared at the table.

‘I can’t help you,’ she said in a flat voice. ‘I wasn’t there. No one was there.’ She raised one hand to her lips, stifling a sob. ‘He was all by himself when…’ Unable to control herself any longer, she broke down in tears, covering her face in her hands. ‘He was a good man,’ she mumbled through her fingers. ‘What kind of monster would do something like that?’ Lowering her

hands, she glared at Geraldine, her eyes hardening with anger. ‘Find out who did it. I want to look Grant’s killer in the eye and – and –’ Her emotions overwhelmed her again and she put her head in her hands and sobbed, rocking backwards and forwards on her chair.

Ian glanced helplessly at Geraldine, and they waited until

‘Ellie,’ Geraldine said, ‘can you think of anyone who might have wanted to harm your husband?’

‘No,’ came the muffled response.

‘Had he fallen out with anyone?’

Ellie’s head jerked up and her red-rimmed eyes widened in surprise. ‘What are you talking about?’ She hiccupped. ‘I thought – that is, they said – they told me he was mugged.’

‘So why are you asking about people arguing with him, wanting to harm him? I don’t understand. Are you saying…What are you saying, exactly?’ Her expression of surprise switched to anger, and her voice hardened with suspicion. ‘Tell me what you mean.’

Geraldine spoke slowly. ‘We’re exploring the possibility that your husband’s death may have been the result of a deliberate attempt on his life.’

‘Deliberate? I don’t know what you mean. Are you telling me Grant was murdered?’

‘At this stage in our investigation we have to pursue every line of enquiry.’

Geraldine was aware that she was being evasive, but she was reluctant to say anything that might start the widow crying again. She didn’t want to cause her any unnecessary distress, but they couldn’t shy away from the truth indefinitely. Leigh Russell is the author of the internationally bestselling Geraldine Steel sries: Cut Short, Road Closed, Dead End, Death Bed, Stop Dead, Fatal Act, Killer Plan, Murder Ring, Deadly Alibi, Class Murder and Death Rope. The series has sold over a million copies worldwide. Cut Short was shortlisted for the Crime Writers Association (CWA) John Creasey New Blood Dagger Award, and Leigh has been longlisted for the CWA Dagger in the Library Award. Her books have been #1 on Amazon Kindle and iTunes with Stop Dead and Murder Ring selected as finalists for The People’s Book Prize. Leigh is chair of the
CWA’s Debut Dagger Award judging panel and is a Royal Literary Fellow. Leigh studied at the University of Kent, gaining a Masters degree in English and American Literature. She is married with two daughters and a granddaughter, and lives in London.