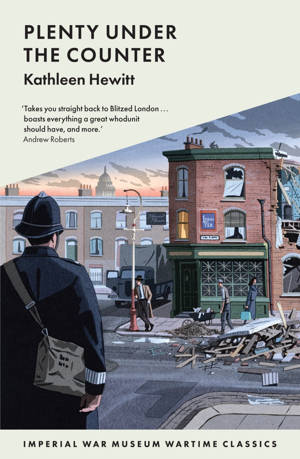 I’m so pleased to be taking part in the blog tour for Plenty Under the Counter by Kathleen Hewitt. My thanks to Anne Cater from Random Things Tours for the place on the tour. In fact, this is one of four out of print wartime classics that has been republished by the Imperial War Museum. Before I share an extract from Plenty Under the Counter, here’s some information about all of the books.

IMPERIAL WAR MUSEUMS LAUNCH FIRST
WARTIME CLASSICS SERIES
Alexander Baron, David Piper, Anthony Quayle, Kathleen Hewitt
Published on 26 September 2019
#WartimeClassics
£8.99 each
“If poetry was the supreme literary form of the First World War then, as if in riposte, in the Second World War, the English novel came of age. This wonderful series is an exemplary reminder of that fact. Great novels were written about the Second World War and we should not forget them.”
WILLIAM BOYD

‘It’s wonderful to see these four books given a new lease of life because all of them are classic novels from the Second World War written by those who were there, experienced the fear, anguish, pain and excitement first-hand and whose writings really do shine an incredibly vivid light onto what it was like to live and fight through that terrible conflict.’
JAMES HOLLAND, Historian, author and TV Presenter

Originally published to considerable acclaim, these titles were written either during or just after the Second World War and are currently out of print. Each novel is written directly from the author’s own experience and takes the reader right into the heart of the conflict. They all capture the awful absurdity of war and the trauma and chaos of battle as well as some of the fierce loyalties and black humour that can emerge in extraordinary circumstances.

Living through a time of great upheaval, as we are today, each wartime story brings the reality of war alive in a vivid and profoundly moving way and is a timely reminder of what the previous generations experienced.

The remarkable IWM Library has an outstanding literary collection and was an integral part of Imperial War Museums from its very beginnings. Alan Jeffreys, (Senior Curator, Second World War, Imperial War Museums) searched the library collection to come up with these four launch titles, all of which deserve a new and wider audience. He has written an introduction to each novel that sets them in context and gives the wider historical background and says, ‘Researching the Wartime Classics has been one of the most enjoyable projects I’ve worked on in my years at IWM. It’s been very exciting rediscovering these fantastic novels and helping to bring them to the wider readership they so deserve’.

Each story speaks strongly to IWM’s remit to tell the stories of those who experienced conflict first hand. They cover diverse fronts and topics – preparations for D-Day and the advance into Normandy; the war in Malaya; London during the Blitz and SOE operations in occupied Europe and each author – three men and a woman – all have fascinating back stories. These are Second World War novels about the truth of war written by those who were actually there.

Imperial War Museum Wartime Classics will all be on sale Thursday 26 September 2019; cost £8.99 paperback.
The Four titles are:
From the City, From the Plough by Alexander Baron – A vivid and moving account of preparations for DDay and the advance into Normandy. Published in the 75th anniversary year of the D-Day landings, this is based on the author’s first-hand experience of D-Day and has been described by Antony Beevor as ‘undoubtedly one of the very greatest British novels of the Second World War.’

Alexander Baron was a widely acclaimed author and screenwriter and his London novels have a wide following. This was his first novel.

Trial by Battle by David Piper – A quietly shattering and searingly authentic depiction of the claustrophobia of jungle warfare in Malaya described by William Boyd as ‘A tremendous rediscovery of a brilliant novel.

Extremely well-written, its effects are both sophisticated and visceral. Remarkable’, and VS Naipaul as ‘one of the most absorbing and painful books about jungle warfare that I have read’ and by Frank Kermode as ‘probably the best English novel to come out of the Second World War.’

David Piper was best known as director of the National Portrait Gallery, the Fitzwilliam Museum in Cambridge and the Ashmolean Museum in Oxford. The novel is based on his time serving with the Indian Army in Malaya where he was captured by the Japanese and spent three years as a POW. His son, Tom Piper, was the designer of the hugely successful Blood Swept Lands and Seas of Red installation of ceramic poppies at the Tower of London to commemorate the First World War Centenary.

Eight Hours from England by Anthony Quayle – A candid account of SOE operations in occupied Europe described by Andrew Roberts as ‘As well as being one of our greatest actors, Anthony Quayle was an intrepid war hero and his autobiographical novel is one of the greatest adventure stories of the Second World War.

Beautifully written and full of pathos and authenticity, it brings alive the terrible moral decisions that have to be taken by soldiers under unimaginable pressures in wartime.’

Anthony Quayle was a renowned Shakespearean actor, director and film star and during the Second World War was a Special Operations Executive behind enemy lines in Albania.

Plenty Under the Counter by Kathleen Hewitt – a murder mystery about opportunism and the black market set against the backdrop of London during the Blitz. ‘With a dead body on the first page and a debonair RAF pilot as the sleuth, this stylish whodunit takes you straight back to Blitzed London and murder most foul.

Several plausible suspects, a femme fatale, witty dialogue, memorable scenes and unexpected twists – it boasts everything a great whodunit should have, and more. Andrew Roberts.

Kathleen Hewitt was a British author and playwright who wrote more than 20 novels in her lifetime. She was part of an artistic set in 1930’s London which included Olga Lehman and the poet Roy Campbell.

IWM (Imperial War Museums) tells the story of people who have lived, fought and died in conflicts involving Britain and the Commonwealth since the First World War.

Our unique collections, made up of the everyday and the exceptional, reveal stories of people, places, ideas and events. Using these, we tell vivid personal stories and create powerful physical experiences across our five museums that reflect the realities of war as both a destructive and creative force. We challenge people to look at conflict from different perspectives, enriching their understanding of the causes, course and consequences of war and its impact on people’s lives.

I love that these books have been given a new lease of life. Here’s that promised extract from Plenty Under the Counter:

He’d like to solve this queer murder… Half automatically, he walked back past Mrs. Meake’s and turned again into Cannock Road, thence into the alley that led to the garage. Only a crescent of moon relieved the black-out, there was a slight ground mist, the neighbourhood was silent at this time of night.

He walked down the alley and stood outside the garage, wondering what secrets it might hide. Schenk, the owner, was in prison. Thelma his employee, was hobnobbing with a man who carried goods from this garage to a black market shop. And that man, so like the victim of Sunday night’s crime, had been weeping in the ‘Mango Grove’…

Idly, David tried the garage door. It did not yield; he had hardly expected that it would.

Retracing his steps, he heard a faint rustle behind him. Like a step on stray leaves. He stopped, a sense of impending danger tingling the roots of his hair. Again silence – an eerie silence – surrounded him. The quietness of open spaces is a natural thing; quietness in the heart of a great city is somehow sinister, like the stillness of some powerful and dangerous beast that may stir suddenly and savagely to life.

He moved on a few paces, wondering whether his tensed nerves were responsible for the renewed suspicion that he was being dogged. Again he stopped. He’d been right, he wasn’t alone…

And then something struck him. That was all he could remember as consciousness returned. That something heavy had cracked the side of his head as he turned. He had the very devil of a headache, and as he tried to rise he staggered. His fingers, going automatically to the side of his forehead, touched something warm and gummy. With the back of his hand he wiped the blood that trickled over one eye.

He managed to get to his feet, reeling slightly as he progressed a few steps. The wall was a help, he steered himself by it, and once in Cannock Road he was able to cover the familiar stretch of pavement round the corner to Mrs. Meake’s. He felt that all he wanted to do was to lay his head on a cool pillow and sink back into unconsciousness.

He was still too dazed to feel anger.

Somehow he unlocked the front door. Closing it, he fumbled for the light switch, and then he had to pause to rally his senses. It was while he was standing there, at the foot of the stairs that the door opened again.

Dimly, he saw the German doctor who had a room on the second floor. Hauptmann…

Hauptmann was at his side in a moment. For some reason that he could not have defined, David gave evasive answers to the questions rapidly fired in guttural broken

‘I had a few drinks,’ he muttered. ‘I cracked my head against a wall. No fuss. For heaven’s sake, no fuss.’

Hauptmann was guiding him upstairs, uttering solicitous noises. The wound must be sterilised, bandaged. Hauptmann would attend to it. David put up no resistance; he was in Hauptmann’s room wincing as the cut on his head was cleansed. Fortunately it was neither extensive nor deep, and being near the roots of his hair would not be too apparent. He did not want to have to answer a lot of questions about it. The pain of the bruise extended further, over the whole of the left of his head.

The attack, David brooded silently, was the direct result of his curiosity about the garage. But to what extent-if at all-could the secrets of the garage throw light upon the murder done within a few yards of where his unseen assailant had slugged him?