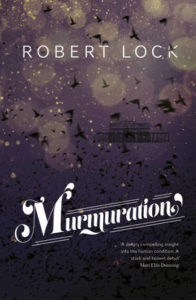 First of all, I’d like to say a very Happy Publication Day to Robert Lock! This is a book that I so wish I could have fitted in a read of as it sounds right up my street but unfortunately time didn’t allow it, so instead I’m sharing an extract from the beginning of the book with you today. My thanks to Legend Press for the place on the tour.

Perfect for fans of Generation Game, Cloud Atlas and Behind the Scenes at the Museum.

The starlings dance in mesmerising patterns. In and out they fold. Up and down. Below them a Victorian pier has stood the test of time, carrying each generation over a cold and relentless sea.

As the birds dance they watch the lives of those who pass beneath. Two scandalous comedians born a century apart; a seemingly ageless deckchair attendant; the fortune-teller who believes no one can see the future. And in this seaside town one man knows the only way to stop history repeating itself is to solve a mystery as old as the pier.

Look! There he stands, scarlet frock coat flapping in the breeze, a circus ringmaster balanced, improbably, on top of the promenade railing. In one white-gloved hand his top hat continues the line of his outstretched arm as he gesticulates towards the birds now gathering on the pier theatre roof, while with the other he beckons to his audience, drawing them in.

“Roll up!” he hollers again, moustache flexing. “See the artistry of nature displayed for your delectation and delight! Take your seats for the greatest show in town! Never the same performance two nights running! A miraculous demonstration of timing and synchronisation in such numbers as to take your breath away! Watch these masters of the air as they perform their mysterious dance only inches from disaster!”

But is this merely circus ballyhoo designed to lure the gullible? Indeed it is not. Not here, not as a mauve-coloured dusk settles on the resort, like the house lights dimming. The birds assemble in their hundreds, their thousands, and the wind quietens, for it feels something akin to love towards the starlings. There is something of the wind made visible in what the starlings do.

They come, until the theatre’s white roof is black with them, drawn irresistibly to this priapic statement of Victorian engineering. But is it merely instinct that calls them? And why the pier? The town possesses any number of edifices that would suit their purpose just as well, so why do the starlings choose the pier? Perhaps it is simply easier to target from the air, a bold exclamation mark standing out from the resort’s jumble of rooftops. Perhaps the clear air around the pier affords the birds a broader canvas on which to work. Or maybe it is simply that they recognise the resort’s heart, its defining venue, and know their nightly show deserves top billing.

Then, as though on some secret signal, the birds take off. For a moment there seems only chaos, a dark explosion above the theatre, but within seconds the starlings settle into their shifting cloud: the murmuration. Could there be a more appropriate noun? What better word is there to describe the sound of an audience as the curtain rises on a much-anticipated performance? Whoever coined it had a poet’s touch.

Up, down, back and forth, changes of direction and rhythm as perfectly orchestrated and paced as the finest symphony. Yet the display’s most astonishing fact is that it weaves this magic from nothing more than thousands of birds flying wingtip to wingtip. Are there leaders amongst the flock, dictating its course? Maybe the movements are externally driven, either by subtle atmospheric changes or magnetic fields. And whatever their motivation, how do the birds on each manoeuvre’s outer edge know that they must fly slightly faster than those in its centre? Because there is never a collision, or a moment’s hesitation; the starlings dance, impeccably, for perhaps half an hour, before scattering to their roosts across the resort, returned to the individual scraps of black which no one deems worthy of a second glance. It is like the dismantling of some kinetic sculpture by its dissatisfied artist, who flings the fragments to their studio’s furthest corners, where they will lie until tomorrow’s twilight brings them together once again.

No one will squabble with the ringmaster now, demanding their money back. They have seen the greatest show in town, that much is certain. In fact they are slightly embarrassed by their former cynicism. Yes, they heeded his call, because humankind has a fondness for showmen which does not necessitate a belief in their claims, but, in all honesty, they were not expecting much. What can a few birds achieve, after all? And then, as the starlings began to shapeshift above them, a silence settled on the crowd which reflected a different form of disbelief, one born out of enchantment. There is little room for magic in this tumultuous modern world — it requires quiessence and humility — so when it does manifest itself the contemporary mind tends to over-analyse the spell being cast. You can see the questions in their upturned faces: how can so many thousands of individuals act in such concord, with such beauty? What allows them to subsume their own needs and desires for the sake of this hypnotic display? And to what purpose?

A small, dark-haired boy watches the birds and tries to visualise what they are seeing. He imagines it must be similar to the thrilling disorientation of a rollercoaster, all tilting horizons and surging undulations, but a child’s imagination, for all its strengths, tends to the anthropomorphic. The starlings are born to fly, so their eyes are perfectly attuned to spatial freedom. If only the boy could glimpse, even for a moment, what the birds see. Because the murmuration is a collective not only in flight, but also in vision. Robert began a degree in Applied Biology but decided science wasn’t for him. He worked in Paris and then as a tour director taking US students round Europe. He also began freelance photography and writing this novel. The novel is based on a seaside resort populated with characters he met over the years, through his job at the local newspaper. The title Murmuration is inspired from watching the starlings dance over and around North Pier.