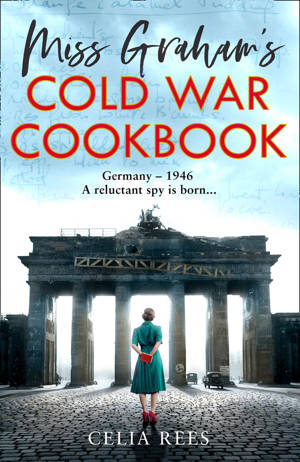 I’m delighted to be taking part in the blog tour for Miss Graham’s Cold War Cookbook by Celia Rees today. I have an extract to share with you. I love the sound of this book but just couldn’t fit in a read of it, unfortunately. My thanks to Anne Cater of Random Things Tours for the place on the tour.

An ordinary woman. A book of recipes. The perfect cover for spying…

Sent to Germany in the chaotic aftermath of World War II, Edith Graham is finally
getting the chance to do her bit. Having taught at a girls’ school during the conflict,
she leaps at the opportunity to escape an ordinary life – but Edith is not everything
she seems to be.

Under the guise of her innocent cover story, Edith has been recruited to root out
Nazis who are trying to escape prosecution. Secretly, she is sending coding messages
back to the UK, hidden inside innocuous recipes sent to a friend – after all, who
would expect notes on sauerkraut to contain the clues that would crack a criminal
underground network?

But the closer she gets to the truth, the muddier the line becomes between good and
evil. In a dangerous world of shifting loyalties, when the enemy wears the face of a
friend, who do you trust?

Perch fillets dipped in egg, then flour, salted and peppered with a hint of paprika, fried in butter . . . Speciality of the place. A finicky fish – hardly worth eating – bones like needles. Tastes of the riverbed.

She put down her pen and pushed her plate away. She wasn’t here to eat the food or drink the wine. She had no appetite anyway. She’d come by way of Natzweiler-Struthof, a Nazi camp two hundred miles north of here. A Nacht und Nebel place, Night and Fog. Apt name. Four British girls had died there, forgotten by almost everybody, tucked away in the back pocket of a secret war.

She’d laid four red roses in the black maw of the rusting oven. A pilgrimage of sorts.

They had not died well.

A ragged cheer burst from the kitchen. Through the flapping doors, she could see white-coated backs in front of a portable television. From the foyer, tinny, muffled commentary, crowd noise, clinking and chanting, mixed with the excited chatter of guests and staff clustered round a larger screen, drawn by the need to witness the drama taking place in Berlin, history erupting into the present, breaking through the muted formality of this grand hotel. An ending? A beginning? Both? Impossible to tell.

Not that it mattered. Very little mattered anymore.

‘Are you finished, Madame?’ The elderly waiter hesitated before taking her plate. ‘The dish not to your liking?’

‘I’m not hungry.’ She capped her pen and lit a cigarette.

‘You have been here before?’ He asked as he refilled her glass. A Chasselas. Swiss wine, none the worse for that.

Just after the war. She doubted he would remember. How many people did he encounter? She’d been here under another name. A different person. A different time. She remembered him, though. His name was Joseph. She had a good memory for faces. She’d needed it in her line of business. A slender, solemn, graceful young man then, dark, thin-faced, with a pencil moustache. His hair silver now, the moustache still there – a thin line sketched in graphite. French, she recalled, and Jewish. He’d found safety here in Switzerland. She wondered if his family had been as lucky.

‘Anything else for you, madame? A little dessert, perhaps? Coffee?’

‘No, thank you.’ She knocked the glass, her hand suddenly as useless as a bat. Wine spilled across the table. Joseph sprang forward to repair the damage. ‘No need.’ She shook her head. ‘Clumsy of me.’

She held her hands on her lap and looked around at the immaculately laid tables, the stiff, starched linen, the gleam of the heavy silver cutlery, the glittering glassware, her fellow diners. Some of them frail, in wheelchairs, she noted, the staff must be used to different degrees of infirmity. She pushed herself back from the table. Anticipating that she was about to leave, Joseph was immediately at her side, whisking her chair away, offering her his arm.

She declined his help and made her way slowly, Joseph hurrying in front of her, nodding to two young waiters to open the double doors. He bowed as she left. She smiled her thanks and wished him farewell. This was the last time she would be eating here, or anywhere. In a little less than twenty-four hours, Stella Snelling, restaurant critic and cookery writer, acclaimed and feared in equal measure, would be no more. Celia Rees was born in Solihull, West Midlands, UK. She studied History and Politics at Warwick University and has a master’s degree from Birmingham University. She taught
English in city comprehensive schools for seventeen years before beginning her writing career. She is the author of over twenty acclaimed books for young adults and has won various prizes both in Britain and abroad. Her work has been translated into twenty-eight languages. Celia lives in Leamington Spa, Warwickshire, with her husband.