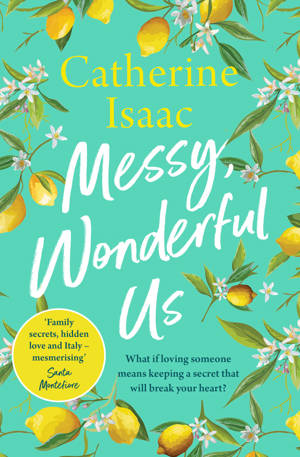 I’m so pleased to be able to share an extract from Messy, Wonderful Us by Catherine Isaac today as part of the blog tour. My thanks to Megan Denholm from ED PR for asking me to be a part of the tour and Simon & Schuster for sending me a copy of the book. It sounds gorgeous.

One morning in early summer, a man and woman wait to board a flight to Italy…

Allie has lived a careful, focused existence. But now she has unexpectedly taken leave from her job as an academic research scientist to fly to a place she only recently heard about in a letter. Her father, Joe, doesn’t know the reason for her trip, and Allie can’t bring herself to tell him that she’s flying to Italy to unpick the truth about what her mother did all those years ago.

Beside her is her best friend since schooldays, Ed. He has just shocked everyone with a sudden separation from his wife, Julia. Allie hopes that a break will help him open up.

But the secrets that emerge as the sun beats down on Lake Garda and Liguria don’t merely concern her family’s tangled past. And the two friends are forced to confront questions about their own life-long relationship that are impossible to resolve.

The dazzling new novel from Richard & Judy book club author Catherine Isaac, Messy, Wonderful Us is a story about the transforming power of love, as one woman journeys to uncover the past and reshape her future.

‘Messy Wonderful Us’ by Catherine Isaac is out now, published by Simon & Schuster, priced £7.99 in paperback original.

I want to leave the clothes as neatly as I found them, so I remove the pile to refold each item. But when I attempt to straighten the drawer liner, I realise there’s something underneath. I slide my fingernail under the edge and carefully lift it up. It’s then that I find the envelope.

It’s dry and faded with age, ripped open at the top. I don’t know what it is exactly that compels me to pick it up, slide out the letter and unfold it, carefully unfurling the old newspaper page concealed inside. I do it almost without thinking, stroking my fingers against the grey print before I can even contemplate the ethics of my intrusion.

It’s the date that I register first – 11 June 1983 – before I cast my gaze over a spread of pictures from a summer party held at Allerton People’s Hall to celebrate its centenary. There are two rows of photographs, some of austere- looking men in cricket whites, others of women in pleated skirts and batwing sleeves. There are teenage boys in Ray- Bans and polo shirts with popped- up collars, girls in crop tops and lace, looking sticky under the dying heat of the day. Then I spot the name on one caption: Christine Culpepper.

When my eyes settle on my mother’s face, at first I don’t think beyond the tug in my chest, a jolt of something sad and indefinable. But as I take in each detail, a creeping realisation begins to take hold. Something doesn’t add up.

My mother is holding hands with a young man I don’t know, someone I’ve never even seen before. Her mouth is curled up in a mysterious smile and teenage infatuation shines brightly in her eyes. The name of this unknown person, according to the caption, is Stefano McCourt. He looks to be older than my mother by a couple of years and has dark eyes, a full mouth and a gap in his teeth. I look at the date again, trying to reconcile each contradictory detail, but one in particular: the photo was taken nine months before I was born.

‘Five minutes until dinner,’ I hear Dad shout from downstairs. I don’t answer, ignoring the rapid thudding in my chest as I turn my attention to the handwritten letter. It is addressed to my Grandma Peggy and dated December 1983. There’s no address from the sender.

I write to respectfully ask you not to contact Stefano, myself, or my husband Michael again via his office at the Museo di Castelvecchio.

While I understand that you are in shock about Christine and Stefano – we all are – no good can come of us continuing to maintain contact. I am particularly upset about you writing to my son about his supposed responsibilities to his ‘flesh and blood’. This kind of emotional blackmail is very wrong when he already made his decision not to have anything more to do with your daughter before our family left Liverpool. The fact that he moved back to Italy with us should have made thisvery clear.

From what you said in your letter, Christine has now made amends with her boyfriend. He will no doubt make a good father to the baby. So why rock the boat by trying to bring Stefano back into the equation when nobody needs to know the truth?

He is not going to change his mind and he has absolutely no intention of returning to the UK. I am deeply sorry if this sounds harsh under the circumstances, but I’m sure you appreciate that it is not just you who has been upset by events.

I look again at the photograph on the newspaper cutting. At the date. At my mother’s enraptured smile. But most of all, I am drawn to the young man with dark hair and a gap in his teeth that’s so identical to my own that it makes my breath catch in my throat. Catherine Isaac was born in Liverpool and was a journalist for many years before she wrote her first book, Bridesmaids, under the pseudonym Jane Costello. She wrote nine novels under that name – all bestsellers – before You Me Everything was published under the name Catherine Isaac in 2018. It was selected by the Richard & Judy Book Club, has been translated into 24 languages and a movie is in development by Lionsgate and Temple Hill. In 2019 she won the Romantic Novelists’ Association award for Popular Romantic Fiction. She lives in Liverpool with her husband and three sons.