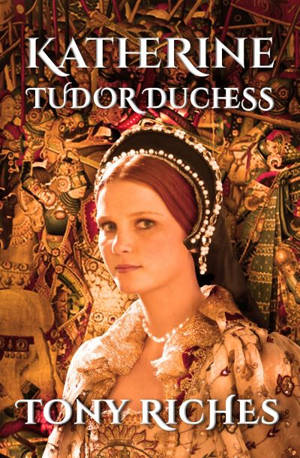 I have a fabulous extract from Katherine Tudor Duchess by Tony Riches to share with you today along with the chance to win a paperback copy of the book. My thanks to Amy Bruno from Historical Fiction Virtual Book Tours for the place on the tour.

Attractive, wealthy and influential, Katherine Willoughby is one of the most unusual ladies of the Tudor court. A favourite of King Henry VIII, Katherine knows all his six wives, his daughters Mary and Elizabeth, and his son Edward, as well as being related by marriage to Lady Jane Grey.

She marries Tudor knight, Sir Charles Brandon, and becomes Duchess of Suffolk at the age of fourteen. Her Spanish mother, Maria de Salinas, is Queen Catherine of Aragon’s lady in waiting, so it is a challenging time for them all when King Henry marries the enigmatic Anne Boleyn.

Following Anne’s dramatic downfall, the short reign of young Catherine Howard, and the tragic death of Jane Seymour, Katherine’s young sons are tutored with the future king, Prince Edward, and become his friends.

Katherine and Charles Brandon are chosen to welcome Anna of Cleves as she arrives in England. When the royal marriage is annulled, Katherine’s good friend, Catherine Parr becomes the king’s sixth wife, and they work to promote religious reform.

When King Edward dies, his Catholic sister Mary is crowned queen and Katherine’s Protestant faith puts her family in great danger – from which there seems no escape.

Katherine’s remarkable true story continues the epic tale of the rise of the Tudors, which began with the best-selling Tudor trilogy and concludes with the reign of Queen Elizabeth I.

Katherine stared at her mother in disbelief, her mind struggling to make sense of the king’s decision. There had been no warning, no discussion. Her life was to change forever, yet she’d not even been asked. Does she not love me? Does she not care what happens to me? The thought made her defiant.

‘What will happen if I refuse?’

The smile vanished from her mother’s face and her dark eyes flashed with rare annoyance. ‘You are a ward of the Crown, Katherine. You cannot disobey the King of England.’ As always, she pronounced king as keeng, her Spanish heritage winning through even after all the years in England. ‘Westhorpe is not so far away. I shall visit you as often as I can.’

Katherine paced the great hall as she tried to think, the hem of her azure silk gown swishing on the tiles her late father had imported from France. She stopped when she reached his high-backed chair and ran her hand over the carved arm. The wood felt smooth from years of use.

The leather seat still held the round shape of him, as if he’d been sitting there only that morning. Troubled thoughts raced through her mind. Father would never have sent me away. Mother wants to be rid of me. All she truly cares for is the queen. She looked up at her mother.

‘I don’t want to leave Parham Hall. It’s my home. I was born here.’ Her eyes rose to the bright sunlight sparkling through the diamond-shaped leaded glass of the windows. She choked back her tears. She’d known this day would come, yet had not thought it would be so soon.

Her mother gestured for her to sit. The grand hall echoed to the hammerbeam roof at the screech of the heavy chair as it scraped on the tiles. Katherine arranged the folds of her gown with unnecessary care and avoided her mother’s gaze, knowing what was to come.

‘When I was eleven, only two years older than you are now, I had to leave my home – and my parents.’ She gave Katherine a wistful glance. ‘We boarded a fine ship from Laredo, bound for England—’

‘Forgive me, Mother. I’ve heard that story many times.’

Her mother should have admonished her for her rudeness but was lost in old memories. Katherine grew up with tales of how her mother became lady-in-waiting to Queen Catherine of Aragon. Their ship foundered in a fearsome storm and they were forced to return, only to set sail again the next month. Her mother never saw her parents again.

‘Your father was the first Englishman of note I’d ever seen. He was chosen as the king’s representative.’ Her mother smiled with pride at the memory. ‘He could speak no Spanish, and my English was poor, yet we understood each other from that first moment.’

Katherine studied the oak table in front of her as she listened to the familiar story. A dark knot in the polished wood seemed to stare back at her like an unblinking eye. Two years had passed since her father’s death. Her memory of him had faded, like a tapestry left too long in the sunlight, yet her mother still grieved. She spoke of him every day, as if he’d ridden off on another progress with the king and might return any day.

‘You should consider yourself fortunate to be chosen by the duke as his ward.’

The edge to her mother’s tone made Katherine look up. Her mind had been wandering again, as it always did when her mother lectured her. The Duke of Suffolk is a great bearded giant of a man who towers over me. He was a good friend to Father. Mother seems in awe of him, one of the few men at court she speaks well of.

Katherine had been presented to the duke and his family at a banquet the previous midsummer’s eve. Lady Mary and her daughters made quite an impression. She’d never seen such glittering jewels and fine silk gowns. Her mother said the duke was always in debt, but she supposed Lady Mary had her own fortune. She was the king’s sister, the French queen.

Katherine frowned as a thought occurred to her. ‘I’m not an orphan. I’m happy here and I have you to look after me. I have no need—’

Her mother held up a gold-ringed hand to silence her. ‘Think of your future, Katherine. My duty is to the service of our queen. You must learn to manage a household of your own. Who better to teach you than the sister of the king, who was once Queen of France?’

‘I like Lady Mary,’ Katherine’s slender fingers went to the silver crucifix she wore on a fine chain around her neck. ‘She sent me this as a New Year’s gift.’

Her mother smiled. ‘Her daughters, Frances and Eleanor, will be company for you, and although he’s not said so yet, I expect the duke sees you as a future bride for his son.’

‘Little Henry?’ Katherine failed to keep the scorn from her voice as she remembered the spoiled child at the midsummer’s eve banquet.

‘Henry Brandon is the king’s nephew and has been made Earl of Lincoln. At least he is young.’

Her mother gave her a despairing glance. ‘You must curb your sharp tongue, Katherine. It must be your Spanish blood.’ She shook her head. ‘Young Henry is in the line of succession, so he might one day become king – and his wife the Queen of England.’

‘I have no wish to become Queen of England.’ She’d heard enough from her mother about the hardship Queen Catherine endured with such grace.

‘Well, think of your inheritance. The duke will protect you from the ambitions of your uncle.’

Katherine could never understand why her father’s brother, Sir Christopher Willoughby, believed he was entitled to her lands. His claims distress Mother, but the duke will deal with Uncle Christopher. The thought of the duke as her protector confused her. Is he not also after my inheritance?

‘If you will excuse me, Mother, I should like to pray for guidance.’ Her mother could only approve.

‘Of course, Katherine – and think well on what I’ve told you. This is an opportunity most girls of your age can only dream of.’

During the Blog Tour, we are giving away two paperbacks of Katherine-Tudor Duchess by Tony Riches! To enter, please use the Gleam form below.
Giveaway Rules
– Giveaway ends at 11:59 pm EST on December 6th. You must be 18 or older to enter.
– Paperback giveaway is open internationally.
– Only one entry per household.
– All giveaway entrants agree to be honest and not cheat the systems; any suspicion of fraud will be decided upon by blog/site owner and the sponsor, and entrants may be disqualified at our discretion.
– The winner has 48 hours to claim prize or a new winner is chosen. Tony Riches is a full-time writer and lives with his wife in Pembrokeshire, West Wales. After several successful non-fiction books, Tony turned to novel writing and wrote ‘Queen Sacrifice’, set in 10th century Wales, followed by ‘The Shell’, a thriller set in present day Kenya. A specialist in the history of the early Tudors, he is best known for his Tudor Trilogy. Tony’s other international best sellers include ‘Warwick ~ The Man Behind the Wars of the Roses’ and ‘The Secret Diary of Eleanor Cobham’.