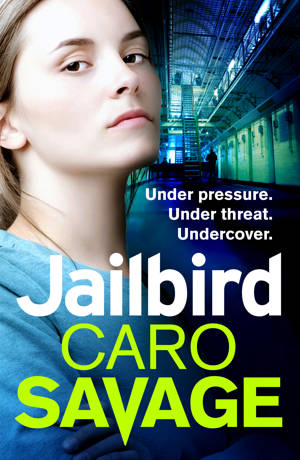 Welcome to my stop on the blog tour for Jailbird by Caro Savage. I’m so pleased to have a fabulous extract to share with you today. My thanks to Megan from Boldwood for the place on the tour.

Under pressure.
Under threat.
Undercover.

When you’re working undercover the smallest mistake can cost you your life.

Detective Constable Bailey Morgan has been out of the undercover game since her last job went horribly wrong, leaving her with scars inside and out.
When her colleague Alice is found dead whilst working deep cover in a women’s prison, Bailey steps in to replace her.

Working alone, Bailey embarks on a dangerous journey through the murky underbelly of the prison and soon discovers that Alice’s death was part of a spate of brutal murders.

Surrounded by prison officers, criminals and lowlifes, the slightest mistake could cost Bailey her life.
Illicit drug trafficking, prison gangs and corruption are just some of the things she’s up against… and behind it all lurks a sinister and terrifying secret that will truly test her survival instincts.

Heart-stopping and gripping. Perfect for the fans of hit TV shows such as Line of Duty, Orange is the New Black and Bad Girls.

The clank sounded out of place.

Alice Jenkins stopped pushing the laundry trolley and lifted her head. She tossed her
long reddish-blonde hair out of her face.

She was answered only by the repetitive groaning of the huge industrial washing
machines and dryers which lined both sides of the prison laundry.

She peered uncertainly into the shadows beyond the giant wire racks, which held folded
piles of freshly laundered bedding and towels. Down here in the basement there were no
windows and the overhead strip lighting flickered with a sickly insipid yellow which failed to illuminate the room properly.

Alice had only started her job in the laundry two days before. Normally there were
other inmates working in here, but this afternoon she was all alone. That was because she’d volunteered to do some overtime, explaining to the laundry supervisor that she wanted to earn a little extra cash for her canteen account.

She hadn’t been in prison for very long. Just a few weeks. She’d been sent down for
benefit fraud. Not a major crime but enough to land her inside for a year and three months.

But she seemed to be getting the hang of things. Like managing to get this job in the laundry.

There was still plenty of stuff that she was unfamiliar with though, so she wasn’t totally
relaxed by any means. In fact, she’d found that this place could suddenly put you on edge
when you were least expecting it. Like now for example.

She glanced around nervously.

‘Hey stop messing about!’ she said.

Maybe some of the other inmates – her laundry colleagues – were playing a practical
joke on her. She hoped so. Because if it wasn’t them then maybe it was one of the dangerous looking cliques she’d seen around the prison. Maybe they’d taken a dislike to her for some reason. Maybe they had it in for her.

‘Haha. Try and creep up on Ally. Yeah that’s hilarious. You can come out now.’

She tried to sound breezy but her nerves betrayed her, her voice instead coming out
reedy and uneven.

There was no answer. Just the incessant rumbling of the machinery.

Her knuckles turned white as she tightened her grip on the handle of the trolley and
squinted into the dim recesses of the cavernous laundry. A burst of excess steam hissed from a nearby pipe. She jumped and gasped, her heart thumping in her chest.
Her mind raced to think what had made the clanking sound. It might be a rat. The
prison did have a rodent problem. Or maybe she was just spooking herself out unnecessarily.

‘You silly girl,’ she muttered, shaking her head and pulling herself upright.
She recommenced pushing the trolley, awkwardly manoeuvring its bulky weight
towards one of the empty washing machines at the end of the room.

Then, out of the corner of her eye, she noticed a shadow pass behind one of the sheets
that were hanging up, waiting to be folded and placed on the wire racks.

She let go of the trolley and spun around to look. Was there someone there? She could
have sworn she was the only one in here.

No. It was surely just a ripple in the material caused by convection in the warm air
currents generated by the dryers. She turned back to the trolley, taking hold of the handle
once again.

But then in the darkness beyond the racking, just behind the dryers, something caught
her eye.

She stopped again, momentarily entranced by it as it twinkled in the shadows like a
lone star aglow in the distant black depths of deep space. For a brief moment she forgot her apprehension as she tried to make sense of it floating there in the shadows like the needle of a compass… turning… pointing in her direction…

Then a depth charge of cold fear detonated in her gut as she realised what it was.

Her heart began to hammer inside her chest. Her hands fell away from the handle of
the trolley.

They’d come to kill her.

They’d decided to come for her when she was all alone. She cursed her stupidity for
making the mistake of being down here by herself.

Somewhere along the line she’d messed up and now she was going to pay for it with her
life.

She felt a heavy nausea rise up inside her, the fear of impending death.

Slowly, she edged backwards around the trolley to put it between herself and whoever
was behind the dryers. She again squinted to try and see more.

In the shadows, silence. A flicker of movement in the darkness. A shadow within a
shadow. It was big. It was no rat. That was for sure. It was a person.

She gulped. Her mouth was dry. She glanced towards the doorway. It was at the far
end of the laundry. That distant metal door had never looked more appealing. Nor had it
ever seemed further away. She glanced back at the row of dryers.

Tensing, she took a deep breath… and bolted. Caro Savage knows all about bestselling thrillers having worked as a Waterstones bookseller for 12 years in a previous life.  Now taking up the challenge personally and turning to hard-hitting crime thriller writing.