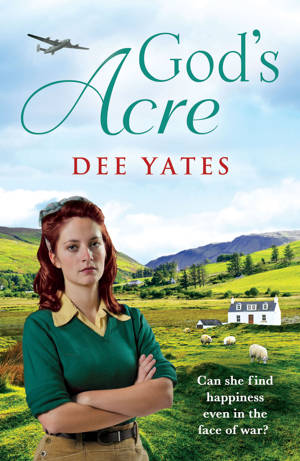 I’m so pleased to be sharing an extract from God’s Acre by Dee Yates with you today. It sounds like a lovely read. My thanks to Vicky Joss from Aria for the place on the tour.

As the drums of war begin to beat louder on the continent, and life becomes more dangerous in cities, seventeen year-old Jeannie McIver leaves the comfort of her Aunt’s house in Glasgow, to head to the wilds of the Scottish Uplands to start life as a Land Girl.

Jeannie soon falls in love with life on the busy Scottish hill farm, despite all of its hardships and challenges. She feels welcomed by the Cunningham family who value and cherish her far more than her own rather remote and cold parents, and the work is rewarding.

She even finds her interest piqued by the brooding, attractive Tam, the son of the neighbouring farmer, and a sweet romance between them slowly blossoms. But even in the barren hills, they can’t avoid the hell of war, and as local men start disappearing off to fight at the Front, Jeannie’s idyllic life starts to crumble.

Those left behind try desperately to keep the home fires burning, but then Jeannie makes one devastating decision which changes the course of her and Tam’s lives forever.

Liz cleans the garden implements and returns them to the shed. The phone is ringing when she steps into the kitchen. She hurries to the windowsill.

She toys with the idea of a sarcastic response, but sarcasm always leaves her feeling mean-spirited. So she merely replies, ‘Of course.’

‘What are you doing?’

‘Have you been busy?’ he asks, ignoring her question.

‘Yes. I’m starting to sort out the garden. How about you?’ Knowing what the answer will be.

‘Awful! Loads of work piling in at the moment. Can’t seem to get on top of it. And the study’s a tip. I need to get that sorted out before I start.’

She smiles. How many times has she heard that before? Remembering the days when she used to visit and he would heave piles of books and papers onto the floor to make room for her to sit.

The line goes dead. She stands a moment, the handset clamped to her ear.

‘Goodbye,’ she replies coolly into the silence and clatters down the phone.

She stares out of the window in a bad humour, surprised that the sun is still shining as brightly as it was. Taking off the old jacket that she uses for gardening, her feet search for the slip-ons that she discarded under the table at breakfast time. Not that she stayed still for more than a couple of minutes. Breakfast has become a time of snatched mouthfuls while she dries her hair or feeds the cat or rakes the ashes from the grate. She can’t sit down. The sound of the news programme grimly detailing its latest catalogue of misery is too impersonal a companion. At other meals, the computer or the television gives her a face or at least a screen. At breakfast she cannot afford to idle, for fear her thoughts will uncover the heart-heaviness that lurks always just below the surface.

She fills the kettle and switches it on. While she waits for it to boil, she takes down a circular biscuit tin from the shelf and cuts a generous slice from the fruit loaf contained within. She pours boiling water onto a teabag and milk into a small jug and carries her snack through to the conservatory. Placing the tray on the floor, she drags two heavy books from the shelf and kneels on the mat, running her finger down the index of one. Planning your Garden. It sounded like a good place to start.

Munching on the fruit cake, Liz reads about Climate and Location and then the section on Avoiding Problems. Lastly, her eyes scan the suggestions for Exposed Sites, Sloping Sites and Acid Soils. It is obvious that she will never be able to recreate the nooks and crannies of colour and rampant greenery to be found in her last plot. But the extensive list of drawbacks fails to dent her enthusiasm. It may take twice as long as usual to grow anything remarkable in the sloping, windswept area that is her garden, though the previous resident of the cottage obviously had, at some stage, green fingers. But she has plenty of time to make her own mark. She has no intention of going anywhere, not now, perhaps not ever. That is, until such time as she joins her silent neighbours in their final resting place.

She glances at the wall and the top of the headstones beyond it, one of them topped with a cloth-draped urn, and grins. Her garden soil might be more fertile than anyone imagines. After all, the graveyard has stood for at least three hundred and fifty years. Ample time for a collection of those considered outwith the mercy of God – or at least outwith the mercy of the established church – to be buried deep beneath the surface of her garden. Just as long as she doesn’t come across any of them. She would much rather their contribution to her garden remained anonymous. Born and brought up in the south of England, the eldest girl of nine children, Dee moved north to Yorkshire to study medicine. She remained there, working in well woman medicine and general practice and bringing up her three daughters. She retired slightly early at the end of 2003, in order to start writing, and wrote two books in the next three years. In 2007 she moved further north, to the beautiful Southern Uplands of Scotland. Here she fills her time with her three grandsons, helping in the local museum, the church and the school library, walking, gardening and reading. She writes historical fiction, poetry and more recently non-fiction. Occasionally she gets to compare notes with her youngest sister Sarah Flint who writes crime with blood-curdling descriptions which make Dee want to hide behind the settee.