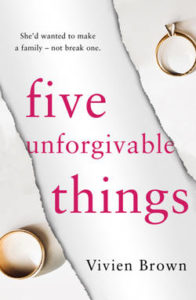 I’m delighted to be taking part in the blog tour for Five Unforgivable Things by Vivien Brown today and I have a fab extract to share with you. I’d like to thank Viv for asking me to be a part of the tour and I only wish I could have squeezed a read of the book in as it sounds so good.

Almost thirty years ago, Kate’s dream came true. After years of struggling, she was finally pregnant following pioneering IVF. But the dream came at a cost. Neither Kate nor her husband Dan could have known the price they would have to pay to fulfil their cherished wish of having their own family. Now, years later, their daughter Natalie is getting married and is fulfilling her own dream of marrying her childhood sweetheart. Natalie knows she won’t be like most brides as she travels down the aisle in her wheelchair, but it’s the fact her father won’t be there to walk beside her that breaks her heart. Her siblings, Ollie, Beth and Jenny, gather around Natalie, but it isn’t just their father who is missing from their lives… as the secrets that have fractured the family rise to the surface, can they learn to forgive each other before it’s too late?

The novel follows the course of a marriage, with all its joys and tragedies, over a period of forty years. The following extract is from Chapter One, and is set in 1976, when Kate first sets eyes on the man who will later become her husband.

The first time I set eyes on Dan Campbell, I didn’t fancy him at all. He was younger than me, for a start. Only by a couple of years, as it turned out, but enough for it to show. And his hair was a strange kind of half-blonde, half-mouse colour. A bit streaky, like it was neither one thing nor the other. I wasn’t sure if he’d made an attempt to colour it himself with some dubious home dye kit or if it was just nature’s way, but in any case I had always preferred tall dark handsome types, and Dan fell down on all three counts.

I was at a party in someone’s flat, part of a tall Victorian terrace, indistinguishable from a hundred others, with a dirty brown front door and crumbling windowsills, somewhere in West London, with just a bit of gravel and a low wall and a badly-lit pavement standing between it and the main road. The flat was up three flights of stairs. It was a bit grotty, with threadbare carpets and dodgy paintwork, and a dead spider plant on a shelf by the door with piles of bent fag ends squashed into what must once have passed as compost. Every time I went into the kitchen to look for another drink it felt like my shoes were sticking to the floor. Beer spurting in all directions when people pulled the tabs on shaken up cans didn’t help, not to mention the cheap wine dripping as it was poured, inexpertly, into plastic glasses, and the odd dropped sausage roll trodden greasily into the lino. Still, nobody seemed to notice, or care, except me.

To be honest, I wasn’t really sure whose flat it was, or even whose party it was. Back then, once the pub closed, it didn’t take much to get me to follow whoever I happened to be with to wherever they happened to be going. Anything was better than going back to my mum’s, now that Trevor was there. That particular Saturday night, though, I wasn’t really in the mood for partying. I’d only been there an hour or so, and the bloke I thought I was with had clearly had other ideas and moved on to a rather over-loud redhead with a low cut top and eyelashes long enough to swat a fly. Not that I minded. He was hardly the love of my life. Still, his defection had left me worrying about how I was going to get home. Whether I’d missed the last bus, how far it was to walk, and how safe. Whether I could afford a taxi.

I was picking my way down the last of the narrow litter-strewn staircases, holding my bag in one hand and clutching the rickety banisters with the other, heading for the front door, when Dan Campbell walked in. Only, I didn’t know who he was then. Just some random stranger, letting himself in, not even seeing I was there.

He had his head down, dripping rain from a long grey mac. He was fumbling a set of keys out of the lock and back into his pocket, and carrying a soggy carrier bag, bottles chinking together inside it as he stopped to stamp his shoes on the doormat. I peered out past him, through the open door, into the darkness, split only by the glow of passing traffic, still heavy despite the time of night, wipers thrashing, headlights on, hazy at the edges. Rain. Lots of it. It hadn’t been raining when I’d arrived and it wasn’t something I’d bargained for when I’d dressed to go out. Taxi it was then, if I didn’t want to ruin my new heels, or my hair. I’d just have to raid Mum’s secret tin when I got home if it turned out I didn’t have enough for the fare. Not that it was much of a secret when I knew exactly where she hid it. But Trevor didn’t know, and that was what mattered.

I reached the bottom step and hesitated, waiting for this drenched man to finish wiping the water from his glasses and the mud from his shoes and notice me, move aside, leave my exit clear, but the door slammed behind him, shutting out the rumble of the traffic, enclosing us in that small space, with just the thump of the music above us, oozing its way through several layers of ceilings and floors.

And then he lifted his face and looked at me, a bit startled, and I looked right back at him, a lot less so, and you know how, sometimes, you just feel it? A connection, an understanding, something in the eyes that says, ‘Stay. Stay and talk to me. It’s much too early to leave. Come and re-join the party. You know you want to.’ Actually, he may have said it for real, not just through his eyes. I can’t be sure now. Whether he was already a bit drunk, or I was. It’s a long time ago, and the combination of time and lager tends to tamper with the finer details, shroud them all in a woozy kind of fog that may or may not have been entirely unpleasant, or unwelcome.

But, for whatever reason, or possibly for no obvious reason at all, I picked up my bag from where I’d been resting it on the table in the communal hallway, the one with all the junk mail on it, and I followed him back up the stairs to the party. Even though he was clearly too young, too short, too streaky, not my type at all. Even though all those things ran instantly through my head, and were just as instantly dismissed, I still followed him up those stairs. I still did as he asked, and stayed. Vivien Brown lives in west London with her husband and two cats. She worked for many years in banking and accountancy, and then, after the birth of twin daughters, made a career switch and started working with young children, originally as a childminder but later in libraries and children’s centres, promoting the joys of reading and sharing books through story-times and book-based activities and training sessions. As Vivien Hampshire, she has written many short stories for the women’s magazine market and a range of professional articles and book reviews for the nursery and childcare press, in addition to a ‘how to’ book based on her love of solving cryptic crosswords. Now a full time writer, working from home, Vivien is combining novel-writing and her continuing career in magazine short stories with her latest and most rewarding role as doting grandmother.