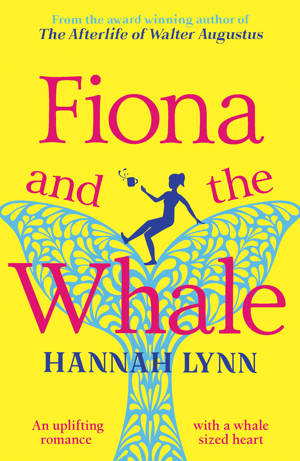 I’m very pleased to have an extract to share with you today from Fiona and the Whale by Hannah Lynn. There’s also a ‘Whale Sized Giveaway’ for you as well. My thanks to Rachel Gilbey from Rachel’s Random Resources for the place on the tour.

With her personal life on the rocks, it’s going to take a whale sized miracle to keep her afloat.

Event planner Fiona Reeves did not have her husband’s sudden departure on her schedule. However, she’s certain that it’s only a hiccup and he’ll be back in no time, begging for forgiveness. Fortunately there’s a distraction of mammoth proportions swimming in the River Thames.

Absorbed by the story of Martha the sperm whale, Fiona attempts to carry on life as usual as she awaits her husband’s return. However, nothing can prepare her for the dramatic turn of events that throws her life into ever greater turmoil. The road ahead has many paths and for Fiona it’s time to sink or swim.

Fiona and the Whale is a poignant and often hilarious contemporary fiction novel. If you enjoy topical tales, second chances and a little bit of romance, you’ll love this new book from the Kindle Storyteller Award Winner, Hannah Lynn.

Shards of sunlight sneaked between the curtains as Fiona rolled over onto the cold side of the bed, the sheet still perfectly flat and unrumpled. She’d slept in their bedroom at least, that was an improvement on the previous three nights, although, from the way she was struggling to open her eyes, she probably could have done with going to bed a little earlier. What time had she finished sorting downstairs? She struggled to remember. Two? Maybe three?

Forcing herself to sit up, she checked the time, only to blink and double check. Ten thirty – that was practically midday. And no wonder her head was throbbing. The last time she went that long without a coffee must have been when she was pregnant. After double checking that no emails or messages had come through while she slept, she slipped her feet off the side of the bed. Then, rubbing her temples, made her way downstairs and straight to the coffee machine.

The television in the corner of the lounge was still on and turned to a news channel. For some reason, today the voices grated even more than ever, and Fiona went in to switch it off, when something caught her attention.

‘Early morning joggers first noticed the sperm whale this morning.’ The news reporter told her. ‘The mature female, who has been nicknamed Martha, has been most obliging, swimming peacefully up and down the river. She looks perfectly happy; don’t you think, Rick?’ she posed her question to her fellow news reporter.

‘I do, Stephanie,’ news reporter Rick replied. ‘Now I’ve read here that sperm whales are the largest of the toothed whales, and females tend to stay in large pods for their entire life, so it is unclear right now how she came to be separated from her family.’

‘Or how the heck she wasn’t spotted before now.’

Fiona’ dropped down onto the sofa and stared at the screen. For such a large creature it was difficult to see in the grey-brown water of the Thames. A minute of live footage passed with nothing but passenger boats and ambling tourists, waiting to catch a glimpse of Martha. Fiona’s eyes remained fixed on the television screen. She’d been whale watching before, off the coast of New Zealand, and it had been a fun enough trip but nothing like the photos they showed you where the whales breach right in front of the boats. A vague dot on the horizon was the best they got. This was probably going to be the same, she thought. She was just about to give up and go make her coffee when out of the water came the head of the whale.

It was an aerial view. The sleek grey body, just breaking the surface of the water, causing foaming ripples to blossom out in its wake. Fiona sat back in the sofa; her mouth wide open.

‘We have with us today marine biologist Professor Ben Arkell.’ They were back in the studio. The image of the Thames had shrunk to a thumbnail at the corner of the screen. ‘Professor Arkell, what can you tell me about sperm whales? I’m guessing that the Thames isn’t their natural habitat?’

‘No. It’s not.’ Professor Ben Arkell sucked in his cheeks as he spoke. ‘Sperm whales are usually found in much, much deeper water, although it has been the case that individuals, and sometimes pods, have beached themselves on UK shores before. But even so, this is highly unusual.’

‘And so, could we expect to expect to see more appearing. Whole pods, as you say? Could this just be a slight navigational error?’

‘I think we can agree it’s definitely not a slight navigational error here,’ he said. ‘The question in how she would get herself stranded and so far from the pod.’

‘Pods are important to these types of whales, I take it?’

More cheek sucking and nodding from Professor Arkell. ‘Sperm whale pods can be reach up to sixty individuals, normal females and juveniles. A female of this age would almost certainly have calves and they’re exceptionally family orientated. It’s worrying to think what could have happened.’

The image zoomed once again to the whale, before panning out and showing just how alone poor Martha was.

‘Do you have any idea of what could have happened?’ It was the female news reporter’s question.

‘I have several,’ he told them. ‘But all unsubstantiated. What we need now is to figure out how to get her back to the open sea.’

‘And to her family,’ Fiona whispered to herself.

Fiona remained glued to the screen. Sixty whales, she kept thinking over and over in her head. Sixty whales meant fifty-nine family members. Fifty-nine people that should be by her side but weren’t. And here she was finding it odd in a house without two. It must have been crazy for Martha. Then again, perhaps she liked the peace a quiet. Christmas Day with all the nieces and nephews was enough to put Fiona off family gatherings for another year, and there were only twelve of them all together. Maybe the Thames was Martha’s equivalent of a spa break. She took out her laptop and began to search on the general behavior patterns of female sperm whales.

For the most part, it seemed like the expert on the matter was indeed correct it what he was telling them, but it still felt ridiculous. How could a giant sperm whale – or Physeter macrocephalus as she now knew ‘its correct name to be – possibly end up in London without someone having spotted it before? It was the size of a bus.

Throughout the morning, more and more snippets of information and images came to her screen. Perhaps she had a son, Fiona thought, watching Martha glide under the Vauxhall Bridge. Perhaps she’d been looking out for him; doing what she thought was the best for him, only to be blindsided and suddenly end up on a path all on her own. Her heart ached. How was this right? How could someone not have put her back on the right path before she even got this far? But there were rescuers with her now at least. They would get her back home before long.

The eleven o’clock headlines marked a sudden awareness of time for Fiona. Looking down at her bare legs, she blinked at the realization that she’d not yet managed to get showered or dressed nor, as evidenced by the furry taste that clung to the roof of her mouth, had she cleaned her teeth. The thought of staying that way – undressed as opposed to unwashed – flitted through her mind. After all, she was allowed to wallow. Isn’t that what people did when their husbands walked out? Isn’t that what people did when their only child flew the nest? She was faced with a double whammy, she deserved this time. A momentary pity party began to form in her mind, only to be snuffed out by the sight of Martha passing a group of intrigued rowers. Placing her coffee cup down on the side she stood upright and faced the television.

‘You’re still going.’ She spoke to the whale, whose silhouette she could just make out under the water. ‘If you can keep doing this, then so can I.’

After cleaning her teeth and indulging in an extra-long gargle of mouthwash, Fiona showered and dressed, picking an outfit from the back of the wardrobe. The short burgundy number was something she’d always put off wearing on the basis it felt a bit glam for daywear. But today, glam was what she wanted. Glam and confident. Empty nest syndrome, that’s all it was, for Stephen too. He would see it soon enough. Besides, however bad her day was going, it wasn’t going anywhere near as badly as poor Martha’s. And if that whale could keep swimming like it was all just fine, then so could she. It had been a long time since Fiona could remember having a role model in her life, but stood there, thinking about the incredible situation that Martha was having to endure, she was pretty sure she’d found one again. Or at least, a kindred spirit.

Prizes are
$25 Amazon Gift card
2 print copies of Fiona and the Whale
10 ebooks of Fiona
5 ebooks of The Afterlife of Water Augustus
5 ebooks, of Peas, Carrots and an Aston Martin. Hannah Lynn is an award-winning novelist. Publishing her first book, Amendments – a dark, dystopian speculative fiction novel, in 2015, she has since gone on to write The Afterlife of Walter Augustus, a contemporary fiction novel with a supernatural twist – which won the 2018 Kindle Storyteller Award and the Gold Medal for Best Adult Fiction ebook at this year’s IPPY Awards – and the delightfully funny and poignant Peas and Carrots series.

While she freely moves between genres, her novels are recognisable for their character driven stories and wonderfully vivid description.

She is currently working on a YA Vampire series and a reimaging of a classic Greek myth.

Born in 1984, Hannah grew up in the Cotswolds, UK. After graduating from university, she spent ten years as a teacher of physics, first in the UK and then around Asia. It was during this time, inspired by the imaginations of the young people she taught, she began writing short stories for children, and later adult fiction Now as a teacher, writer, wife and mother, she is currently living in the Austrian Alps.

Amazon.co.uk – The Afterlife of Walter Augustus

Amazon.com – The Afterlife of Walter Augustus