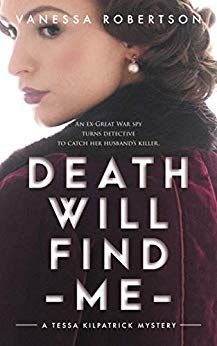 Welcome to my stop on the tour for Death Will Find Me by Vanessa Robertson. I have a lovely extract to share with you today. My thanks to Kelly Lacey from Love Books Group Tours for the place on the tour.

Finding her husband – the feckless James – with another woman at a 1920s country house party, she demands a divorce. But when his body is discovered in a lonely stone bothy the next morning, Inspector Hamish Rasmussen sees Tessa as his only suspect.

Back in Edinburgh, links to another murder convince Rasmussen of her innocence. He enlists her help and together they set off on a pursuit that will bring Tessa once again face to face with the brutality of war as well as revealing to her the lengths that desperate people will go to in order to protect those they love.

Will Tessa be able to prevent a final murder or will she become the killer’s latest victim?

This book will be perfect for anyone who’s enjoyed the work of Catriona McPherson, Sara Sheridan and Jessica Fellowes.

The Water of Leith was fast-flowing with melt water from the Pentland Hills and the air was crisp and cold. A mile or so along the riverbank with the dogs had cleared Tessa’s head and rid her of the indecision she’d been feeling since Rasmussen’s visit that morning.

By the time she, Bosun and Mycroft turned homewards, heading towards Heriot Row and a warm fire, she was resolved. She would make the list and take it to Rasmussen at Torphichen Street police station the next morning. She didn’t want to unfairly accuse anyone of being up to no good with her husband, but if finding James’s murderer meant some people had to brazen out a little embarrassment then so be it.

In the short term, she needed to warn her parents, especially her mother, of the grenade she was about to lob into the centre of Edinburgh society; she feared that the list of James’s known and possible lovers would be long and the fallout significant.

She whistled to the dogs, calling them away from their fossicking on the riverbank and turned up the steep hill of Bell’s Brae. The evening was drawing in. A few street lamps were lit, their lights glinting off the slick granite setts. For no reason she could name, the back of Tessa’s neck prickled. Just as at the boathouse, she had a feeling she wasn’t alone. It unnerved her. After she’d come home in 1917, she’d had spells of paranoia where she thought that she was being followed or that an intruder was in the house. Those had grown

fewer, although she knew she was probably more vigilant than most when it came to locking doors and noticing strangers. She hoped James’s murder wasn’t going to drag her back to those fears.

Then she heard the scuff of a boot on the cobbles behind her and knew this was no irrational fear. Someone was following her. Tessa’s every sense was electrified and she spun round, fists clenched by her side to face whatever fear was behind her. I grew up in the Midlands where my main interests were horses and drama. Being a writer was a dream from childhood but I gave up on the idea of writing when I was a teenager, not long after I abandoned other childhood ambitions of being a trapeze artiste or a spy. After acquiring a couple of degrees and trying various ‘proper jobs’, I realised that I am fundamentally unsuited to office politics, bad coffee, and wearing tights.

My husband and I founded The Edinburgh Bookshop, winner of many awards. Bookselling is a wonderful profession and a good bookshop is a source of pure joy to me. I love independent bookshops and the amazing job they do in championing reading, supporting authors, and building communities. But, after a few years, it was time for a change and we sold the bookshop to make way for other projects.

I took the opportunity to start writing again and was a winner at Bloody Scotland’s Pitch Perfect event for unpublished authors in 2015. It was a fantastic opportunity and getting such positive feedback about my ideas gave me the push I needed to take my writing seriously.

I live in Edinburgh with my husband, our teenage son and an unfeasibly large Leonberger dog. I can usually be found walking on windy Scottish beaches, browsing in bookshops, or tapping away on my laptop in one of the scores of cafes near my home.