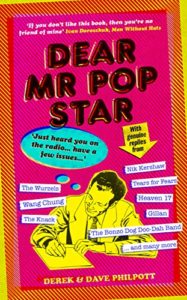 For more than a decade, Derek Philpott and his son, Dave, have been writing to pop stars from the 1960s to the 90s to take issue with the lyrics of some of their best-known songs. But then, to their great surprise, the pop stars started writing back… Dear Mr Pop Star contains 100 of Derek and Dave’s greatest hits, including correspondence with Katrina and the Waves, Tears for Fears, Squeeze, The Housemartins, Suzi Quatro, Devo, Deep Purple, Nik Kershaw, T’Pau, Human League, Eurythmics, Wang Chung, EMF, Mott the Hoople, Heaven 17, Jesus Jones, Johnny Hates Jazz, Carter the Unstoppable Sex Machine, Chesney Hawkes and many, many more.

”Team Philpott’s masterful oeuvre, with their infallibly astute and uncannily insightful interpretation of popular songs, has raised the world of pop-music criticism to the level of ‘high’ literary art! (Which is also the recommended state for fully appreciating their comic genius!) – Dean Friedman

“Having not had that many hits in my 40 years in pop, I assume this is possibly the last I’ll be hearing from you…still, it’s been fun!”

David Was, Was Not Was

”Thank you for your letter. It has changed my life.

“I meant every word of it. At least I think I did.”

”I have passed your letter on to my lawyer, a restraining order will shortly be in place. Let that be the end of it. What wonderful madness”

”Thanks for a madcap slant on the serious lyricist; as for myself, I am from a very musical family – even our sewing machine was a singer.”

”If you don’t like this book, then you’re no friend of mine”

“These remarkable pedants have been the bane of my life in recent years; one can only wonder at what they would possibly glean from such works as T.S. Eliot’s “The Wasteland”, or “The Ballad Of Tam O’ Shanter” by the great bard Burns his self. On behalf of all concerned, please don’t do a poetry book, we implore you.”

Well done again and all the very best.
Jo Callis (Mrs.) On behalf of The Human League (also Mrs.).

”Derek, hopefully sales will be more robust than your intellectual rigour should the proposed ‘Dementia Tax’ come to realisation”

“‘My oh my Derek’, when this is over then ‘Everyday will ‘hurt’ without you!! I need to pick me up a Strange Little Girl!!” xx

Sirs:
I can only repeat my response to your last enquiry on this subject: I’m sorry, but I am NOT interested in purchasing your book, “comic” though it may be.  I trust this puts an end to the matter, and I will have no need to write you a third ti– oh, wait a second, I might have gotten…Congrats on your new book!
Eagerly awaiting my copy, I remain as ever,

I will forever associate you with my wife’s wonderful words- ‘Have you replied to that bloke yet?’

“Does this have anything to do with the copper top frying pan I ordered? If so, can you include the 3 finger oven mitt… Thanks, James Lowe, Electric Prunes

”It’s not often the drummer in the band gets to speak, apart from “Where’s my bleedin’ wages ?”. So thank you chaps for the opportunity to spout off a load of ol’ drivel for your hilarious project.

The pleasure was all mine.”

””In which I answer the musical question…erm…what was the question?”

“It was a thrill to receive your enquiry and an honour to be able to respond,” Will Birch, Kursaal Flyers

Dear Middle Of The Road,
Re: ‘Chirpy Chirpy Cheep Cheep’
I write pertaining to the sudden disappearanceof both this momma and papa on the very same night.
Sadly, not in the same sense as your June 1971 chart-topper, it would appear that they have been the subjects of a ‘hit’, most likely either gang or Mafia-related. That the now orphaned infant is referred to as Little Baby Don, implying an early initiation as the new Godfather of a flourishing crime empire, only serves to confirm that its parents are not far,far away, but more likely sleeping with the fishes.

Furthermore, it is feared that ‘mama singing a song’ could have been misinterpreted, unless of course the panicked mole was singing like a canary, to use the slang term for providing valuable information to a non-allied third party.

Our secret has been rumbled. No one was meant to know.I Hope the ‘Fuzz’ do not read your epistle.
Since the ‘disappearance’ of our guardians, we have been continually dominated by ‘Baby Don’ screaming forimmediate sweets, fizzy drinks & popcorn. He threatens lots of terrible consequences if we do not appease him and agree to his demands.

He even threatens to write a follow-up to ‘Chirpy’… what a terrifying thought… sometimes it makes us want to lie lengthways in the literal interpretation of our band name.
We have no option but to agree to his increasing demands! Derek and Dave Philpott are the noms de plume of two ordinary members of the public, working with help from a worldwide social networking community.