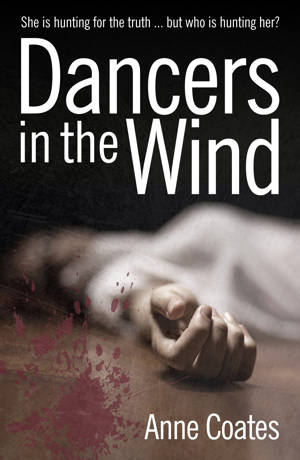 Posted on 5th September 2019 By Nicola

Welcome to my stop on the blog tour for Dancers in the Wind by Anne Coates. I have a fabulous extract to share with you today. My thanks to Kelly Lacey from Love Books Tours for the place on the tour.

Freelance journalist and single mother Hannah Weybridge is commissioned by a national newspaper to write an investigative article on the notorious red light district in Kings Cross. There she meets prostitute Princess, and police inspector in the vice squad, Tom Jordan. When Princess later arrives on her doorstep beaten up so badly she is barely recognisable, Hannah has to make some tough decisions and is drawn ever deeper into the world of deceit and violence.

Three sex workers are murdered, their deaths covered up in a media blackout, and Hannah herself is under threat. As she comes to realise that the taste for vice reaches into the higher echelons of the great and the good, Hannah realises she must do everything in her power to expose the truth …. and stay alive.

Hannah Weybridge, wearing a floral-print dress she could just squeeze into under a short-sleeved linen jacket, stepped out of the taxi and searched for her purse. Never, she told herself for the umpteenth time, buy a black purse and use it with a black-lined bag. Her fingers eventually found what she was looking for and, having paid the driver, she paused at the kerbside taking in the scene she had now become a part of. Sunshine highlighted the red tones of her shoulder-length hair. Wispy curls framed her face. She donned her sunglasses and looked across the forecourt.

King’s Cross was heaving. Built nearly a century and a half ago, it had a charmless air about it. The renovations, including the unprepossessing glass frontage did nothing to enhance its allure. Somehow it lacked the undercurrent of excitement that wafted through other city stations. It was not a place anyone would wish to linger. And yet the forecourt attracted – apart from the people who were there for the obvious reason – more than its share of loiterers and dawdlers.

Two young men in nondescript clothes were sitting on the ground with their backs resting against a barrier, drinking lager from cans and eyeing a group of winos who, in spite of the heat, still wore long, shapeless coats whose original colours had long since given way to drab uniformity. They seemed sexless too. The one woman among them was only distinguishable by her lack of facial hair. She laughed at something and revealed chipped and blackened teeth.

The sound drew a frown from an elegant West Indian talking into a mobile phone. His eyes were hidden behind dark glasses but his body gave the impression of a coiled spring ready for action. Regardless of the heat, he looked remarkably cool and fresh. He was standing near the kerb as a taxi pulled up almost alongside him and he jumped back smartly as the door opened.

The crowd around the various bus stops was an amorphous mess – No nice British queues here, Hannah thought – and, as a number 63 approached, there was a movement forward which threatened to engulf anyone in its way. A woman clutched a child in danger of being swept along. In marked contrast, the long, snaking queue for taxis was relatively sedate. Businessmen jostled with travellers laden with suitcases and subdued children, too tired from their journeys to create a fuss. A beggar was walking down the line, hat in hand, while his friend serenaded them with a penny whistle. Hannah wondered what their takings would be and looked away.

She wished she hadn’t. By the station entrance a young woman sat leaning against the wall. Her face was expressionless. She looked thin and hungry as did the child who stood by her, looking eagerly at each passerby who might be encouraged to add a coin to the paltry few in the tin before them. Some welfare state, Hannah thought, as she walked over to them and contributed her loose change.

Feeling guilty and self-conscious, she looked at her watch. Exactly 11am, the time she had been told to meet the BBC researcher outside Casey Jones at the front of the station. And the photographer. She didn’t know what he looked like either. Hannah sighed. It was one of the drawbacks about being freelance – she never seemed to work with the same photographer twice. In the five years since Hannah had given up her staff job on a woman’s magazine, she’d managed with varying degrees of success to keep her career afloat. The advantages of being her own boss and not having to waste time on office politics just about outweighed the handicap of not having a regular income, paid holidays and sick leave. Having a baby, however, had caused a real blip in her finances and she was really grateful for this commission via a friend who worked on The News and had recommended her to the features editor of the colour supplement.

A shout rang out above the general hubbub. Hannah just caught sight of a man running across the far side of the forecourt in determined pursuit of two boys. She wondered what their crime – if any – had been or if they were actually running away from danger. No one around took any notice. No one cared. It reminded Hannah of why she was there – to interview a prostitute and a police officer who were both appearing in a documentary about the seedier side of life at King’s Cross.

From the information she’d been given, the scene before her, basking in the summer sunshine, masked an underworld of vice which was low key during the day but erupted as the sun sank. Remembering the sign she’d passed recently, proclaiming that vice patrols operated in the area and offenders would be prosecuted, she glanced around curiously, wondering who were the pimps and whores, who the dope-pushers… For most of her working life in publishing, Anne has had a foot in both camps as a writer and an editor, moving from book publishing to magazines and then freelancing in both. Having edited both fiction and narrative non-fiction, she has also had short stories published in a variety of magazines including Bella and Candis and is the author of seven non-fiction books. Telling stories is Anne’s first love and nearly all her short fiction as well as Dancers in The Wind and Death’s Silent Judgement began with a real event followed by a ‘what if …’. That is also the case with the two prize-winning 99Fiction.net stories: Codewords and Eternal Love.