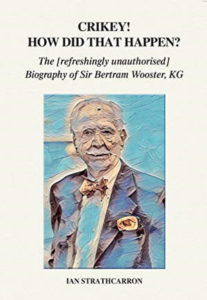 ShortBookandScribes #BlogTour #Extract from Crikey! How Did That Happen? by Ian Strathcarron @Bookollective

Welcome to my stop on the blog tour for Crikey! How Did That Happen? by Ian Strathcarron. I have an extract to share from this biography of Bertie Wooster, no less! My thanks to Aimee from Bookollective for asking me to be a part of the tour.

Up until now we have only known Bertie Wooster in his mid-twenties; this is his first whole life biography, told in ten short stories at seven year intervals. Thus we first meet Bertie aged seven, in 1907, at Malvern House prep school, then follow him to Eton aged fourteen and Oxford at twenty-one. We meet Jeeves when Bertie is twenty-eight and then they go their separate ways: Jeeves to the Royal Household at Buckingham Palace and Bertie to the French Riviera at its most glamorous, causing havoc with Somerset Maugham and Alfred Hitchcock, before being accidentally captured by the Italian fascists and spending Christmas Day 1942 with Mussolini.
After WWII Bertie resumes his career in musical cabaret, headlining the Royal Variety Performance in 1949, before being pitched into the machinations of Hollywood at its prime in 1956. In 1963, Bertie, caught up in the zeitgeist, finds himself in the Himalayas with the Maharishi and then we say goodbye to a very much alive Sir Bertram in 1970 in Mustique, where he becomes involved in a murder mystery with many of the leading tax exiles and celebrities of the day.

That afternoon Bertie walked alone up the High Street towards Windsor. He knew he was doomed. Spode had called the police, the police had called the Head, the Head had called the dame and the dame was certain to point the finger right at the Bertram chest. He would, in short order, be: flogged by the Head, arrested by the constabulary, up before the magistratus, thrown out of Hawtrey, sacked from school and sent home to Easeby. All before the age of fifteen. After that the unknown. There was no way out, he was a sitting duck awaiting his turn in the headlights.

Tea came and went for the others in Hawtrey’s. Bertie’s stomach felt as if a lead balloon had finally found its landing ground and was now looking for a permanent hangar. The end-of-tea bell tolled and tolled for he. All the boys trooped out for the line-up, looking forward to this new adventure, chattering and chirping as usual and were soon mingling with the boys from neighbouring houses, until this mingle was joined by outlying mingles and within minutes eight hundred boys below sixth form were standing, shivering in the School Yard beneath the fine bronze statue of the school’s founder, King Henry VI.

The headmaster, the later ridiculed pacifist Rev. Hon. Edward Lyttelton, stood on the steps of the chapel, dressed in his official garb and shouted for the boys to line-up in order. Bertie’s number was 97; 96 more juniors were on his right and 812 more seniors on his left. At the foot of the steps stood Spode; alongside him were two officers from the Royal Berkshire Constabulary, handcuffs at the ready; and alongside them was Miss Cuthbert, the dame from Warre who had seen Bertie, his peering face framed by his cupped hands, so clearly through the glass.

With what seemed to Bertie like unnecessary ceremony, this hounder of the Woosters crossed the yard with persecutory intent and laid eyes on the first boy in the line; the one 812 places to Bertie’s left. Slowly she walked down the line. The proved innocent stayed behind to witness the shaming of the guilty. For number 97 it was an eternity of slow torture; Mistress Cuthbert was agonising over the guilt or innocence of each boy as if performing a duty even more solemn than the one to hand.

700; 600; 500; 400; 300; 200 boys; down the line she passed. She was now close enough for Bertie to see her as recognisably as he had through Spode’s window, applying the Spode bandage to the Spode foot. 180; 150; 120, nearer, yet still nearer. And then a distraction, a disturbance and all boys looked towards the archway adjoining Brewhouse Yard. Through it drove a powder blue Talbot 12 hp. It parked in front of Spode and the constables and behind the deliberating Miss Cuthbert.

‘Who’s in charge here?’ she demanded, pointing her walking stick at the reverend on the steps.

‘I am the headmaster,’ replied Lyttelton, ‘and may I ask who you are?’

‘Never mind that!’ barked Aunt. ‘You have a particularly vile boy here who is also a kicker of dachshunds. I know his name but not his appearance. I will leave the offended dog to find him. The dog is clearly far more intelligent than he is. You have done well to for prepare this line-up of boys for our bully hunt.’ Turning to the Hawtrey dame, she urged: ‘Come along now Atkins, bring your dog to bear.’

‘I’m really not sure all this is necessary, Mrs. Gregson,’ replied the shrinking M’Dame.

‘Of course it’s necessary or we would not be doing it. Bring Wolfgang along the line. Now, Atkins, now. Wilhelmina, you come too.’

Thus in quick succession to the official inspection, the unofficial one filed down the line. This latter appraisal sped along much faster than the first. Aunt Agatha led the way, followed by Wilhelmina trotting behind, followed by Miss Atkins with Wolfgang on a lead. No-one was quite sure why they were doing what they were doing, Wolfgang least of all. As she sped past Bertie he gave his aunt a beaming smile, of relief as much as welcome, but she failed to see him. Wilhelmina, though, did stop, jumped up Bertie’s leg and gave him a big dachshund tail wag and friendly yelp. Aunt Agatha looked back ‘Ah, it’s you Bertie. Might have known you would be in the thick of it. Still, it’s not you being beastly this time.’ Then Miss Atkins arrived and Wolfgang recognised Bertie too, who soon had two dachshunds admiring him. Ninetysix pairs of trousers later both dogs and both dames were at the ends of the line.

Wolfgang then looked around. And froze. Then unfroze, barking madly, pulling on the lead directly at Spode. A convoy was soon on its way… Ian Strathcarron is the author of Never Fear: Reliving the Life of Sir Francis Chichester, Joy Unconfined!: Lord Byron s Grand Tour Retoured, the Mark Twain travel trilogy Innocence and War, The Indian Equator and Mississippi Mayhem and the philosophy works Living with Life and Mysticism and Bliss. He is also Chairman of Unicorn Publishing Group and a mediator with the cultural property ADR service Art Resolve.