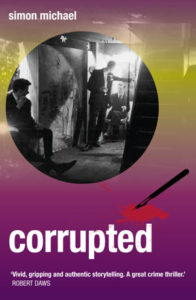 I’m delighted to be able to share an extract from Corrupted by Simon Michael today. My thanks to Kelly Lacey from Love Books Group Tours for asking me to be a part of the blog tour.

“Vivid, gripping and authentic storytelling. A great crime thriller.”
— Robert Daws, bestselling author of ‘The Rock’ and ‘The Poisoned Rock’.

Corrupted is the fourth book in the Charles Holborne thriller series, and Simon Michael’s follow up to the bestselling ‘The Lighterman’.

Charles is building his reputation as a brilliant murder trial lawyer and living the good life with partner Sally. But he can’t escape the influences and dangers of the past, and finds himself drawn once more into the orbit of the notorious Kray twins.

It’s not long before Charles is courting scandal and threats to his very life when investigating a sex ring that involves not just the Krays and the Mafia, but goes to the very echelons of the country’s power.

Simon Michael brings the past back to life across a beautifully rendered swinging 60s landscape, and delivers a gripping piece of thriller fiction that will excite any fan of the genre.

In later years, Ronnie and Reggie Kray will joke that Maurice Drake, known to his associates as Mo, was the only member of the Firm ever to die in his sleep. It isn’t strictly true. Several elderly members of the Firm who survive the Krays and their brutal rule of London will indeed die peacefully in their beds, having paid their debts to society by serving varying terms of imprisonment. But the Twins possess a certain black humour, which will no doubt stand them in good stead during the lifetimes of imprisonment that follow their eventual conviction. But that is to get ahead of our- selves in our story.

Perhaps it is more accurate to say that in the seconds before Mo’s death, he is asleep in bed. That bed is to be found in the L-shaped bedsit he occupies on the draughty top floor of a terraced house in Middlesex Street, a five- minute walk from Aldgate East, East London, and close enough to Liverpool Street Station to feel the day and night rumble of trains.

It is the early hours of 29 June 1964, a Monday, and Mo has been at a party of a particular and select group of men, hosted by Ronnie Kray at the latter’s Walthamstow flat. He stumbles into his bedsit, having drunk quite a lot of alcohol and on the way down from a couple of dexies. He manages to strip to his underpants before falling face down onto his pillow without even shutting the door, and within a short time he is snoring gently. Importantly, as it turns out, he forgets to take off the heavy gold-coloured chain around his neck. Within five minutes he is deeply asleep, his breathing shallow and regular.

It is a further ten minutes before a dark shape rises silently out of the shadows. A hand stretches out and is lowered, inch by inch, until it hovers just above the chain resting on the nape of the sleeping man’s neck. The hand starts to move up and down gently, minutely, until it is syn- chronised with the rise and fall of Mo’s body. A second hand is brought up to meet the first. In it is clenched a metal comb with a long handle. The tweezers of the fingers close on the chain and it is lifted very, very carefully above Mo’s neck. Then, with speed and precision, the hilt of the comb is slid under the chain and twisted rapidly. Simultaneously, the would-be murderer launches himself onto Mo’s back, strad- dling the widest part of his ribs.

Mo coughs into confused wakefulness but the chain is

twisted again, and again, this time with a hand at each end of the comb as if a propeller is being turned. The chain digs deeply into Mo’s windpipe, and now he can’t inhale. Fully awake, he tries to force himself onto his knees but    is surprised to find a weight across his back and, in response, the comb is twisted again. And again. And again. There is a snap as something collapses inside Mo’s windpipe and suddenly he is overwhelmed by the certainty that he’s about to die. His lungs bursting, he has to draw breath but his throat is completely closed. He thrashes even

more violently and manages to roll onto his side, but his attacker remains behind him and continues to twist with  all his strength, maintaining the pressure despite the steel teeth of the comb digging painfully into his palm. The comb feels slick and sticky in his hands, but with whose blood is unclear.

Mo’s attempts to reach behind him grow feebler.

Gradually he subsides and, at last, he is still.

The murderer rises and walks silently to the cracked basin in the corner of the room. He turns on the cold water and lets it run over his aching hands for a while. The blood makes the water almost black in the half-light. After a while he turns off the tap, dries his hands calmly on a dishcloth, and opens the curtains a few inches to allow more yellow sodium light from the street to filter into the room.

Even in the poor illumination, he can see that Mo’s face is suffused a dark red, almost purple colour. His eyes are wide open and there are tiny burst blood vessels, the branches of miniature trees, covering the whites. There is a considerable quantity of blood and macerated skin on the pillow and the chain is so deeply embedded in the soft tissues at the front of his crumpled neck that it actually disappears from view. The murderer carefully peels it out of the deep groove, lifting Mo’s body slightly by one shoulder to free it.

Five minutes of scrubbing and several changes of water later, and the blood and skin paste filling the gold links  has disappeared down the plughole. Held up to the dim light, the chain is a glittering golden snake, swinging gently.

With a final check round the room, the murderer opens

the bedsit door and creeps silently down the three flights of stairs into the night. During Simon Michael’s years of practice at the Bar he has prosecuted and defended enough murderers, armed robbers, con artists and other assorted villainy to provide him with a lifetime of true crime stories. The Charles Holborne thriller series is set in the dangerous gangland streets of 1960s London. Simon currently lives in London.