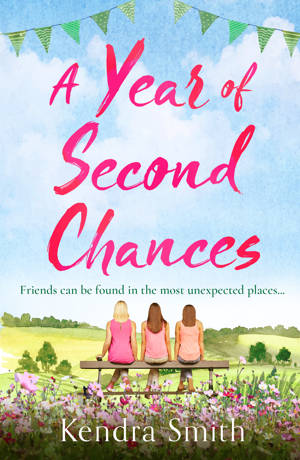 I’m so pleased to be able to share an extract with you today from A Year of Second Chances by Kendra Smith, as part of the blog tour. My thanks to Vicky Joss from Aria for the place on the tour.

Charlie is a single mum unlucky in life. Her multiple jobs make barely enough to feed the family cat, never mind being able to give her son the life he deserves. So when an opportunity to make a lot of cash comes along, she simply has to take it.

Suzie has always wanted to be a mother. But fate has been cruel and now time is running out. Soon her final frozen egg will be destroyed and her last chance of having a baby will go with it. With her husband resolved to their childless life Suzie takes matters into her own hands.

Dawn is about to turn fifty and seems to have misplaced her mojo along with the car keys. But with an interfering mother-in-law and a gaggle of judgemental mums at her children’s school, it’s proving harder to find than a decent fitting bra. Especially after a series of highly embarrassing incidents…

Over the course of a year three lives are about to collide and as they do be prepared to laugh, cry and fall in love with these women as they discover how life can give you a second chance.

Suzie Havilland sat on a train to Waterloo and tried to stop a sob as she took a deep breath. She was remembering what happened on her way to the train station: such an idyllic moment. A mother with her beautiful toddler girl, the bright pink cheeks, a giggle as she kicked the carpet of copper leaves in the weak September sun. She was just adorable. Her blonde curls bounced out of her turquoise woolly hat and shone in the sunshine as she squealed in delight.

The mother bent over her, poked some curls back into her hat and then took her phone out of her pocket. She started swiping.

Suzie had sat at the red traffic lights and stared at them. She took a short, sharp breath and felt the familiar tightness in her throat. Why wasn’t that mother looking at her child?

I would never stop looking at her.

A car horn had honked behind her and she had jumped. She looked in her rear-view mirror. A bloke in a silver Audi was mouthing ‘stupid woman’. And then the tears. She pulled away from the lights as the salty liquid travelled down her cheeks and made its way across the fine wrinkles, her laughter lines – oh how funny – to the edges of her mouth.

She drew in to the kerb and yanked on the handbrake, turned the engine off. She placed both hands in her lap and took a deep breath. The silver Audi whizzed past her at speed and blasted its horn, making her shudder. She sat staring for a while at her cherry red manicured hands in her lap then, calmly, opened the door and got out.

She shivered as a watery sun shone on her. She had her eyes on something else and wasn’t bothered about the freezing air around her. As she walked toward the swings, she could hear a gleeful cry from the little girl pushing herself with her feet backwards and forwards, the sun streaking across the rubber flooring of the playground. The hat had been thrown off; the little girl’s golden hair was flying out behind her as she swung up and down. Laughing, squealing in delight.

Suzie walked over to a bench and sat down. The mother was nowhere to be seen. Suzie glanced around, worried for the little girl. She was just about to leap up and look for her when the mother appeared.

The mother took hold of the swing and started pushing the toddler, who giggled. ‘Higher, Mummy, higher!’ Little dimples formed in the toddler’s cheeks as well as the flush of pink from the chilly day. Suzie was mesmerised by her: she watched as she lifted up both her legs on each swing in perfect parallel unison, chubby legs encased in red polka dot woolly tights.

Suzie clutched the side of the bench and stared at her hands. Her knuckles were white.

Here was a child so very like the one she imagined she might have one day. She needed a coffee; she needed to get to work, she needed to get out of there. The mother looked over at her and smiled. A look flashed across her face, probably wondering why Suzie was there without any children. She felt utterly out of place in her work outfit, her urban high heels in a sunshine-soaked park. Kendra Smith has been a journalist, wife, mother, aerobics teacher, qualified diver and very bad cake baker. She started her career in Sydney selling advertising space but quickly made the leap to editorial – and went on to work on several women’s magazines in both Sydney and London. With dual Australian-British nationality, she currently lives in Surrey with her husband and three children.