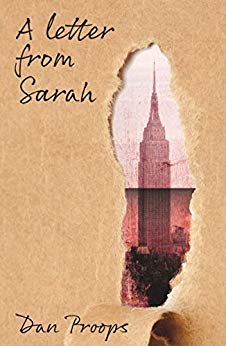 Welcome to my spot on the blog tour for A Letter From Sarah by Dan Proops. I have an extract to share with you today. My thanks to Kelly Lacey from Love Books Group Tours for the place on the tour.

Adam’s sister, Sarah, has been missing for seven years, but he hasn’t given up hope of finding her. He is a sculptor and lives with his bedridden father who is a bully and a curmudgeon.

One morning, as the anniversary of Sarah’s disappearance nears, Adam receives a letter from her and she is apparently alive and well, living in New York. Adam travels to Brooklyn to search for Sarah as he’s desperate to see her, but she seems determined to avoid him.

Sarah’s letters arrive weekly, but she continues to remain elusive. Adam is perplexed by Sarah’s requests for secrecy, as is his father and his girlfriend, Cassandra.

He is determined to find her, whatever the cost to his wellbeing, health and sanity….

She’d been missing for seven years. They weren’t looking for her anymore. There’d been the occasional sighting which gave rise to hope, but they’d been mistaken happenings, and he’d wished one of them had come to fruition; the hardship of maybe, and might be, was hard to take. He preferred nothing. And wanted to be left alone with grief untainted by the glimmers produced by sightings in this country and others. He was nearing the anniversary of her disappearance, when she’d been missing for a week, then a month, then a year. He remembered the early articles, short pieces at first, then half a page. The press had been indifferent in the beginning, but as time passed there was a torrent of reporting from journalists.

He walked across the room to a mantelpiece, reached for a wooden box and opened it. The monochrome photograph was white at the edges as he’d held it so many times; it was the only one he could bring himself to look at. Her face was lit on one side, the other eclipsed in shadow. He sat in an old armchair holding the photo. She’d been a good sister, kind, thoughtful, always aware of his moods, whether sullen or optimistic. She’d lifted him when he was morose or lacked creativity, and had offered suggestions to help him overcome the times when inspiration was hard to come by.

There was a sound above him, a moaning wail, crying out for help, and a thudding sound on the ceiling. The voice was wheezy and there was some anger to it, so he put the photograph back in the box.

He trudged up to the first floor and stood for a moment, then reached for the bronze handle. It was almost dark in the room. The curtains were drawn, and he could make out his father, a silhouette, apart from some light slanting through the curtains that caught the side of his face. He had white hair, a beak of a nose and a white beard, greying at the edges. With impatience he turned to his son.

‘I thought you had some.’

‘I drank it. I could do with some more.’

His father shifted his weight so his back was against the wall. Holding a walking stick, he prodded the floor as if he was searching for something.

He closed the door and could hear his father coughing. He walked downstairs and put a kettle on a gas hob. The kitchen was cramped and smelt of grease. Adam heard the rumbling as the water boiled, made a pot of tea, found three digestives, and then heard the sound of the stick on the ceiling. Adam returned to his father whose face was softer when he entered the room.

Darius sighed and waved his stick in the direction of a side table. His face was grim with deep lines. Adam placed the tray next to his father who looked at it and shook his head, then bashed the stick against the table. Adam took a step backwards. Darius turned to his son.

‘You asked for three yesterday.’

His father looked perplexed for a moment, as if he’d forgotten something. He ran the stick in slow movements across the carpet, and Adam took one of the biscuits from the tray. His father asked about lunch. The discussions about the meal were difficult, as his father would sometimes change his mind after it was prepared and served. Today, Darius wanted fish, some trout, with lemon. He spoke in great detail about the meal, how it should be cooked, and was particular about the wedges of lemon.

‘Dad, are you sure you want the fish today?’

‘Of course I’m sure. Are we clear on the food front? Get me some more tea. My lungs are aching and my back hurts.’

Adam walked downstairs and sat in the armchair and his thoughts turned to Sarah. He held his cup of coffee, taking small sips, and looked across the room to some grey net curtains. He recalled the last time he’d seen his sister and how much pleasure she’d brought him in that last hour, in those last minutes. Dan has been a full time writer for six years and has completed four novels and a memoir. He wrote short stories as a teenager gleaning knowledge from his grandmother, the legendary advice columnist, Marje Proops.

Dan was a professional artist, and had a one man show at the age of fourteen in London. He’s had many exhibitions over a long career and his artwork was purchased by internationally acclaimed art dealer, Eric Franck. His artwork appeared frequently in the national press and his painting was featured in Image of the Week in the Times. One of his exhibitions was previewed in the Telegraphby columnist Colin Gleadell.

Dan lives and works in London. He is a Twitter influencer and has a following of 22, 000. Dan has been using the twitter platform for some years. In 2016 he had a wide outreach and his tweets were seen by 1.5 million users.

Dan lives and works in London.