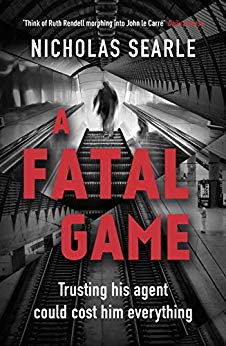 I’m so pleased to have an extract from A Fatal Game by Nicholas Searle to share with you today as part of the blog tour. My thanks to Ellie Hudson from Viking Books for the place on the tour.

The railway station is heaving with rush-hour commuters when the bomb goes off.

In the subsequent enquiry, serious questions are asked of Jake Winter, the British Intelligence Officer responsible for preventing the attack. Especially when it transpires that the bomber was his agent.

With his conscience – and his career – in tatters, Jake’s hopes rest on his new recruit, a young British-Asian man named Rashid. Recently returned disillusioned from the Middle East, and now enlisted into a new terrorist plot, Rashid seems to be the answer Jake, and MI5, have been waiting for.

But how can Jake know for certain when Rashid is his only source? Is history about to repeat itself or has Jake lost his nerve, haunted by his last mistake?

After all, who can you trust, when you no longer trust yourself?

Abu Omar paused as he left the truck by the rear door, looked around, then replaced his baseball cap and continued on his way. The surveillance teams noted his darting eyes and the tenseness of his frame. Jake rushed back to the ops room.

The powder-blue rucksack containing the books was readily visible on Abu Omar’s back as, glancing at the neat terraced houses, he strolled down Melwood Avenue, lined with wintry trees, weaved between parked cars, and crossed the road, while invisible cameras panned and tilted and zoomed and handed on to the next relay. The surveillance crews thought his calmness seemed forced, and distances were carefully maintained by using the meticulously rehearsed alternates, ready to pick up the follow if he diverted from his route. They knew Abu Omar’s associates would be close by, too, to ensure he wasn’t tailed. Each of them had his own covert retinue, whispering to each other, listening intently through earpieces, deconflicting, avoiding the blue‑on‑blue.

Jake watched him on the screen, his boy now, more heavily invested than he had been. Abu Omar’s shoulders swayed with youthful arrogance. As he left one screen he appeared on the next. As he turned into the park opposite the railway station Jake could see his face, indifferent, glassy-eyed as ever. He was chewing gum slowly. An analyst said, ‘Message!’ and almost at the same moment Abu Omar reached into his pocket for his phone. The fact that Abu Omar wasn’t supposed to be carrying a phone registered somewhere in the periphery of Jake’s consciousness but remained there as everyone watched. Abu Omar stopped to read the message and everything stopped with him. ‘It’s on the app,’ said the analyst, meaning it could not be decrypted. A hasty consultation took place on the ops room floor between the SIO, George and Jake.

‘None. He should phone it through.’

But Abu Omar didn’t. He paused a moment – it was measured later at 13.2 seconds – seemed to smile and then walked on.

‘Put a stop to it,’ said Jake, not loudly, but was ignored.

At this point Abu Omar disappeared from the screen. The camera pulled back at a speed that evoked a nauseous feeling in Jake’s stomach. Or possibly, viewed afterwards, it was fearful premonition. But it couldn’t have been premonition since he didn’t do anything other than gulp down the gobbet of bile that washed on to the back of his tongue. Presentiment of the end of life, perhaps. Presentiment was all. This, however, was the clear vision of hindsight.

The wider picture showed Abu Omar going into the men’s lavatory. The surveillance coordinator was shouting, ‘Eyes on! Eyes on! Now!’ and on other screens Jake could see a flurry of bodies surging forwards. The firearms commander ordered his officers forward, ready. The helicopter was called up. Nicholas Searle grew up in Cornwall and studied languages at the universities of Bath and Göttingen. After teaching for four years he moved to London to join the Civil Service. He had a hugely enjoyable twenty-three years in a variety of jobs dealing with security matters before going to work in a similar capacity for the New Zealand government in Wellington. In 2011 he returned to the UK, left the Civil Service and began writing in earnest. Nicholas and his wife live in Yorkshire.