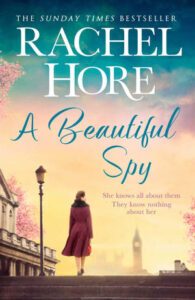 ShortBookandScribes #BlogTour #Extract from A Beautiful Spy by Rachel Hore

It’s my stop on the blog tour for A Beautiful Spy by Rachel Hore. I love this author’s books and I’m looking forward to reading this one, but in the meantime I have an extract to share with you today. My thanks to Anne Cater of Random Things Tours for the place on the tour.

From the Sunday Times bestselling author of Last Letter Home, a Richard & Judy
Book Club pick, comes a thrilling novel about a woman with an extraordinary life,
based on a true story.

Minnie Gray is an ordinary young woman. She is also a spy for the British government.

Minnie is supposed to find a nice man, get married and have children. The problem is it doesn’t appeal to her at all. She is working as a secretary, but longs to make a difference.

Then, one day, she gets her chance. She is recruited by the British government as a spy. Under strict instructions not to tell anyone, not even her family, she moves to London and begins her mission – to infiltrate the Communist movement.

She soon gains the trust of important leaders. But as she grows more and more entangled in the workings of the movement, her job becomes increasingly dangerous. Leading a double life is starting to take its toll on her relationships and, feeling more isolated than ever, she starts to wonder how this is all going to end. The Russians are notorious for ruthlessly disposing of people given the slightest suspicion. What if they find out? Full of
suspense, courage and love, A Beautiful Spy is a stunningly written story about resisting the norm and following your dreams, even if they come with sacrifices.

She guessed what the envelope contained from the London post- mark, but it was a while before she mustered the courage to fetch a knife from the kitchen drawer and slit it open. With trembling fingers she eased out the newspaper cutting, then sitting down at the table, unfolded and smoothed it out.

The headline struck her at once, taking her breath away. And that awful old photograph. She narrowed her eyes at the text underneath and fumbled for her spectacles. Her sight cleared and the small print came into focus. The words, hateful, sensational, burned into her. She read on, her finger tracing the lines, her lips moving silently. Her eyes prickled, her heartbeat stumbled. That wasn’t what she’d told the journalist, how could he have thought . . . Her hand flew to her mouth but her eyes remained glued to the dense lines of print. How could he?

When he’d telephoned out of the blue, that soft voice . . . it had soothed her, coaxed her to say more than she’d intended. It had all poured out of her, the rancour of years. ‘Don’t print that,’ she’d stopped to tell him at least once. ‘It is simply what I felt at the time. Half a century ago. My life is different now . . .’

He’d reassured her, told her not to worry, she could trust him. Why had she believed him? She knew about journalists, but he’d caught her at a weak moment.

An English Sunday tabloid. Anyone might have read it. One of them, perhaps. How stupid of her. They’d know where she was now. Suppose they . . . No!

She let the paper slip from her grasp and sat staring into the distance, allowing the memories to flood in . . . Rachel Hore worked in London publishing for many years before moving with her family to Norwich, where she taught publishing and creative writing at the University of East Anglia before becoming a full-time writer. She is married to the writer D. J. Taylor and they have three sons. Her last novel, The Love Child, was a Sunday Times bestseller.