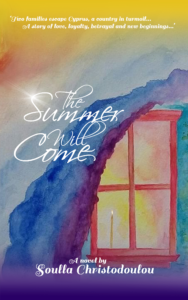 #BlogTour – The Summer Will Come by Soulla Christodoulou @schristodoulou2 @rararesources

Welcome to my stop on the blog tour for The Summer Will Come by Soulla Christodoulou. Thank you to Rachel Gilbey from Rachel’s Random Resources for the place on the tour.

I have some video content to share with you today! Soulla will be telling us about her book. First of all, here’s what it’s about:

Set in the 1950s, the story begins in Cyprus. EOKA, British rule, and the fight for Enosis (unity) disrupt the world of two Greek Cypriot families, living in different villages on the island. They are desperately trying to cope with the unpredictability of this fractious time. Circumstances over a five-year period push both families to escape to London where, as immigrants, they struggle to settle, face new challenges, trauma and cope with missing their homeland’s traditions and culture. Both families’ lives cross paths in London and it seems that happier beginnings could be theirs. But at what cost? A story of passion for a country in turmoil, family love, loyalty and treachery and how, sometimes, starting over isn’t always as imagined.

Thank you, Soulla, for such an interesting video about your book. Born in London to Greek Cypriot parents Soulla Christodoulou spent much of her childhood living carefree days full of family, school and friends. She was the first in her family to go to university and studied BA Hotel & Catering Management at Portsmouth University. Years later, after having a family of her own she studied again at Middlesex University and has a PGCE in Business Studies and an MA in Education.

Soulla is a Fiction author and wrote her first novel Broken Pieces of Tomorrow over a few months while working full time in secondary education. She is a mother of three boys.

She is a compassionate and empathetic supporter of young people. Her passion for teaching continues through private tuition of English Language and Children’s Creative Writing Classes as well as proof reading and other writing services.

Her writing has also connected her with a charity in California which she is very much involved in as a contributor of handwritten letters every month to support and give hope to women diagnosed with breast cancer. One of her letters is featured in a book ‘Dear Friend’, released on Amazon in September 2017.

When asked, she will tell you she has always, somewhere on a subconscious level, wanted to write and her life’s experiences both personal and professional have played a huge part in bringing her to where she was always meant to be; writing books and drinking lots of cinnamon and clove tea!

She also has a poetry collection, Sunshine after Rain, published on Amazon and The Summer Will Come is her second novel. She is currently working on a third novel Trust is a Big Word about an on-line illicit relationship that develops between two people.