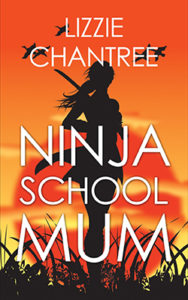 I’m so pleased to be posting today as part of the blog tour for Ninja School Mum by Lizzie Chantree. Thank you to JB from Brook Cottage Books for asking me to take part.

I have an extract to share with you today but first, here’s what the book is about:

Obsessive-compulsive school mum, Skye, is a lonely elite spy, who is running from her past whilst trying to protect the future of her child. She tries hard to fit in with the other parents at her son’s new school, but the only person who accepts her unconventional way of life is new mother, Thea.

Thea is feeling harassed by her sister and bored with her life, but she suspects that there is something strange about the new school mum, Skye. Thea has secrets of her own and, although the two become unlikely friends, she hesitates to tell Skye about the father of her own child.

Zack’s new business is growing faster than he could have dreamed but, suddenly, he finds himself the owner of a crumbling estate on the edge of a pretty village, and a single parent to a very demanding child. Could he make a go of things and give his daughter the life she deserved?

When three lives collide, it appears that only one of them is who they seem to be, and you never know who the person next to you in the school playground really is.

Skye tapped her feet impatiently as she looked at the ominous grey clouds hovering above the playground and tried to rein in the anger she could feel blazing in her chest. She had learned the skill of outwardly controlling her emotions and appearing like she hadn’t a care in the world long ago, but if her son came out of school crying because a more boisterous kid had poured water on his head, or scribbled all over his carefully written work again, then she would struggle not to pick the culprit up by his leg and throw him into the neatly manicured flowerbeds that surrounded the glossy green windowsills of the school building.

She noticed the quiet red-haired woman who was sitting on a nearby bench, glancing longingly at the same group of school mums again. They were all huddled together like a rugby scrum, chatting busily about their day. Skye wondered why the redhead didn’t get up and join them if she wanted to be part of the group so badly, but she could tell from the woman’s body language that it was never going to happen. She obviously lacked the confidence or courage to break into such a tight-knit group of friends.

A movement to Skye’s left caught her eye and she noticed the woman with the mop of curly hair and inquisitive eyes watching her again. She was frowning in concentration before realising that she had been spotted and seamlessly blended back into the throng of people waiting for their children to appear. Award-winning inventor and author, Lizzie Chantree, started her own business at the age of 18 and became one of Fair Play London and The Patent Office’s British Female Inventors of the Year in 2000. She discovered her love of writing fiction when her children were little and now runs networking hours on social media, where creative businesses, writers, photographers and designers can offer advice and support to each other. She lives with her family on the coast in Essex.