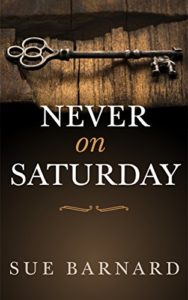 Posted on 6th September 2017 By Nicola

I’m pleased today to be on the blog tour for Never on Saturday by Sue Barnard today. Thank you to Brook Cottage Books for the place on the tour. I have a short Q&A for you, along with an extract and a giveaway, but first here’s what the book is about:

Two stories, two heartbreaks: one past, one present…

Leaving her native France and arriving in North Wales as a postgraduate student of History and Folklore, Mel is cautiously optimistic that she can escape from her troubled past and begin a new and happier life.

She settles into her student accommodation and begins work on her thesis, concentrating particularly on one fascinating manuscript: a compelling and tragic tale of a cursed medieval princess.

Then she meets Ray – charming, down-to-earth and devastatingly handsome. Within days, Mel’s entire world has transformed from lonely and frustrated to loving and fulfilled. Despite her failure with previous relationships, she allows herself to hope that this time, at last, she can make it work.

But Mel’s dreams of happiness are under constant threat. She is hiding a dark and terrible secret, which Ray – or indeed anybody else – must never ever discover…

1.  Where did your inspiration for Never on Saturday come from?

The story is based on an old French legend which I first encountered a few years ago, during a visit to the area where the legend is based.  A month or so later, back at home, I was mowing the lawn when out of nowhere a line of dialogue popped into my head: “My name isn’t [X], it’s [Y]” – where [Y] is the name of the character in the original legend.  Unfortunately I can’t say much more than that here, as it would give away too much about the story!

I can say, though, that I get a surprisingly large number of my ideas when I’m mowing the lawn.

There’s a story on my blog which might be of interest: http://broad-thoughts-from-a-home.blogspot.co.uk/2014/08/stranger-than-fiction.html

What a lovely story, Sue!

3.  I note you are also an editor for Crooked Cat Books. Do you find it helps you as an author, or are you harder on yourself because of it?

A bit of both, I think; the two aren’t necessarily mutually exclusive.  Working on manuscripts written by other authors makes me a lot more aware of the standards required, and as a result I’ve learned to look at my own work much more critically.  But that doesn’t mean I can go it alone – all writers need writing buddies and beta-readers.  There’s always a danger of getting so close to one’s own work that one can lose all sense of objectivity, and a fresh pair of eyes can work wonders.

I’m currently working on a Wuthering Heights spin-off novel about Heathcliff.  I recently had a light-bulb moment about how the story could end, but I still need to work out how it’s going to get there.

Come to think of it, that also happened with Never on Saturday – I had the ending long before I’d written the rest of the book…

I now have an extract to share with you from the book.

“Here you are!” Ray had appeared at her side, clutching two large white bread rolls, each wrapped round with a paper serviette. “Hang on to these for a moment, would you? I need to go back for the coffees.”

Mel laid aside the binoculars before lifting up the top of one of the bread rolls and peering cautiously inside. The bread itself was feather-light, and the filling consisted of two steaming slices of dark-pink meat, each edged with a strip of crisp golden-brown fat. Her mouth watered at the bewitching aroma, but she forced herself to wait until Ray had rejoined her and placed two paper cups on the table in front of them.

“So, this is a bacon bap?” she asked, as she handed one back to him.

“It is indeed!” He pulled the paper serviette aside and took a large bite from the roll, chewed for a moment, then closed his eyes as if in rapture. On opening them again, he noticed that her roll still remained untouched.

Mel picked up her roll and took a cautious nibble. The flavour was quite unlike anything she had ever experienced; smoky, savoury, salty and sweet, all at the same time.

“Mmm, this is divine!” she murmured. “I can’t believe I’ve lived for so long without tasting this.”

Ray grinned. “And you come from France – the spiritual home of good food?”

Mel nodded as she prepared to take another bite. “I’d always thought it was. But I suppose this must prove that there’s still room to learn more!”

They finished their rolls in companionable silence. As they sipped their coffee, Mel took up the binoculars and focussed on the tops of the pine trees.

“What are you looking at?” Ray asked.

“Those birds up there. What are they?”

Ray picked up his own binoculars and followed her gaze. “Oh, they’re crossbills. They feed on the seeds from the pine-cones. Can you see the shape of their beaks?”

“Cross-bills? Oh, yes, I see now. In France, we call them becs-croisés. I didn’t realise you had them round here. That’s probably why I didn’t recognise them.” She sighed.

Mel forced a smile. “The last time I saw any of them was in the pine forests in the Vendée. They reminded me a little of home.”

Feeling a tear pricking the corner of her eye, she quickly turned her head away and focussed even more intently on the birds. Why did such a seemingly trivial thing as the sight of a flock of crossbills make her so upset? But she would not cry – not here, not anywhere. She would enjoy the day. Whatever else might be troubling her, she would enjoy the day.

In fact, she had another six days before she needed to trouble herself about anything at all.

Yes, she told herself firmly. She would enjoy the day.

If all that has got you interested then you can buy the book from Amazon in paperback and ebook.

And if all that wasn’t enough then you have a chance to win a signed copy of the paperback plus ten runner-up prizes of a signed Never on Saturday postcard.
a Rafflecopter giveaway Sue Barnard is a British novelist, editor and award-winning poet whose family background is far stranger than any work of fiction.  She would write a book about it if she thought anybody would believe her.

Sue was born in North Wales but has spent most of her life in and around Manchester.  She speaks French like a Belgian, German like a schoolgirl, and Italian and Portuguese like an Englishwoman abroad.

Her mind is so warped that she has appeared on BBC TV’s Only Connect quiz show, and she has also compiled questions for BBC Radio 4’s fiendishly difficult Round Britain Quiz.  This once caused one of her sons to describe her as “professionally weird”.  The label has stuck.

Sue joined the editorial team of Crooked Cat Books in 2013.  Her first novel, The Ghostly Father (a new take on the traditional story of Romeo & Juliet) was officially released on St Valentine’s Day 2014.  Since then she has produced three more novels: Nice Girls Don’t (2014), The Unkindest Cut of All (2015) and Never on Saturday (2017) – all published by Crooked Cat.

Sue lives in Cheshire with her extremely patient husband and a large collection of unfinished scribblings.